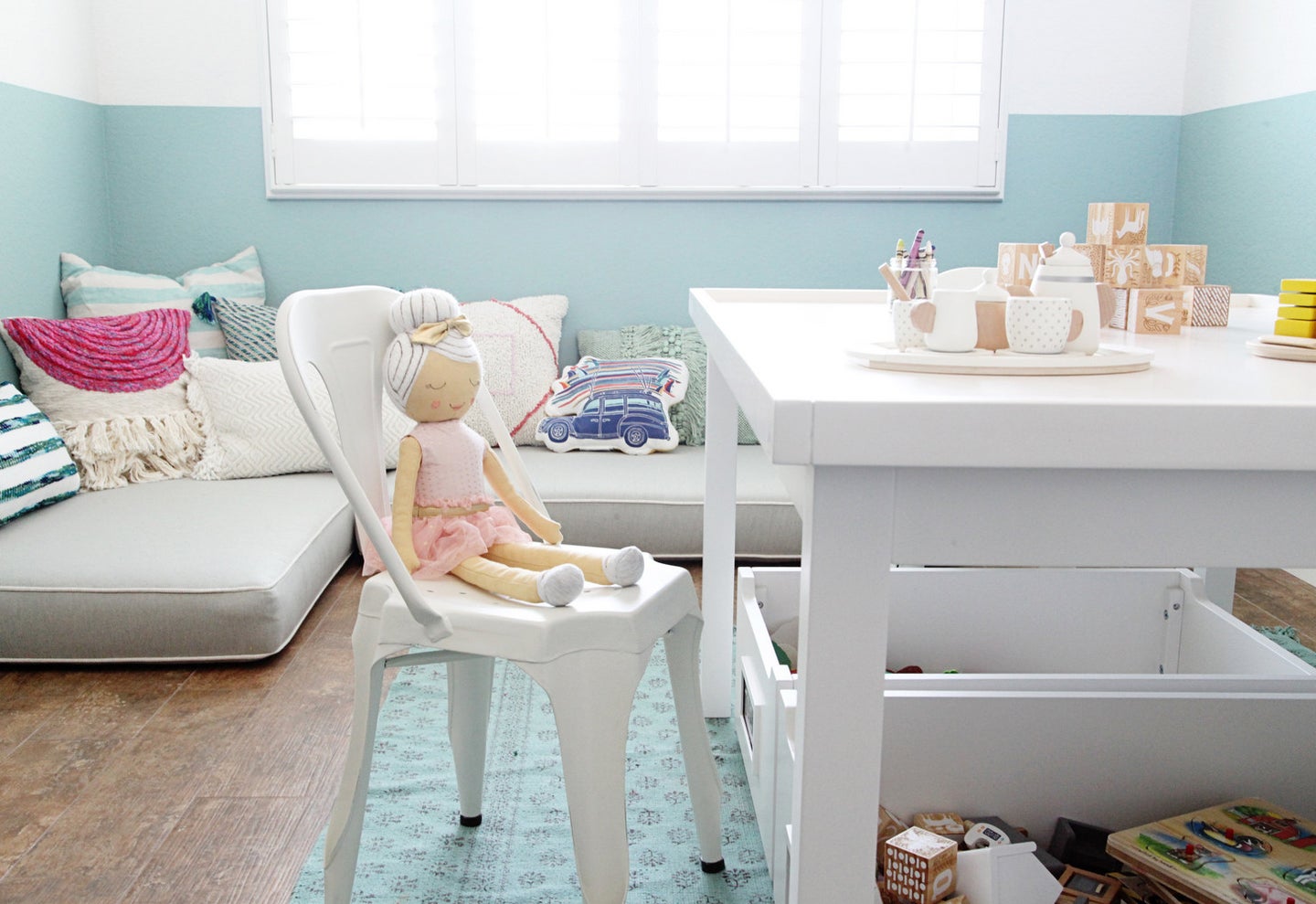 Los Angeles-based interior designer Irene Lovett enjoys creating children’s spaces so much that she launched an off-shoot of her firm, Designstiles, that focuses exclusively on creating nurseries, playrooms, and kids bedrooms. Since then, Designstiles Kids has become one of the region’s most sought after firms for children’s interior design.

However, Lovett approaches kids’ rooms with a bit of grown-up flair. “I want them to feel bright, happy,” says Lovett. “But not too kid-ish. I don’t ever do theme rooms, like a Thomas the Train or Paw Patrol bedroom.”

Rather, says Lovett, color and pattern end up being the theme of the space. “One of the reasons I love doing kid spaces is that you can go a little wild with color,” she says. “Adults tend to want to be safer in their living spaces and master bedrooms—they are often scared to do bold colors and patterns in those spaces; they think they’ll get tired of it. But in their child’s room they’ll get into it, which is a lot of fun.”

Read on for some of Lovett’s design ideas for kid-friendly spaces.

In this beach house playroom, the wall jutted out awkwardly on one side of the room. “It made this weird unnecessary ledge,” says Lovett. “To make it into useable space, we added reclaimed wood shelves above for toys and books.” Behind the shelves, a Schumacher wall covering adds interest.

Put cushions on the floor.

Here, Lovett had floor cushions made according to the dimensions of twin beds. “Kids love to be on the floor, and this is a way to create a fun, cozy reading and playing area,” says Lovett. The kids also sometimes put sleeping bags on top of the mini mattresses for sleepovers.

For dimension, walls are painted a beachy-aqua hue on the lower half and white above. Some of the throw pillows pick up the same aqua tone, as does the rug, which grounds the space and exudes a bit of a bohemian flair.

Cater to the kid’s interests without being theme-y.

The boy who lives in this room is a Star Wars fanatic. Yet, infusing the space with a Star Wars theme would have kept the décor from feeling fresh for years to come since the boy would eventually outgrow his current obsession. Since it was still important to add something that nods to his affinity, Lovett had the walls between the bookshelves covered with a Cole & Son wall covering in a star motif.

Add a pop of color that differs from the main color palette.

The room is awash in tones of blue, yet Lovett felt it was important to incorporate a couple unexpected elements that would add a bit of fun. A desk was custom made and painted a vibrant orange, which is repeated in the Lulu & Georgia lamp on the bedside table.

The dresser was dated, but rather than buy a new one Lovett encouraged the homeowner to paint it blue and white and swap out the hardware—inspired by a photo of a similar one they liked. “It turned out great,” she says. “The hardware was also switched out, and it looks like a whole new piece,”

Put pattern on the ceiling.

When this little girl’s bedroom was installed, she was on the young side. “The mom loved the idea of wallpaper, but she was concerned that if it was on the walls her daughter would destroy it,” says Lovett, who suggested putting the Walnut wall covering on the ceiling instead. The pattern, she continues, might have even been too busy for the walls. “Used on the ceiling, it draws the eye up.”

Go for the princess effect subtly; avoid using too much pink.

This little girl is very into the princess thing, says Lovett. While an overly pink, princess-themed room would have been over-the-top, Lovett made sure the space felt regal enough for its young inhabitant by installing a high canopy bed and furry shag rug. While the room has plenty of pink, it’s paired with other colors including coral and mint green.

Incorporate inexpensive art that can be switched out.

The little girl loves butterflies now, but she may not always be in favor of them as part of her décor. Lovett found inexpensive ways to incorporate them into the aesthetic including in the bedding and in a lovely print from Minted, which came framed. “The print wasn’t expensive so if it needs to be swapped out in a few years it’s no big deal,” says Lovett.

Go glam where you can.

This room needed to include a little sparkle, and Lovett found bedding that has a bit of shimmer to it. She also came across a chair from Restoration Hardware Teen that has a back upholstered with glittery fabric. “We didn’t want to overwhelm the space with crazy color and pattern, and the chair added a cool effect to the room while appealing to the little girl’s desire for sparkle,” says Lovett.