Curl up with an expertly crafted espresso or latte at one of the best cafes in the Emerald City. 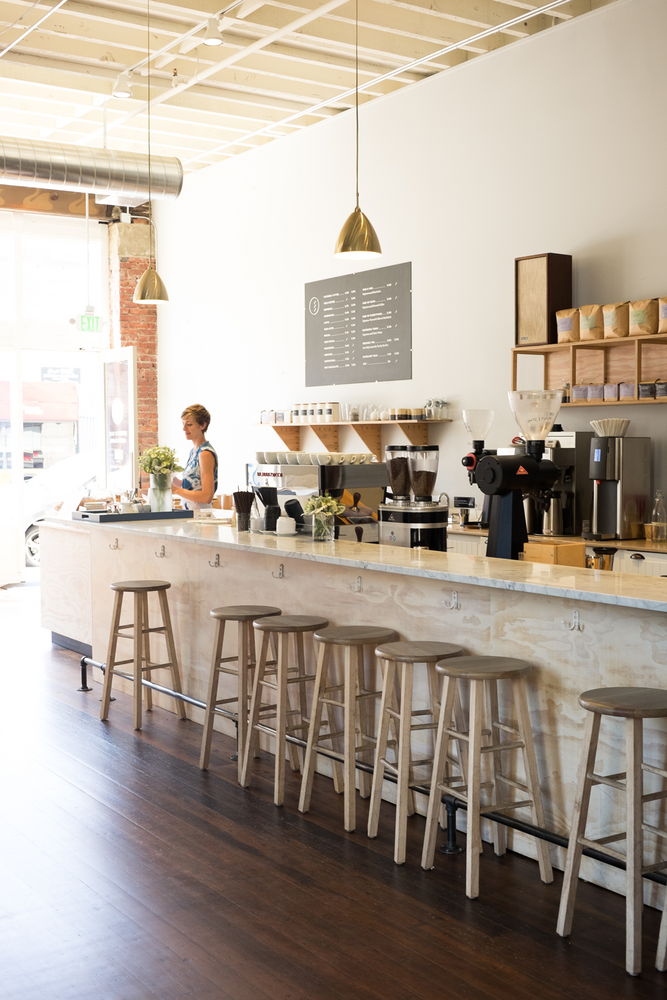 Seattle is America’s coffee capital. Whether it’s the city’s embrace of counter culture coffee shops in the 1960s never going away, the influence Starbucks sparking a global gourmet coffee revolution from the Emerald City, or the dreary weather that leaves citizens needing a caffeine jolt, people there love their java. With, at last count, 1,640 coffee shops in its metropolitan area, there are a wealth of options for finding great brew around the Puget Sound. You can’t possibly hit them all, so we’ve curated our favorite cafes for you to relax for an afternoon with a perfectly pulled shot of espresso, a nuanced cup of single origin pourover, or an artfully crafted latte.

In Downtown Seattle, Top Pot’s spacious flagship is a bright two-story cafe and doughnut shop lined with bookshelves and decorated with a 1950s vibe. It’s definitely worth stopping by for a fresh doughnut if you’re around Fifth Avenue. For a smaller, cozier place to score Top Pot’s amazing confections, head to the Capitol Hill location. Tucked away on a leafy street apart from the neighborhood’s main thoroughfares, sip your coffee from sturdy mugs while enjoying the best old fashioneds and apple fritters you’ll find anywhere.

A favorite destination for Seattle coffee aficionados, Victrola’s flagship location offers free coffee tastings and tutorials to the public every Wednesday at 11 a.m. The company built this cafe inside a 1920s auto dealership with large front windows that allow sunlight to stream in. Single origin coffees (beans grown in one geographical area instead of a blend from multiple locales) are rotated on the menu. Try the pour over brewing method, which baristas will tell you is the best way to experience the coffee’s distinct flavors.

Owners Kayla Blincow and Tess Smedley met at a Seattle restaurant and bonded over their mutual love of home baking and canning. They decided to open Preserve and Gather together in Seattle’s Greenwood neighborhood as a place for people to drink espresso and enjoy house-made fare like ham biscuits, apple toaster pastries, and pickle plates. The cafe is a bright, inviting space with Mid-Century design touches, where you’re likely to stay awhile. But forget about bringing your laptop—Kayla and Tess decided to not install wifi to foster more socializing.

The dark-stained wood-paneled walls at Zoka’s Tangletown location make this expansive coffee shop feel warm and intimate. Let yourself sink deeply into an overstuffed leather chair with a latte, while students peck away at their laptops and locals chat, play board games, or read the paper.

Outside Ladro’s shop in Fremont (the neighborhood that wryly declares itself the “Center of the Universe”), the large adirondack chairs lining the cafe’s exterior walls are the perfect perch on a sunny day. Order a Medici (a mocha with orange zest) to drink while nibbling on a salted caramel brownie from Ladro’s bakery.

Storyville began as an online-only coffee roaster a little more than a decade ago in the Seattle suburb Bainbridge Island. In 2013, it started opening physical locations that quickly became local favorites. At the Queen Anne location, curl up in a chair next to the fireplace, and if you’re lucky, you may be around when staff members decide to give everyone a free slice of chocolate cake.

For those who prefer a lighter roasted coffee, head down to Seattle’s Pioneer Square for a cup at Elm. Owner and Seattle native Brendan Mullally roasts his beans onsite inside this modern and minimalist cafe. Pull up a stool at the bar to enjoy an Americano with a pastry from the nearby bakery-restaurant London Plane.

Acclaimed Seattle chef Renee Erickson creates some of the city’s most beautiful restaurants, and her doughnut shop General Porpoise is no different. The white walls,

and marble counters are accented with pops of color from wood shelves and gold wall sconces, making for a relaxing and airy atmosphere. Head there on a warm day, and the glass garage door will be open while you eat your chocolate marshmallow cream-filled doughnut and sip an espresso.

Founded in 2002, Umbria’s master roaster, Emanuele Bizzarri, comes from a family of coffeemakers, with his grandfather founding Torrefazione Perugia in Italy and his father creating Torrefazione Italia in Seattle (which sold to Starbucks). Umbria’s cafe in Seattle’s historically Scandinavian neighborhood of Ballard has an old brick wall that spans the length of the shop, a leather sofa and a relaxed vibe. Umbria evokes the feeling of a European cafe where people hang out as if it were an extension of their living room.

This legendary Seattle-based roaster opened more than two decades ago and now has outposts in Portland, LA’s hip Silverlake neighborhood and on New York’s Lower East Side and Bushwick. Vita has six locations across Seattle, with its Capitol Hill shop featuring local artists on the wall and chairs out front for prime people watching.

Tucked inside Seattle’s best bookstore, Elliott Bay Book Co., Little Oddfellows is a crisp white cafe serving coffee from Caffe Vita along with housemade baked goods, sandwiches, and salads. In the evening, when it’s time to turn away from caffeine, you can order beer or wine while you skim that book you just bought a few feet away.