She considers her Venice home her “first solo art project.” 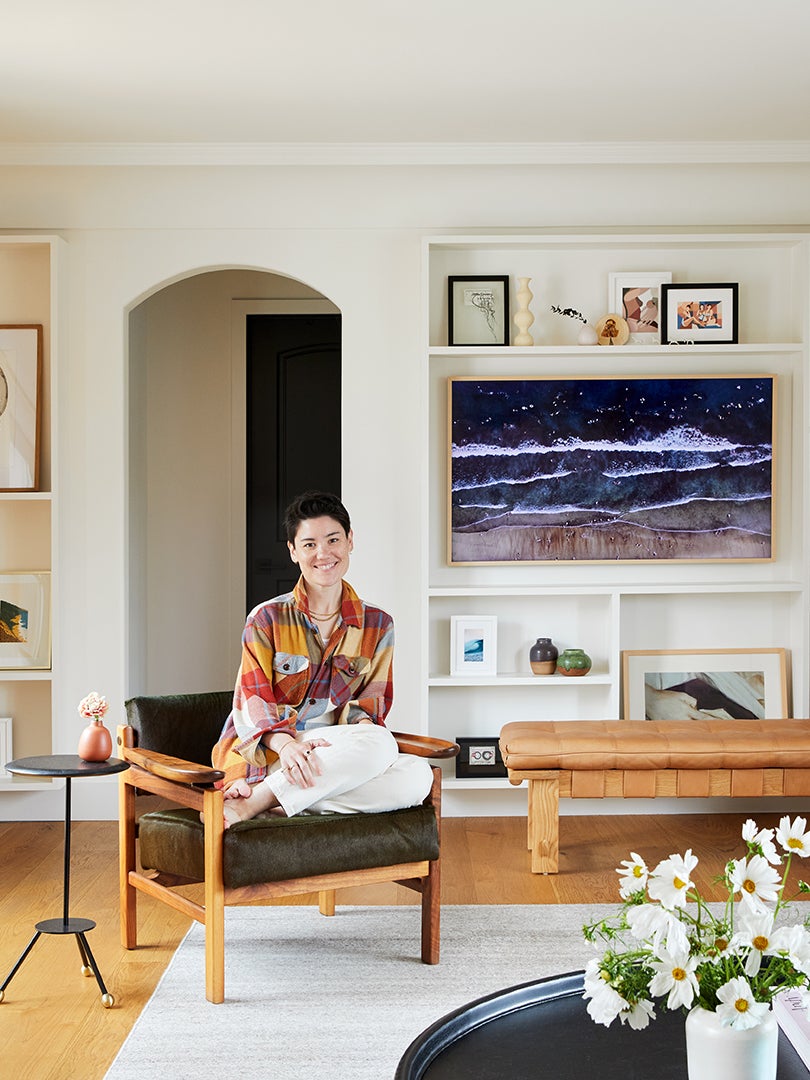 Meredith Chin only had 20 minutes to tour her Spanish-style Venice, California, house before deciding to put an offer on it, but that was long enough for the writer-producer-director to picture her life there. “There was no chatter in my brain,” recalls Chin. “There was something about the energy. I felt like I could dedicate myself to making it home.” When she stepped out into the central courtyard for the first time, she envisioned transforming the space into an open-air movie theater where she could debut her work. “Last month I did a screening of my short film under the stars,” shares Chin. “I just felt really lucky that I could have that in my own personal space.”

Chin considers the three-bedroom, two-bathroom property her “first solo art project”; buying the place not only marked her transition from longtime renter to homeowner, it overlapped with a big career shift. After a decade of working in tech and bouncing around between startups, Chin transitioned into the film industry. Her feature documentary, Duty Free, premiered on PBS’s Independent Lens last fall as she was wrapping up her first short, The Girl. Since settling down in this space in 2020, Chin reveals she has been able to focus her efforts on the writing side of things. “It has certainly been a creative haven for me,” she shares. And not all the hard work has happened in her office: The house was in much need of a renovation, one that required the help of interior designer Mat Sanders.

“It was a doozy,” Sanders recalls of the home’s superdark hardwood floors, which he swiftly replaced with wide-plank oak boards. But much like Chin, he was immediately drawn to the fabulous outdoor area situated at the heart of the home (French doors offer access to the exterior space from various parts of the house). “It has one of my favorite floor plans,” he says.

Floating the sofa in the middle of the living room made way for a little entry vestibule, complete with a console table, bench, and coat hooks—that way when guests come through the front door “you don’t feel like you’re walking right into a room,” explains the designer. Visitors are immediately greeted by the sight of an unusual gallery wall: There were very few nails involved in the making of this 3-D version. Instead, by building out nooks with ledges, Sanders gave Chin spots where she can lean various objects and artwork made by her friends (all of the pieces, except for one, are by female artists). “I didn’t want to buy random strangers’ art,” attests Chin. The nonpermanent solution lets her play the role of curator, and it also helps hide the fact that there’s a Samsung Frame TV mounted in the middle.

When it came to the kitchen, Chin had decided she wanted black cabinets even before she brought Sanders onto the scene. The question was how to pull it off without making the room feel like a dungeon. After swathing the former teal-colored cupboards in a deep charcoal hue, Sanders introduced hits of brass with the new Park Studio hardware and a mixed-metal sink faucet to “edge it up.” The designer also replaced the old “Cheesecake Factory–esque” pendant lamps over the island with a modern globe chandelier from TRNK NYC and covered the backsplash in 2-by-2 black zellige tile from Clé.

“Once those things went in, I was like, this doesn’t feel dark; this feels classy,” says Chin. Around the corner in the dining area, Sanders turned one of the shelving niches into a bar with a custom fluted walnut cabinet, glass shelves, and an integrated sconce. He loaded the entertaining zone with vintage barware—some of which came from his many trips to estate sales and antiques markets in Tucson, Arizona, where he retreated during the height of the pandemic. “I would just load up my jeep and haul stuff back, and a lot of it went to this project,” he says.

A fresh tub, roman shades, and an Allied Maker pendant light make the tiny primary bathroom feel just as worthy. (Chin went against her contractor’s advice to get rid of the tub altogether, and she and Sanders made small tweaks to the soaking spot instead.) “It’s beautiful having the windows right there,” says Chin. On the occasions she opts for a bath, she can look out onto the thriving kumquat trees.

“One solution I love for small bathrooms is to use the same material on the wall and the floor,” Sanders says of wrapping the perimeter of the room with the same marble tile on the ground. The large green zellige tile in the shower was the splurge of the space, but Chin doesn’t regret a thing. “I thought, If I’m really going to invest in my dream home, I should make it exactly what I want it to be,” she says. “Whenever I’m in there, I just analyze the tile.”

In the main bedroom, Sanders devised a custom padded headboard where leather cushions are slung from brass tubes affixed to the wainscoting. The vaulted ceiling called for a moody perforated light fixture that, when turned on, creates the illusion of sleeping under the stars. Of course, if Chin ever really wants to sleep under the stars, she can catch the real show in her private courtyard.

Object that gets the most use: The Scandinavian sheepskin lounge chairs in my living room. They are so cozy and feel like little hugs. —Chin

Biggest splurge: The Clé tile for the primary bath and kitchen backsplash. I could have found a comparable color at a lower price point, but there is just nothing like that beautiful shine. —Chin

Biggest save: The art on my gallery wall. I am lucky to have a lot of artists in my life who have gifted me some beautiful work that I get to proudly display. —Chin

Fabric in my space that is so me: The plum couch feels classy, but with a wink.  —Chin

I loved working with: Lulu and Georgia and TRNK NYC. —Sanders

One thing I wish I knew before renovating: How long it would take and how much of an ongoing process it is. —Chin