twilight of the gods

On the eve of its demolition, domino catches a final glimpse of Cornelia Guest’s fabled family seat. 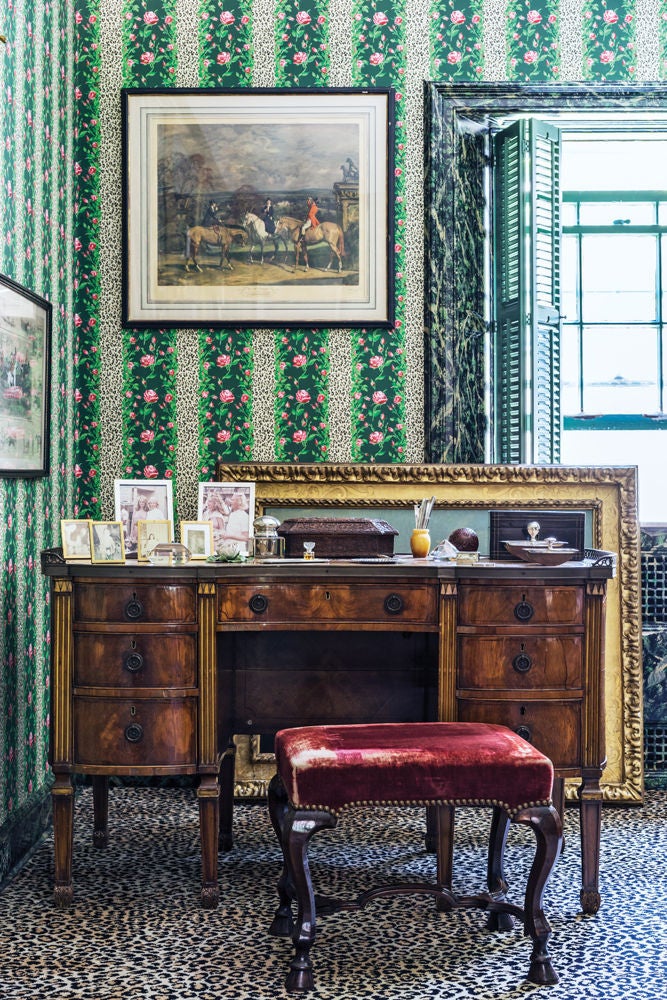 The dining room is home to quaint artifacts such as vintage deer antlers and a velvet-covered child’s chair.

In Old Westbury, the sprawling 15½-acre Templeton estate is, to put it mildly, grander than the typical family home. Flanked by topiaries created by Russell Page, a virtuoso of English gardening, the 12,000-square-foot, red-brick Georgian-style house boasts 28 rooms (not to mention a guesthouse, pool, vegetable garden, greenhouse, and stable). Originally the guesthouse of the White Eagle estate, designed by Carrère and Hastings, the gracious abode became the primary residence of designer

’s grandfather Frederick Guest when he inherited White Eagle but craved something more intimate for his family.

Cornelia sold the house late last year to an owner who intends to knock it down and build anew. But even now, on the eve of its destruction, the structure thrums with echoes of its storied past. After all, it was the home of the late polo champ Winston Guest and his wife, the legendary CZ. A muse to artists such as Salvador Dalí and Diego Rivera, a confidante to cultural giants, including Diana Vreeland and Truman Capote, and an inspiration for fashion designers Mainbocher and Oscar de la Renta, CZ cut a wide swath through the 20th century.

A mantel in the dining room where CZ and Winston once hosted guests, including Andy Warhol and the Duke and Duchess of Windsor.

Today, Templeton’s bold leopard-print carpeting has faded, but its legacy lives on. Cornelia has kept, for instance, certain mementos of her father’s hunting expeditions, though she’s adopted a vegan, “cruelty-free” lifestyle. “It makes you feel so much lighter,” she says of her decision to forgo animal products. Her cookbook,  Cornelia Guest’s Simple Pleasures , contains recipes for tempting vegetarian fare as well as pictures of her mother’s collection of Dodie Thayer cabbage dinnerware. And though her Templeton involves significantly more tempeh than CZ’s, Cornelia has followed in her stylish footsteps by creating a collection of sophisticated faux-leather handbags and a line of jackets in collaboration with Project Gravitas. An active supporter of the Humane Society of New York, she has been featured multiple times in PETA’s campaigns against fur and carriage horses.  Even as she prepares to leave her ancestral home, Cornelia is planning her next residence and selecting the heirlooms that will accompany her there. “I believe everything has a soul,” she says, referring to her family’s possessions. “Every plate and painting must come out and see the light of day.”

CZ salvaged this garden gate, first owned by her mother, Vivian Wessell, from her childhood home.