A Kaleidoscopic Brooklyn Rental Designed From the Rugs Up

In just one month. 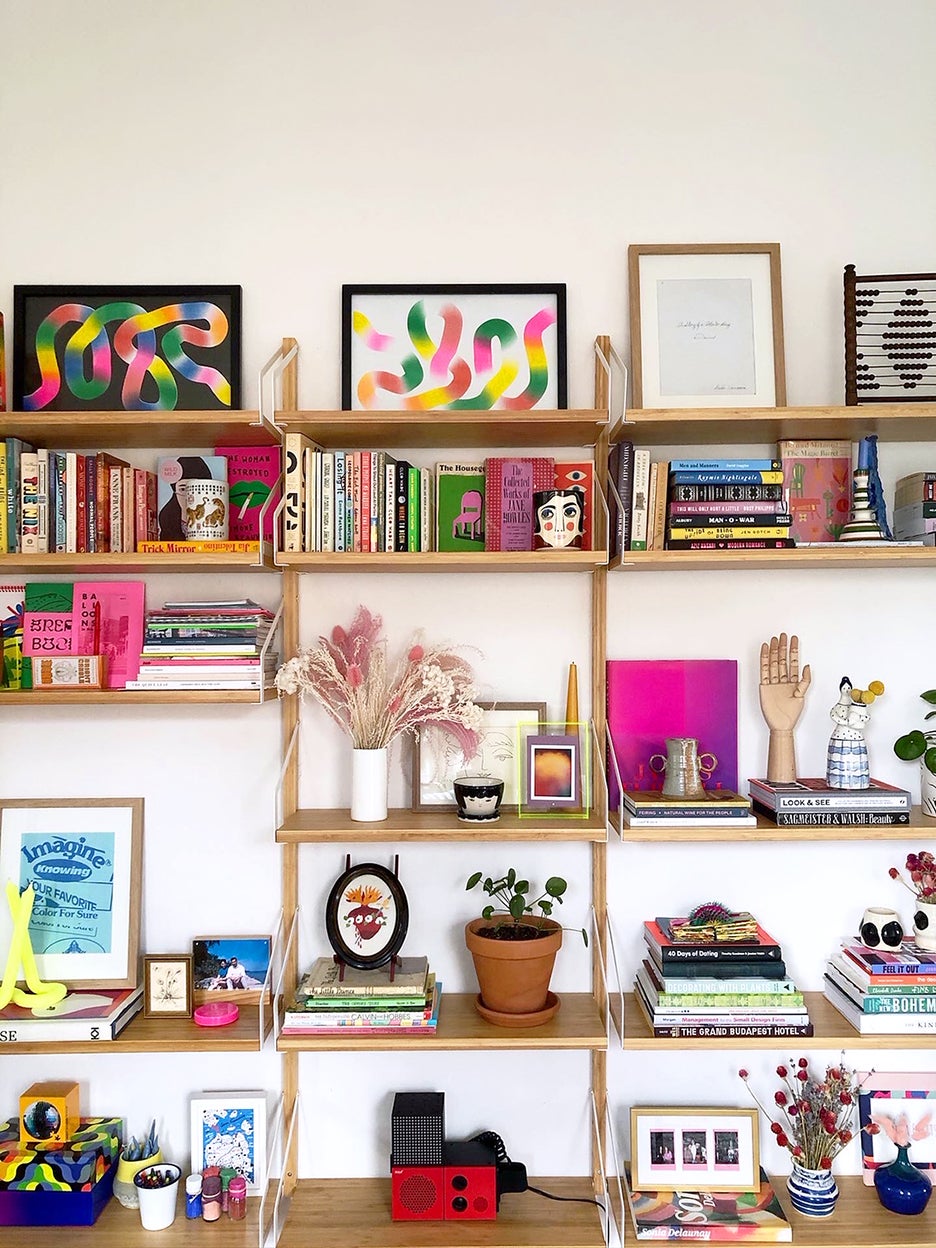 As soon as she moved into her Park Slope, Brooklyn, apartment, Anna Brettschneider knew something had to be done about the all-white kitchen. A rug designer, she was not particularly keen on its tile floor and somewhat sterile vibe. “It was driving me crazy,” she says. So one of the first things she did was get a can of paint—Spring Lilac by Benjamin Moore—and give it some personality.

Although she and her boyfriend, graphic designer Garrett Albury, have been living in the space for less than two months, they transformed it entirely after just a few weeks. They had plenty of time to plan: They knew that both of their leases were up at the end of July, so in June they began their search for a space with a July 1 move-in, which would give them a full month to gradually relocate. In anticipation, Brettschneider voraciously pinned. “I have an ultimate apartment Pinterest board, and boards within the board,” she says. “I started to see a theme among the inspiration I had, and then I thought about how I could apply that to the pieces I already owned.”

Many of the decorative items that the couple added to their new home came from their respective apartments, with one big exception: the rugs. “I was looking for them forever—Etsy is such a deep rabbit hole, and I went through hundreds of pages of Moroccan ones,” says Brettschneider. She specifically wanted vintage rugs, and ones that felt different from the patterns and hues that she saw over and over again. When she found her bedroom rug—which happened to already match her bedding and some of her artwork—it was like striking gold (reasonably priced gold, that is). “It has a checkerboard element that I really wanted, along with modern pops of hot pink—you wouldn’t think that it would be vintage because it looks so modern,” she says.

It was that rug that inspired her second paint decision in the space: the cobalt blue French door to the couple’s bedroom, painted with Coming Soon’s Blue Is the Coolest Color collaboration with Backdrop. The third paint moment—the dark green wall in their bathroom—was a suggestion from Albury. “At first, I was like, no, it’s going to be too dark,” she says. “But it really worked out and goes perfectly with our checkerboard shower curtain.”

In addition to paint and rugs, a few more small tweaks made the rental feel a little less like a transient space. They swapped all the overhead lighting in the apartment with decorative pendant lamps (with the help of YouTube tutorials on how to do so), and hid away unsightly closets in the living room where they keep their winter clothing with long velvet drapes from IKEA. From there, all they had to do was curate the things they already had.

In the kitchen, they decided to hang up all food-related art, from prints to framed menus, while in the bedroom, Brettschneider pulled out the pieces she had that best matched her rug, even framing an old Guggenheim Museum brochure to make the gallery wall more cohesive. But nowhere is her curatorial eye more apparent than on the IKEA Svalnäs shelf she bought just for this apartment.

“I had so many little things that were scattered around my old apartment, and I never felt like they had a place,” she says. Since she and Albury are both collector types, they wanted a spot to not just stash their ceramics, books, and artwork, but to show them off. She started with the books and then gradually layered in other objects, trying to maintain an even balance on each level. “It went quicker than I thought it would—it was just an evening of arranging,” she says. “Though I feel like I’ll be adjusting it forever.”

While it took less than a month to make their new-to-them apartment feel like home, Brettschneider and Albury hardly feel like they rushed through the process—and they know they have plenty of time to tweak and experiment as they please. “Because we’re working from home, we’re here all the time,” she says.“I’m always staring at what can be done.”