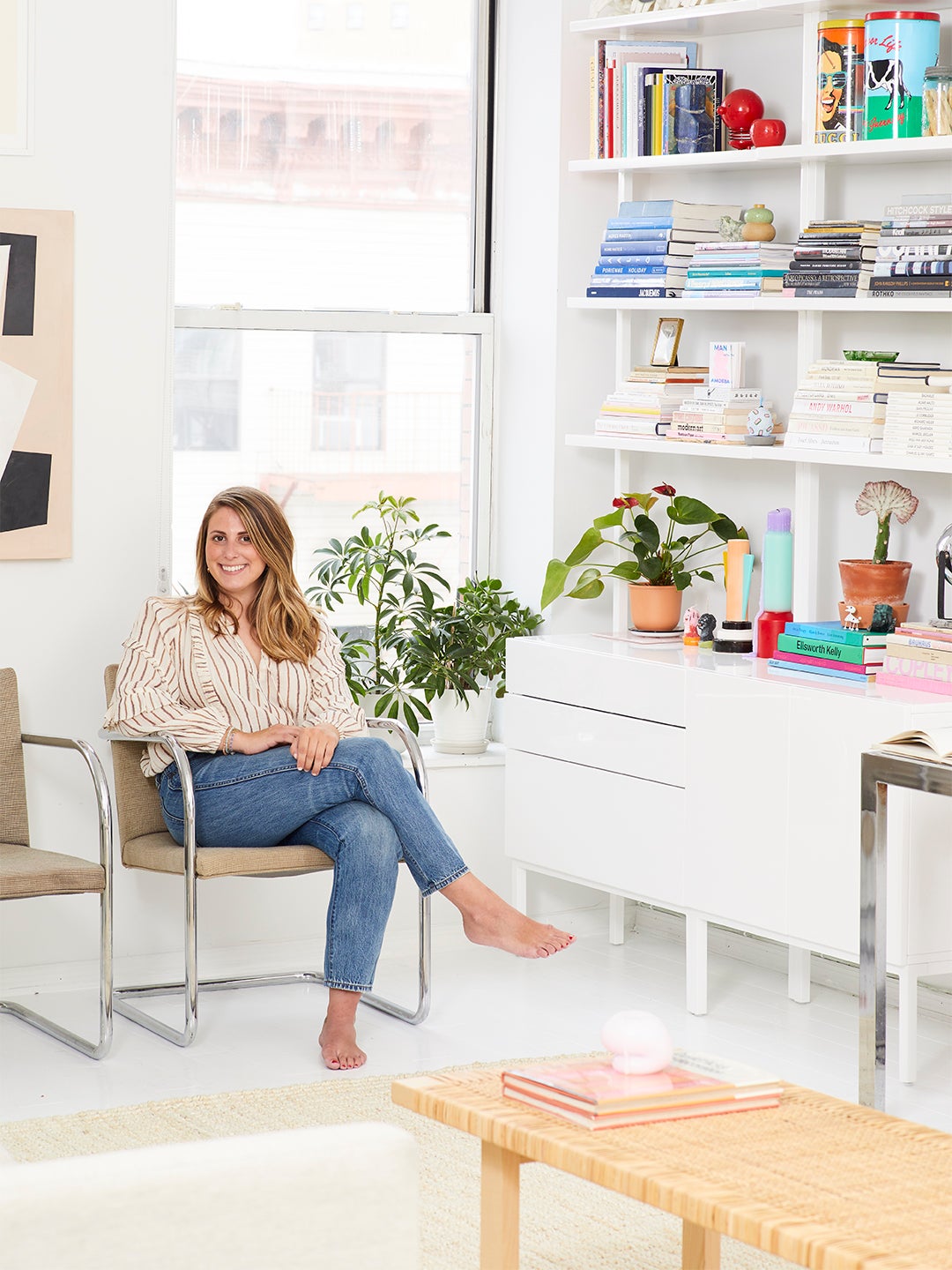 Like most good things in New York City, designer Jen Levy found her new apartment completely by chance. One afternoon, she was over at a friend’s place when someone knocked on the door. The neighbors were moving out and leaving a fiddle leaf fig behind. Levy was considering not renewing her current lease—and their unit had yet to be signed for. “I called the landlord and secured it within an hour,” she says.

It was a blank slate, an open studio measuring 600 square feet. According to Levy, there were only three major problems: The lack of storage, a dingy bathroom, and the tiny kitchen. But there was also one big bonus: The Bushwick building is filled with artists, even the landlord himself, who is very trusting with renter-lead renovations.

Levy used her unique set of skills—she’s a former visual merchandiser in the corporate fashion world, current designer of private homes, retail shops, and pop-up spaces for the likes of Pop Up Grocer, Shopbop, and more—to transform the space with budget-friendly DIYs. Here’s how she pulled it off in waves.

Other units in the building had white-painted floors, so she knew that the upgrade was fair game. Luckily, her old and new lease overlapped by a month, so she spent that time prepping the new place.

“I love a very clean minimal backdrop, then layering in color and texture and things that really make the space personal,” she says. “So if you got rid of all my books and art and everything, the apartment would just be white.”

To get a clean slate, Levy went for a durable high gloss paint. Her square footage required three gallons of the inexpensive “porch and floor” product, totaling at around $80. She promises that painting a floor sounds more intimidating than it is—all you have to do is pour directly onto the boards and go at it with a roller, finishing the edges with a brush as you would your walls. Two thick coats should do the trick. As you might expect, white floors show a lot of dirt and wear, which Levy uses as incentive to keep them extra clean (though she has no strict “shoes off” rules for visitors). Touching up the space is rather low drama—she moves all her furniture to one side of the apartment and paints half, lets dry, then flips and does the other.

Upgrading the bathroom before move-in was another must. To make the space feel bright and clean, she had the sad gray tiles professionally glazed white, which is fancy talk for adding a layer of porcelain-type paint. Because of the paint’s fumes, it needed to be completed while the unit was vacant, and it was also one of Levy’s bigger splurges, totaling at almost $1,000.

Levy knew she would have to create her own storage. After researching various options, she decided to invest in three Ikea Pax units that she customized in-store with a professional—an exercise she highly recommends over going it alone online. They fit perfectly along the wall between her bedroom and kitchen. Her only other organizing advice: Invest in clear shoe boxes (hers are $1 from Amazon!) to help avoid piles.

Other easy improvements—such as changing the handles on her kitchen cabinets and having light fixtures installed—also made the space feel instantly customized. Plants function as mini room dividers, accentuating the different areas of her open studio. A lot of furniture carried over from her previous apartment, including almost all of the living room and bedroom finds, some swaps made unhurried over time.. “I’m a collector of things,” Levy says, which shows in the objects and decor she’s amassed, an even mix of vintage, new, and collected.

The kitchen was a true labor of love. Levy made three key changes to the small space—her top priority was to make it feel larger. She did this by literally expanding the footprint, adding a floating Ikea island complete with bar stools from Brooklyn-based vintage shop Bi-Rite. The white stools were getting lost against the island, though, so a DIY paint project—the most challenging of them all—began.

The first step was to sand the smooth, composite laminate material to create texture. Next came a coat of primer to make the surface sticky. Levy used a roller to add paint, but wasn’t in love with the outcome. So she started back at square one, committing to a fresh color and entirely new application process, which included purchasing a paint sprayer (the least expensive one on the market for $89) and another trip to The Home Depot for Behr’s Pink Sea Salt paint. To protect her mostly white apartment from overspray, Levy devised a booth of sorts with coverings hanging from the ceiling. “I was so worried my whole apartment was going to be pink, but it actually was a lot less scary than I thought it would be,” she says.

Lower-lift DIY upgrades include a peel-and-stick backsplash and a faucet swap. The former totaled around $120 and Levy insists it’s easier than it looks. “I think anybody can do it—and the great thing about it is that if you mess it up, you can just take it right off and start over,” she says. Simply measure the wall you want to cover, multiplying the length times width to figure out square footage. Levy ordered her tiles from Amazon, which arrived in sheets of 12×12 inches, just like a big sticker. She advises to start in a corner and work your way over, trimming with scissors as necessary. The trickiest part, according to Levy, was getting the tiles under and around her hood—she used a ruler to press down where her fingers couldn’t fit. A black grout pen helped create contrast between the all-white tiles (she tested it first on some leftovers).

As for the faucet? She replaced the previous standard stainless steel design with an affordable black matte find. “I bought it and I think it sat in the box in my apartment for three days, because I was definitely going to hire a plumber to install it. Then I just opened the box and read the directions,” she says laughing. “I went, ‘This is easy! I can figure this out.’”

The best part: Almost all of it all be taken with her when she moves. “I think I’m done, which is a really good feeling. It took me almost 8 months,” she says. “I love how open it is, I love how bright it is, and I love the white floors.”