What Happens When the World’s Top Designers Style a Cruise Ship? Take a Look

See inside “the ship of the future.” 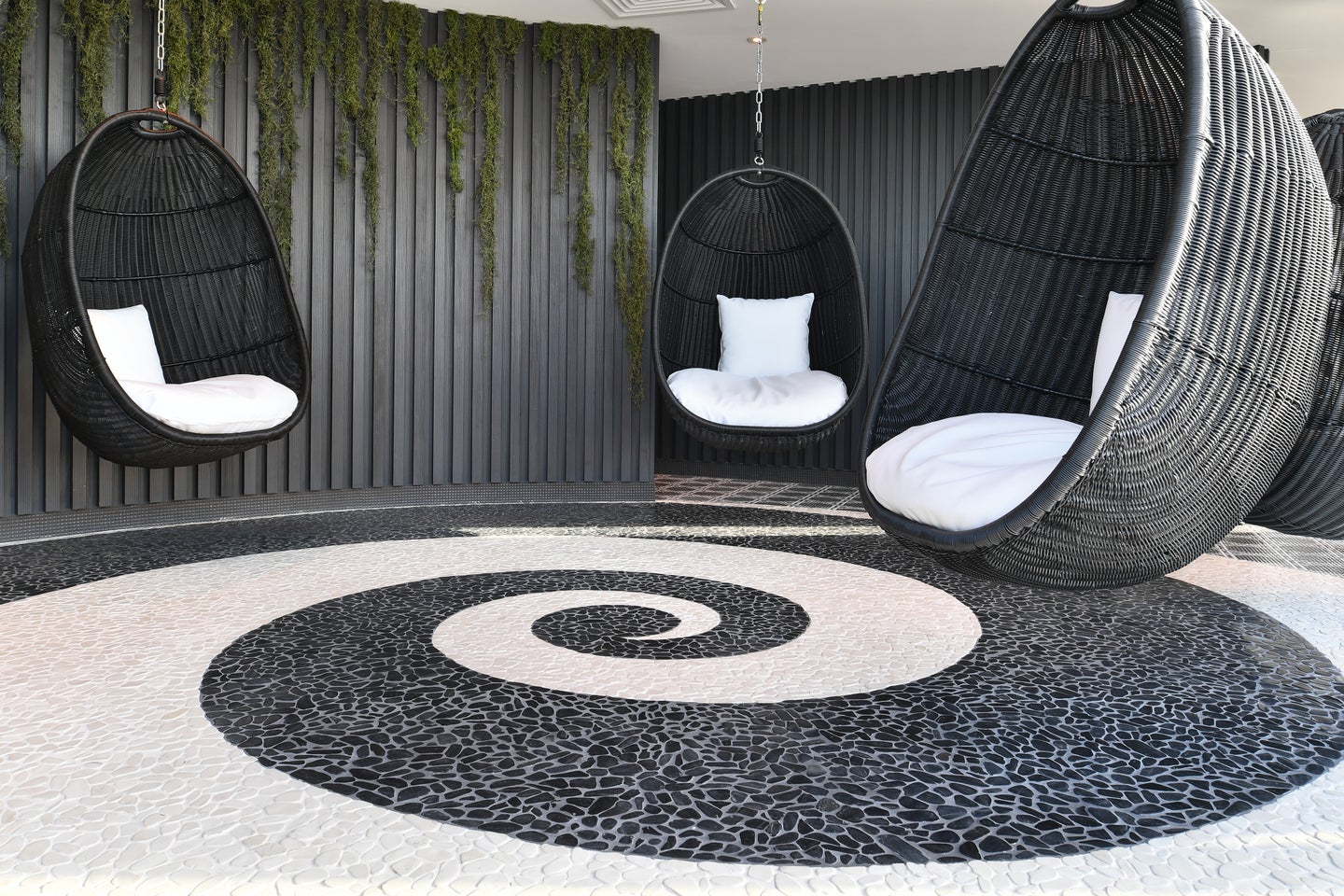 When you think of a cruise ship, you probably don’t imagine a space that is a pinnacle of high design. Perhaps your visions are closer to the 1987 classic Overboard, minus the iconic Goldie Hawn costumes. Admittedly, the idea of being placed upon a giant ship with 3000 strangers over international waters for days or weeks can be panic-inducing. Yet one ship, in particular, is hoping to convince you otherwise, with a rock star–level list of interior designers. Considered first of its kind in the industry for design, eco-friendly initiatives, and ingenuity—say hi to The Edge, Celebrity Cruises’ newest large-scale ship called The Ship of the Future.

Think of the who’s who in the design industry—one of those names probably helped design The Edge. For example, Spanish-raised, Milan-based Designer of the Decade Patricia Urquiola designed the ship’s multifunctional entertainment space known as Eden. The designer is heralded for her cleverness and playful yet individual point of view with each diverse project. And even her furniture can be seen throughout the space, albeit lovingly redesigned with materials to age well, considering the potential numbers of guests interacting with them.

If Urquiola wasn’t impressive enough on her own, consider passionate, Paris-based design duo Jouin Manku, who lent their intuitive wonderment to the large-scale center point of the ship, the Grand Plaza. The duo, made up of Patrick Jouin and Sanjit Manku, are known for their individual approach, usually taking on an impressive restraint and customizing designs according to the personality and origins of each project. The monumental chandelier that takes up the Grand Plaza space, in collaboration with L’Observatoire International, becomes the showcase filled with joie de vivre, almost the beating heart of the ship. The chandelier comes alive at various points throughout the day, putting on a hypnotic show rivaling the infamous Bellagio fountains.

Yet, if Urquiola or Manku wasn’t enough to show you how unusual of a ship The Edge is, allow London-based, MBE-awarded designer Kelly Hoppen to do so. Her famous choices of muted color palettes and textured materials invoke a relaxed, calming, and luxurious vibe to the spa and all 1400-plus rooms. To access the 22,000-square-foot spa, you walk down a winding, whipped cream–esque dream of a staircase and meet a grandiose marble desk reminiscent of a sculptural masterpiece. “I’m all about texture, experience, harmony, and East meets West—and that’s what the spa is,” says Hoppen. Inside, you’ll find treatments rooms any spa lover would melt over—a crystalarium healing room, a marble- and mosaics-laden Hamman, a quartz crystal bed that molds to you during a therapeutic massage, a water-filled LED light therapy bed, a waterfall room, a halotherapy (salt healing) suite utilizing Himalayan sea salt, and floating chairs above a Japanese zen rock garden.

When it came to the rooms, cruise ships are traditionally known for feeling like you’re in a sardine can, which doesn’t exactly invite you to rest. For The Edge, Hoppen purposely designed the space to feel grander and cozier with a series of inventive, multipurpose design elements and a warm, muted color scheme. It helps that each room is 23 percent larger than average too. “I didn’t want it to be a commercial interior. I wanted it to feel like a luxurious home—albeit one floating in the middle of the ocean,” says Hoppen. And luxurious yet clever it is, with retractable tables, writing desks that fold into coffee tables, and vanity mirrors that stow away.

A floor-to-ceiling window to the ocean in each room doesn’t hurt either. If you’re lucky enough to be in a suite, you’ll even get a large-scale patio to step out on. Even in the standard room, the window, known as the “infinite veranda,” cleverly and elegantly opens halfway down at the touch of a button for a mock patio, bringing the ocean even closer to you.

We saw The Edge mid-creation in the south of France in 2018 in Saint-Nazaire, which is basically to ships what Grasse is for fragrances or what Jamón is for ham. It takes thousands of French engineers and shipmakers years to create a normal ship, but especially a ship at this level of detail. As Manku walked around the hard-hat ship, he passionately described all the thought processes behind nearly every design element he touched, visually described the grandness of all his elements that were soon to come to life. Actually, the duo’s take on a cruise ship is rather personal. Jouin’s grandparents worked at Chantiers de l’Atlantique, the very shipyard that built The Edge.

On its opening cruise, we asked the designers onboard what could have made them ever consider designing a ship and each one explained it in a way that zeroed back to one idea: complete artistic freedom, no limitations, and just the ability to just simply create. “The most exciting thing was the challenge to reproduce a land project in a ship. It is the first time for me approaching this kind of project, and like every new project, I discovered a new dimension and I learned a lot,” says Urquiola. “The truth is that I’m attracted to every possible attainment because experimenting also means making mistakes and trying again.”

“When you think of the cruise industry a million years ago, how incredibly luxurious and how it was such an amazing thing to do, and I think the world changed where everything had to be condensed and it was sort of fast-food design,” says Hoppen. “And now everything is accessible again, and honestly, there is no reason anyone in the world shouldn’t want to be on a cruise.”

Although the cruise industry is traditionally for an older audience, the medium age of cruisers is slowly aging down, and Millennials are hopping on the trend. And as Hoppen describes it, what’s not to like? “It’s like being in a hotel. It could be in Ibiza, St. Tropez, Milan, New York—it doesn’t matter—we’ve created this international interior,” says Hoppen. “And you’ve got a choice of where you’ll eat, what room you’ll sleep in—that’s the beauty of being on a cruise—you have the ability to choose where you want to go and be who you want to be.”