If This Is What a Modern Versailles Bathroom Looks Like, We’re In 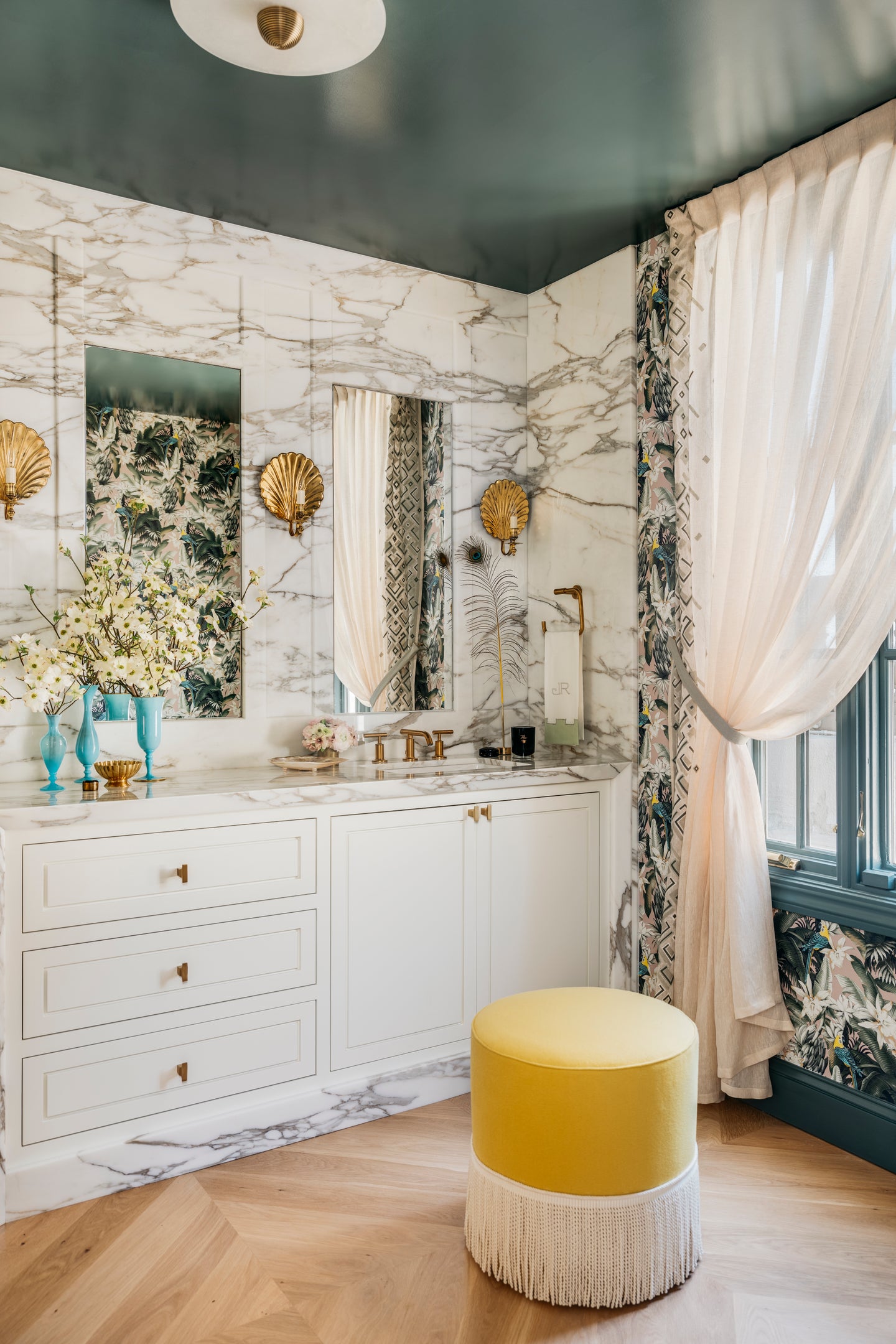 The annual San Francisco Decorator Showcase is a whirlwind of “what ifs?” What if the designers had no one to answer to but themselves? What if the ceiling was really a garden? What if every bed had its own swing? The result is always a home that’s full of surprises. This year, Julie Rootes’s guest bathroom was cause for astonishment.

Dubbed Le Petit Trianon, after the original château at the Versaille Palace in France, the 18,000-square-foot Presidio Heights mansion that served as the backdrop for this year’s showcase was a natural source for inspiration for the Bay Area designer, who will take any chance she can get to wander the streets of Paris. “I have a real affinity for French culture, French design, and French history, so the house definitely resonated with me,” says Rootes. “When you travel to Paris and go into these hotels, like Hôtel de Crillon, they have all these spectacular details. I’m always mesmerized by them.”

Having less room to work with than the majority of her fellow designers, Rootes decided to take an architectural approach to the space, filling in the gaps with fringe embellishments and tropical prints. Read on for four bathroom design lessons we’re taking away from her Parisian-inspired paradise.

Choose Stone That Lends Itself to Details

You don’t have to ask Rootes twice: Marble was a given from the very beginning. “I didn’t want to do your typical tile with grout lines that break up the space,” shares the designer. “I really wanted to highlight it with stone elements.” Like a subway tile, Rootes knew a simple slab countertop or waterfall edge would be too simple for the vanity. Instead, she encased the entire piece in Calacatta Borghini marble and took the material into the enclosed shower.

“Marble right now is clearly a big element in kitchens and in bathrooms, but if you take it one step further, it can really be more of an artistic element in your space,” she says. Look a little closer and you’ll notice the beveled-edge details around the mirrors. Rootes even had the slabs of marble book-matched so the veins of the stone appear to run in a clean and continuous manner.

Yes, Wallpaper Can Be Both Timeless and Fun

The parrot-themed wallpaper that covers half the room wasn’t just inspired by Paris; Rootes discovered it in January at a Pierre Frey preview. The treatment was the perfect mix of old and new. “I felt like it was a nice juxtaposition to the stone. It has a playfulness to it, but you can’t tell if it’s brand-new or from one of its archives,” she explains.

The tropical scene, unknowingly, established an aesthetic of land and water. The bluish green paint color used on the ceiling is bound to transport any onlooker to the edge of the Seine.

Be Playful With Your Lighting

Who would have ever thought seashell sconces and a Rosie Li palm leaf floor lamp could peacefully coexist in the same room? Outside the window, a lush garden of greenery awaits. Rootes used the view as an opportunity to bring the outdoors in.

“That fan palm against that wallpaper just felt like a natural selection,” says Rootes. Her other lighting pick—softly scalloped seashell sconces from Soane Britain—added to the romance without detracting from the real star. “I knew they weren’t going to overpower the stone. I love how they just cradle in against those insets,” she says of the artful addition.

There’s little we love more than full-on tile in the bathroom, but even we have to admit there’s something magical about getting out of the shower and stepping onto a patterned hardwood floor. “People worry about getting it wet, but you’re not bathing on it. It’s okay!” affirms Rootes, noting any scratches can be buffed out and any stain can be made beautiful again. “I think you have to keep up with the style and the architecture of the home, which is what I tried to do—that old-world feeling but in a fresh way.”

See more stories like this:  6 Details We’re Stealing From Garance Doré’s Breezy California Bathroom 5 Luxurious Outdoor Showers That Give Bathtubs a Run for Their Money This Kids’ Bathroom Is So Chic That Even Adults Will Be Jealous