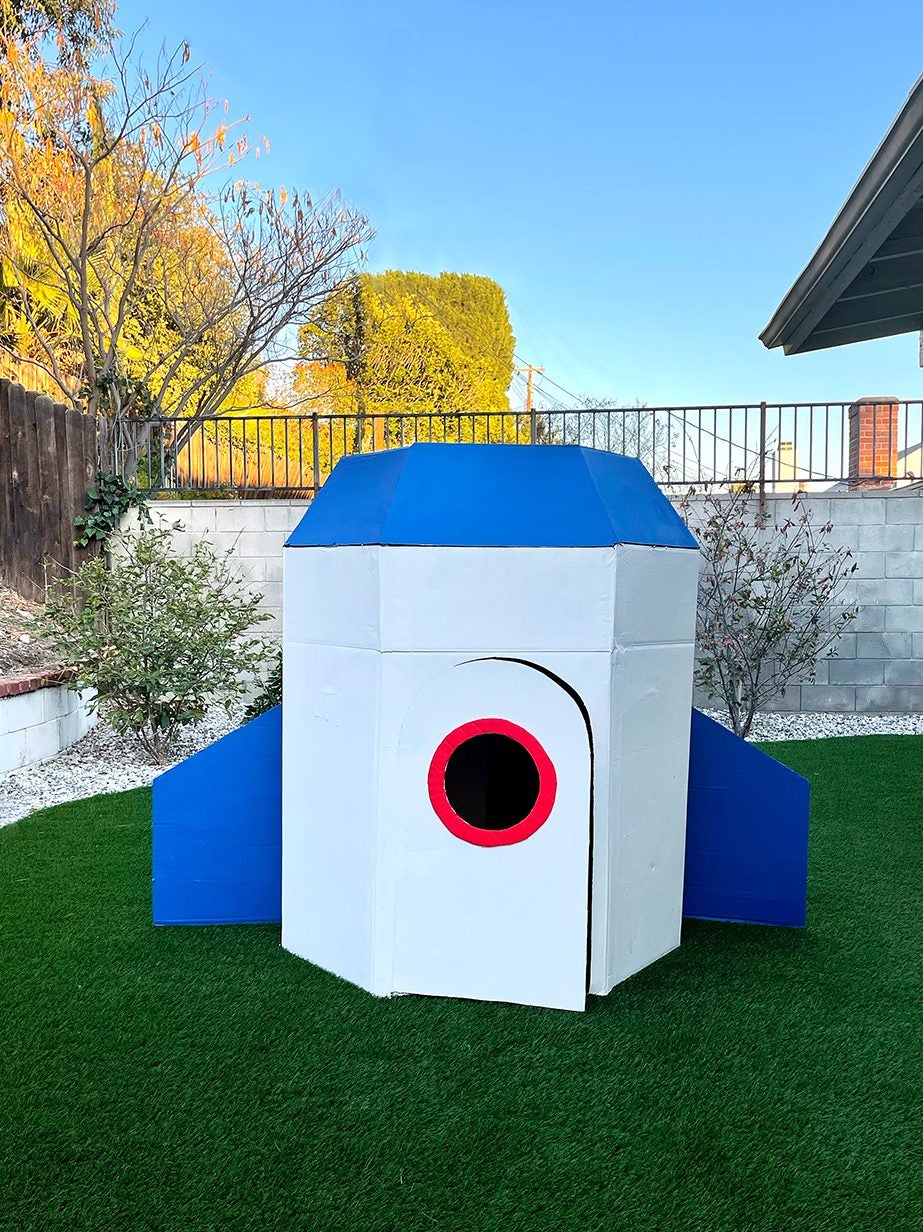 Los Angeles–based visual artist Mary Lai has not one but two muses: her daughter, Rylie (4), and son, Niko (3). Her most popular work to date is an alphabet series in which each letter represents a famous artist (think: P for Picasso, F for Frida [Kahlo]), and the idea all stemmed from Rylie practicing her letters. “People loved it,” she says, noting she also has a series called Fashion LeGogh, an homage to fashion icons designed as Lego-like characters. “I felt like I became the artist who was getting inspiration from her children.” The trio doesn’t just collaborate on art, though. At home they stay busy with larger-than-life crafts, like an interactive rocket ship made out of cardboard.

The project was a happy accident. When the family of four had grown out of their two-bedroom place in Hollywood at the end of 2020, they moved to the Valley, where they could spread out. “We finally had a backyard, so the kids were excited,” says Lai. Before even settling in, she got the idea to build a fort out of all the broken-down moving boxes. “It was a great way to reuse them and not just throw them out,” she adds. A few ideas were floated around in the brainstorming phase—mini house? dinosaur?—but everyone voted: They wanted to go to the moon.

Lai found that sturdy corrugated wardrobe boxes worked best for creating the body of the rocket. The tall rectangular sides were positioned in an octagonal shape, held together by water-activated Kraft tape. “That made it very seamless,” she explains. The adhesive is not only cardboard colored (so it blends in), but its matte texture absorbs paint well, unlike the typical glossy varieties. Then two wings made from smaller boxes were attached to the structure.

Lai’s engineer husband, Jerry, stepped in to design the roof, which is the most complicated section—essentially made out of eight individual panels that meet over the center of the ship (the flaps are held together with more tape, plus an interior “beam” that’s really just a cardboard roll).

To access the ship, Lai added an arched door. Rather than just paint on a fake window, she made a real one by cutting out a circle from the panel and adding a hole in the center, wrapped in red gaffer tape for a pop of color that doesn’t fade.

The painting part went fast, thanks to Lai’s little helpers. “My kids love it because they see me do it all the time, but when they get involved, I know it means a mess, so we laid down a big plastic tarp first,” she explains. They made use of blue, white, and red quarts she had on hand and covered the wings, roof, and body—one coat each.

When everything dried, Rylie and Nico prepared for takeoff. Well, really, they just hung out in there with their blankets and dressed up the interior with doodles and stickers (we love the idea of glow-in-the-dark stars!). “They treated it like it was their little house,” says Lai, who even crawled inside once or twice herself.

Because the family chose to keep the ship outside, it only lasted around two weeks before they decided it was time to toss it (the weather had taken its toll on the cardboard). But that’s not to say anyone with a spacious playroom couldn’t make it last much longer inside. “There are so many things you can create with these boxes,” says the artist. “If we do it again, I’ll maybe do two smaller ones so they could each have their own.” We have liftoff.