A learning tool before her kids can use the real thing. 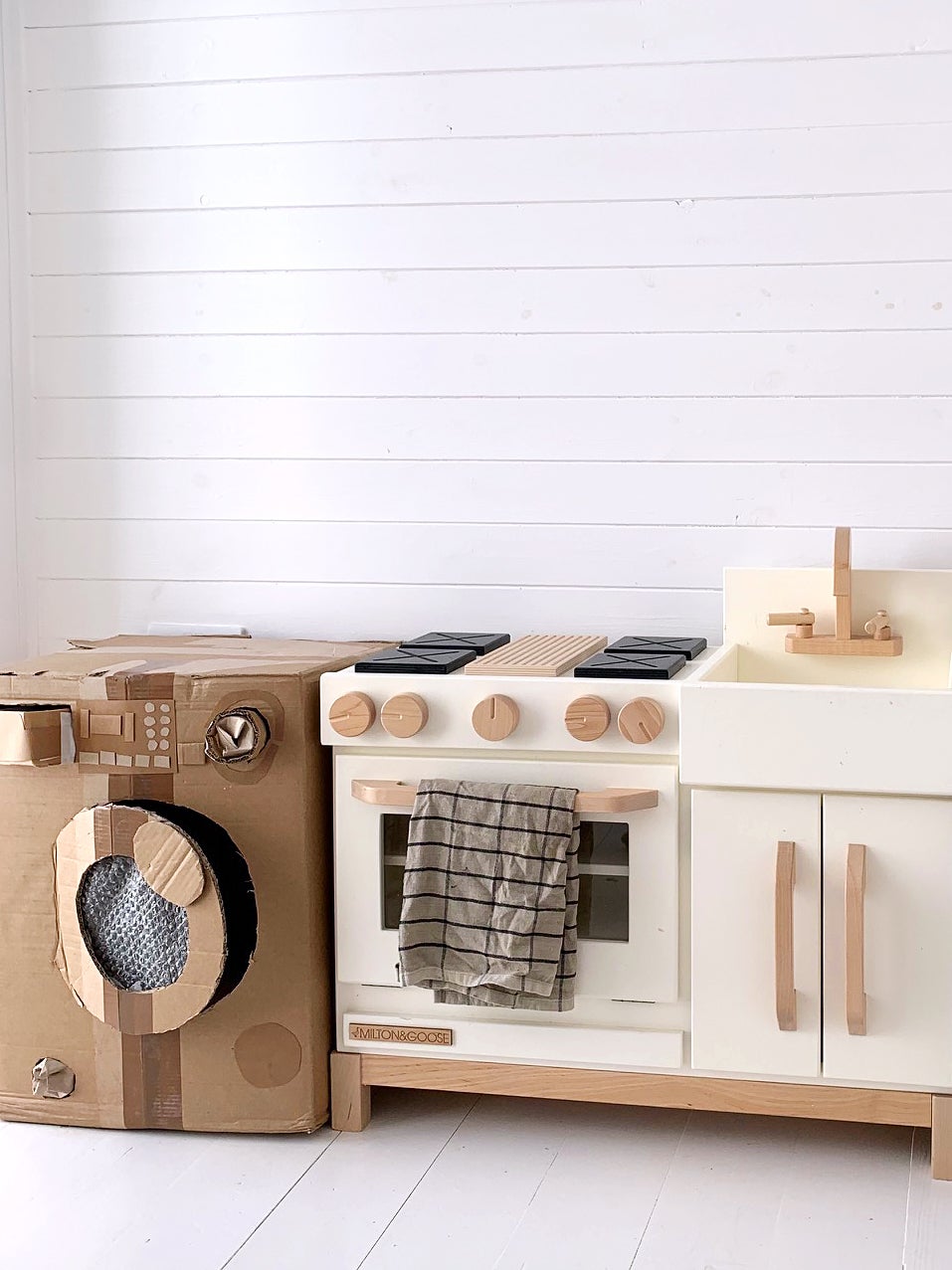 Sydney Piercey started building objects out of cardboard during quarantine to bring her neighbors joy. “I would make little things for their two young boys and leave them on the doorstep,” she says. “They thought I was really cool.” Eventually, Piercey’s oldest daughter caught on and requested some toys for herself. The London-based mom of two (Lily is two-and-a-half, Willow is seven-months) quickly realized that building a pretend washing machine or ironing board was a great way to teach her little ones how to use the real versions of those household items safely. Not to mention, “it’s become addictive,” says Piercey of piecing together each item. She designs the objects to have the same exact features as the actual products in her house, that way Lily can mimic her parents when they’re doing chores. “We kind of copy each other,” she says of the learning process.

Piercey goes above and beyond with her creations, decking them out with rotating knobs, tiny storage compartments, and sliding shelves—and for good reason. “I want Lily to be entertained for at least half an hour,” she says. The designs are impressive but totally doable: She has yet to try something that didn’t work. Plus, constructing toys out of materials that would otherwise end up in the recycling bin feels good. “Being a mom has made me much more eco-aware,” she says. Ahead, Piercey walks us through one of her latest projects and shares four more ideas to add to the playroom. One day, her daughters will be master crafters themselves (and kept busy by making their own creations).

Step 1: Find Your Base

For this craft, Piercey started with a large Amazon Prime box that was roughly the same size as her actual toaster. She decided to make a four-slice tool so it looked like the one in her kitchen and Lily could follow along, but you could easily tweak it to make a two-slice version.

Time to tap your inner engineer. To make the part that actually “pops” the toast, Piercey cut four paper towel tubes in half longways and then rolled them back up so they were slightly tighter. Then she secured the four rolls to a flat piece of cardboard using eco-friendly, reusable masking tape. (Note: There’s no gluing involved.)

Piercey cut a slot in the side of the box for the lever (which is really just a toilet paper roll). To ensure that the thing functions like an actual toaster, she added bits of cardboard scraps to the other ends of the paper towel tubes so they would be a bit heavier. Then she deconstructed the box and put everything neatly inside. Before taping the container back together, she used an X-Acto knife to cut slits for the slices of bread. “I find it’s easier to cut it when it’s flat,” she says.

Piercey doesn’t forget even the smallest features. Just below the lever, there’s a small tray to catch the hypothetical crumbs. She cut out little circles to create the knobs and made them spin by attaching them to the box with two-pronged split pins. All that’s missing is a faux butter dish.

You Can Also Try…

To prevent her little ones from playing around with her brand-new SLR camera, Piercey made a cardboard version that has a removable lens caps and cover, a rotating aperture dial, and a detachable neck strap. She laid out all the parts on the coffee table, including Bubble Wrap (the fake photos for Lily to process) and twine and clothespins, so she can hang up her snapshots.

This exact replica of Piercey’s machine comes with a little detergent drawer and tons of buttons for the settings that can be rotated, so Lily will graduate into a laundry pro in no time.

Piercey sliced up paper towel tubes to make the needle for her cardboard record player, adding a counterweight to the end (just more cardboard) so that it swivels like the real thing. That way, Lily can practice the delicate art of adding and removing the needle, and her Dad’s vinyl collection stays unscratched.

Every play kitchen set needs a dishwasher. Piercey’s version features sliding racks, a cutlery container, and sturdy slots that can hold melamine bowls. “This doubles as a gift for my husband, Stuart,” says Piercey. “He’s given up trying to get me not to stack my plates up in the sink, but he may have more luck with the little one.”