The hands-on project gave the boys “a real sense of ownership.” 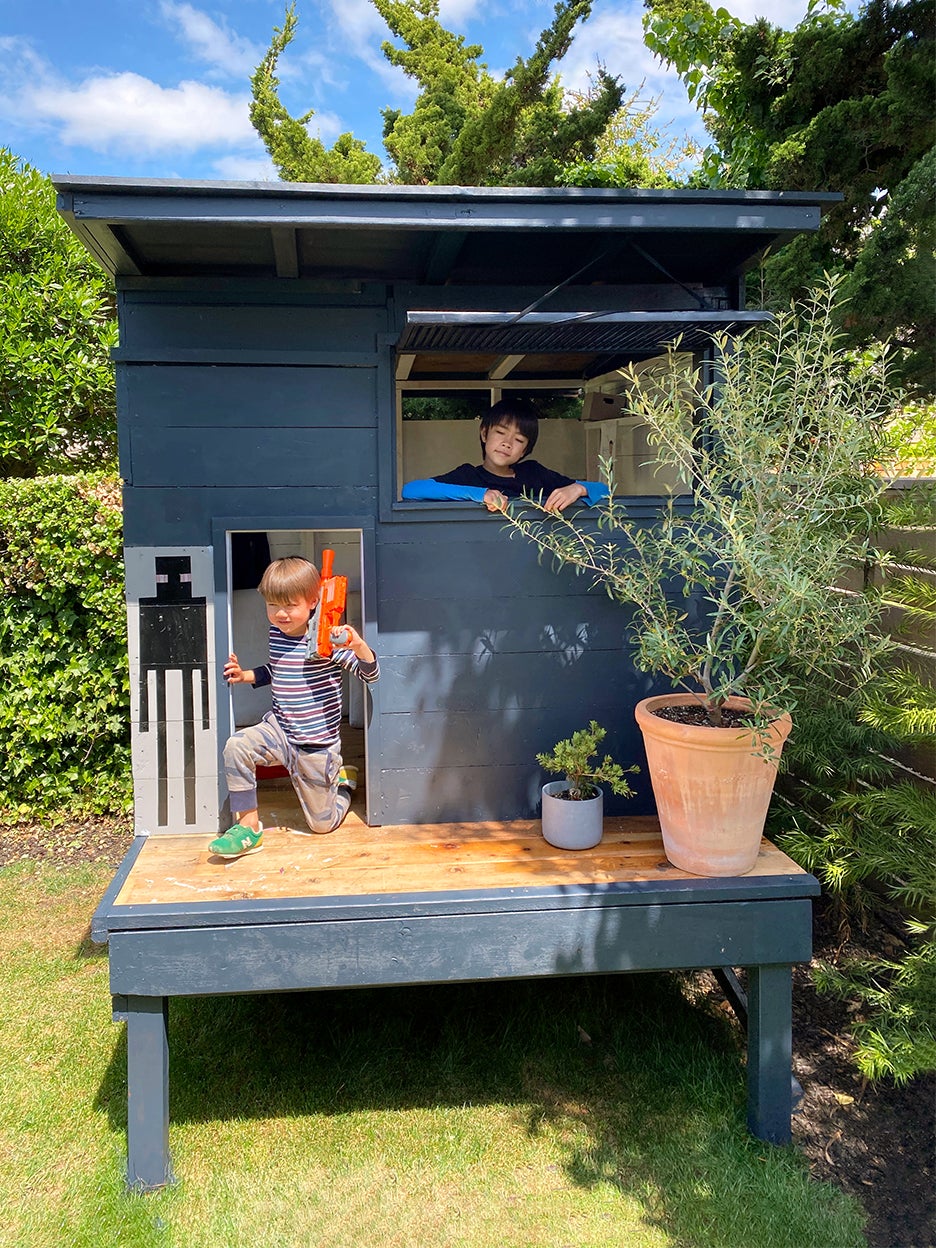 Instead of sourdough starters and crochet projects, Felix, age 8, dealt with the onset of quarantine by building forts. Trying to bring his vision to life with fluffy pillows and billowing sheets didn’t always create the structures he was hoping for. So his dad, Randy Engler, a builder himself (“Of both companies and physical things,” Engler says with a laugh), decided to step in and lend a helping hand. What resulted was not just a very cool backyard fort but an opportunity for several teachable moments—the power of hard work and collaboration, the satisfaction of making something, and the creativity of using found materials. The best part? The project became a chance for Felix and his 5-year-old brother, Oliver, to bond with their dad through a shared goal.

To start, Engler asked Felix to draw out his ideas, which they then went over together, with Engler offering some guidance and tweaks. After creating a final sketch, the trio got to work.

Luckily, Engler and his wife had recently completed a few renovations of their own, including painting the bathroom and carving out a living space for his in-laws in what was once the home’s garage. With leftover materials from both projects ready to be put to good use, Engler discovered his own learning moment: “Using repurposed materials teaches the boys that you don’t have to always buy new; you can use what you have around you.”

With the help of his sons, Engler measured out the space in the corner of the backyard where the fort would live, then sized the wood from the in-law unit. Because Engler had envisioned an elevated structure as a better fit for Felix and Oliver’s preferred activities of jumping, hiding, and climbing, the first weekend build (out of four) was spent constructing the platform. Engler and his mini assistants used four pinewood posts cut at 2-and-a-half feet high to form the base, and, because of earthquake concerns in their hometown, added three cross pieces so it would be extra-strong and secure.

Next, the Englers tackled the fort’s framing. Most of the leftover wood reserve was made up of bigger pieces, which meant that this part of the project required purchasing materials, specifically 20 pieces of wood 2-by-4s, which were cut into various sizes before the boys drilled them into place with Engler’s guidance. Once that was ready, they turned to the siding. Engler’s pine boards didn’t have a uniform length, but all were within the 5- to 10-inch-long range. “If you don’t have copious amounts of spare wood sitting around, you can use simple plywood sheets instead of precut boards,” he notes.

Given the fort’s permanent place in the family’s yard, Engler wanted a more modern look, so they went with a slanted roof. The plywood sheets were cut to overhang about 4 inches on all sides of the structure (other than the front deck, where the overhang is about 2 feet to create some shade and protection). Rather than shingles, Engler used roofing tape to cover the seams and prevent water from leaking in.

By the final weekend, it was time to add the finishing touches. “Since my wife’s parents live across from the fort, we wanted it to be something they could look at every day,” explains Engler. The structure’s exterior got a lick of leftover Benjamin Moore Evening Sky paint (after the boys approved the color, of course), a new hatched window for proper air flow, planters, string lights…and voilà!

When it came to kitting out the inside, Engler let the boys go wild. “I told them, ‘This is your space; do what you want in here.’” After weeks of working hard to make their vision a reality, he says that allowing his sons to define their own place “gave them a real sense of ownership—it’s not me and Mom dictating anything, it’s all theirs.”

Perhaps the best part of the project came at the end, when, as a surprise for his Minecraft-obsessed sons, Engler stenciled a character from the video game series on the outside, using painter’s tape and spray paint—officially marking it as Felix and Oliver’s home away from home. For other families embarking on their own DIY project, Engler has one piece of advice: “The whole point was to do it with the kids. So keep them involved in the process. And frankly, just watching my boys do it was really fun.”

These days, Felix and Oliver spend a ton of time in their fort, taking quiet time to read or draw, engaging in Nerf battles, and even begging to spend the night inside (although Engler isn’t convinced they’d last more than 20 minutes). But with a space to call their own, anything is possible.