How One Cool Dad Built the Ultimate Backyard Playground for $1K

A follower of his has already copied it. 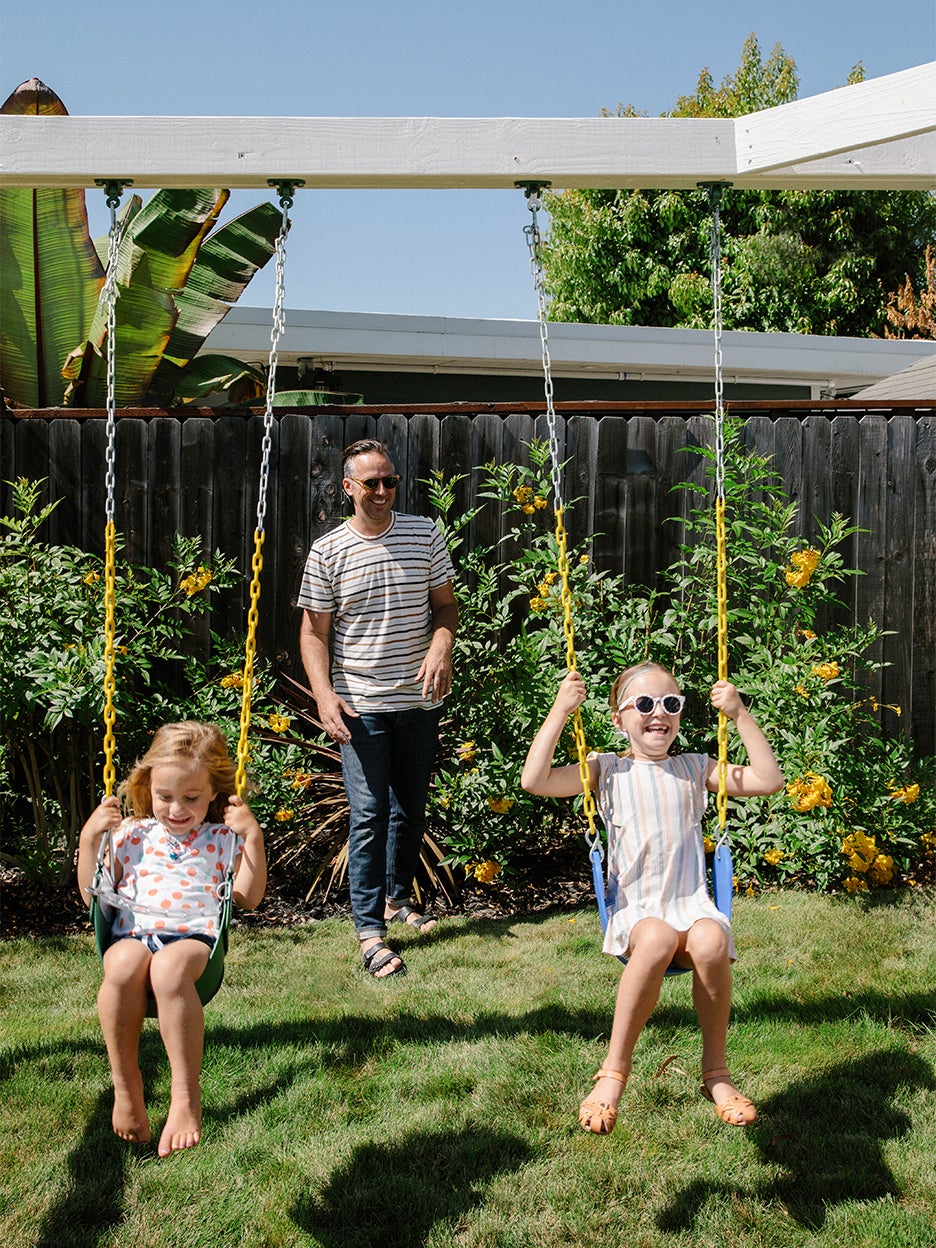 Last summer, furniture designer and Amigo Modern founder Eric Trine and his family barely spent any time in their backyard in Long Beach, California. Mainly because they were too busy traveling, but partly because the quarter-acre lot needed some serious landscaping. This year it’s a different story. On Friday, March 13, the day that Trine learned that his two daughters, 6-year-old Evie and 3-year-old Ginny, wouldn’t be returning to school, he immediately texted his wife, Heather. “Just to be clear, I’m spending the whole weekend finishing the play structure,” he wrote. With many parks closing amid the lockdown, time was of the essence.

When the family of four bought their home nearly two years ago, the outdoor space had been a dumping ground for construction materials. “I guess the last owner loved the idea of taking on home projects but never doing them,” says Trine. After spending nearly $19,000 demolishing the old fencing and getting rid of the various piles of bricks, he laid down a fresh plot of grass—a prime spot for the jungle gym of his kids’ dreams.

But not any ordinary swing set would do (the ones Trine was looking at from big-box retailers were in the $2,500 range). “Buying one from a store doesn’t mean it’s necessarily going to be easier to put together or more durable,” he explains. “What it means is that there’s one way to do it, and if you do it wrong, it’s going to be a problem.” Instead, he built a chic set from scratch for $1,000 within the span of three weekends (roughly 20 hours total), sourcing whatever materials he could from Lowe’s and Amazon. The layout of the structure is so straightforward to follow that one of Trine’s Instagram followers has already copied it, tweaking things slightly to make it his own. “That’s exactly what the Internet is for,” says the designer. “To share and inspire, and to do simple things.”

Rather than go with pricey redwood or cedar for the parts, Trine bought cheap Douglas fir, but took extra care in painting, priming, and sealing the pieces (three coats of Dunne-Edwards’s exterior gloss each!) before assembling them. “If I wasn’t going to spend money on the expensive materials, I needed to put in the time to make them weather- and splinterproof,” he says.

Because he was tackling the project totally on his own, Trine made minimal cuts with his chop saw (the upright parts are made out of 8-foot-long 4-by-4s and the cross braces are made of 12-foot-long 2-by-6s). When he did need a helping hand during the assembly, he used quick clamps to temporarily hold them in place.

A slide was, understandably, a nonnegotiable for Trine’s daughters. Monkey bars were also a must-have—oh, and swings. “Those were the things I needed to hit,” he recalls. Figuring out a logical layout where no one would be running into each other or getting kicked was actually fairly easy (things are either 8 feet or 12 feet apart). The yellow slide was a secondhand find on Craigslist ($50), and most of the other accessories (the colorful swings, the rope ladder, the monkey bars) came from various retailers on Amazon. “I just typed in playground and went from there,” he says.

The whole structure is made to grow with the girls as they get older, so the various attachments can be swapped out (the swings can be exchanged for a trapeze set, for example). Trine is currently pondering building a climbing wall, at the request of his nephews. They can even hang an adult-size hammock or a slackline in between the posts.

The pink teeter-totter hanging around is something Trine welded at his studio a few years back. “I actually gave it to a friend, and about two months ago I was like, ‘Hey, can I get that back?’” he recalls, laughing.

To safely secure the wood pieces, Trine poured small concrete footings using Quikrete (around $5 per bag). There’s no cement mixer necessary: You just put the stuff in a bucket, mix it with a shovel and water, and pour it in a small hole in the ground. Trine notes that he was able to get away with lighter footings because all the crossbars help brace the structure.

Even though Trine is skilled in the art of furniture making (you can snag his pieces at West Elm, as well as other boutique retailers across the U.S.), he points out that no one taught him how to do this type of construction—he just learned along the way and read the instructions closely. “Our yard is a gift right now,” he says. “Just going out there and pushing the kids on the swings in between emails or when I’m stressed has been the best break.”