Hands Down: The 15 Best Blue Paint Colors for Kitchen Cabinets 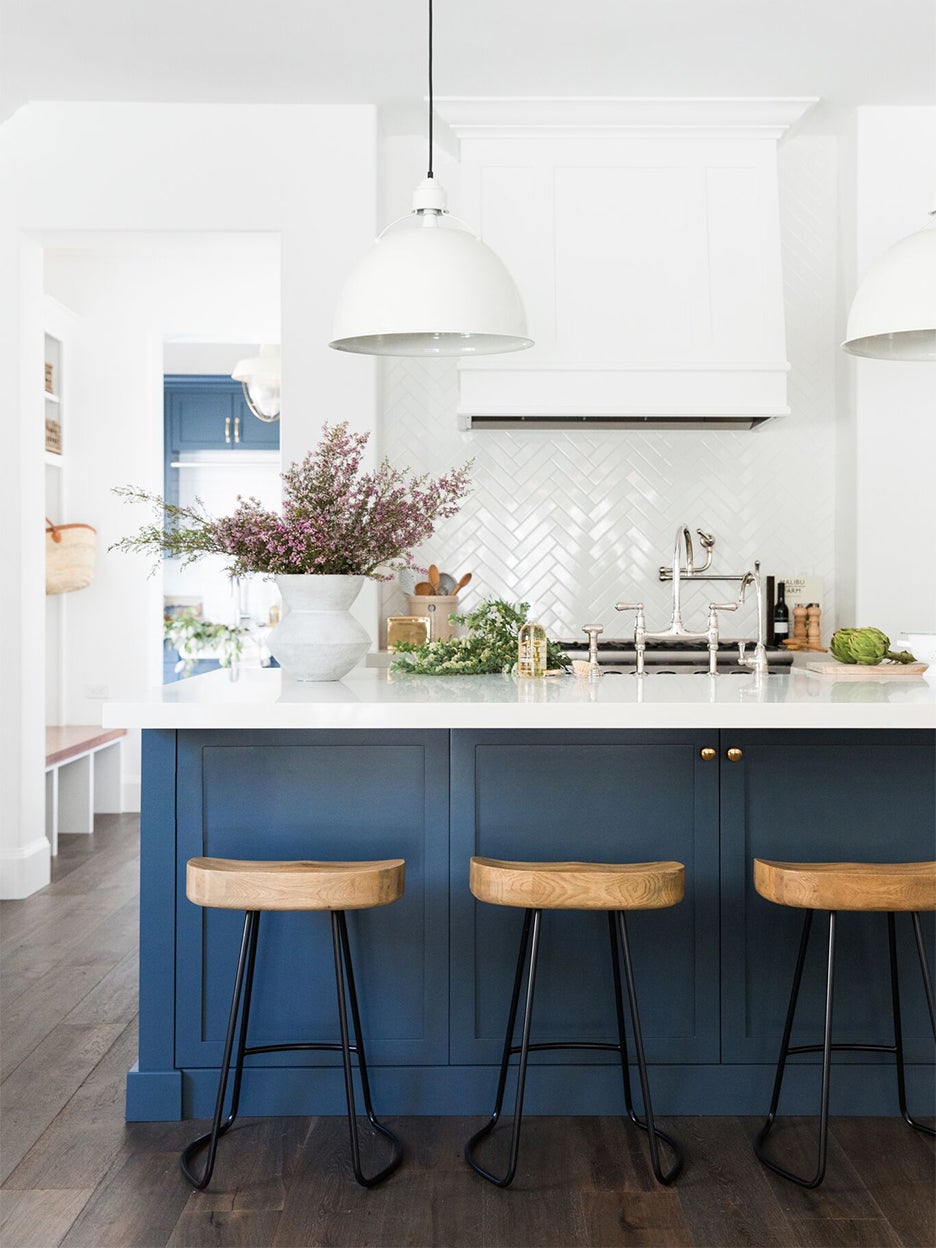 Bold enough to fulfill your cravings for color, but easy enough to live in your house forever, blue kitchens are staking their claim. But are you really surprised? Blue paint colors have been trending in a big way for the past year. And while we’ve seen the hue take shape in saturated bedrooms and pattern-forward dining areas, the color lends itself particularly well to the heart of the home.

From matte sapphire to midnight, we’ve seen just about every shade work wonders for kitchens. So how do you know which swatch is right for you? We asked the owners and designers behind 15 of our favorite blue kitchen cabinets to find out. Read on for the exact paint colors to try for the same looks.

The Turquoise: Soft Turquoise by Behr

In artist Abel Macias’s Los Angeles home, the kitchen is painted a vibrant turquoise to match the original 1920s linoleum floor. “We couldn’t change the tiles, so we decided to fully embrace it,” he told us.

The Powder Blue: The Early Stuff by Backdrop

To contrast the brown kitchen tile in this Folkstone, England, Airbnb, Sophie Rowell of Cote de Folk painted the lower cabinets (and adjacent banquette) in a soft pale blue. The color combo, inspired by a Wes Anderson–esque lighthouse, also brightens up the windowless space.

In Julia Rouzaud’s French kitchen, a complete gut reno, a rich gray-blue coats the cabinetry. Paired with a burnt terracotta hood and rosewood hardware, the shade appears more like cornflower in person.

Designer Elizabeth Stamos saved close to $30,000 on her kitchen remodel by keeping her existing Shaker-style cherrywood cabinets and simply painting the fronts in this sophisticated shade. She added trim to the top of the cupboards for a bespoke look.

The saturated navy blue island in this Studio McGee–designed space acts as a centering force in the almost-completely-white room. The subway tile and crisp white uppers have so much more character thanks to the statement moment.

Classic and modern all at once, the dreamy matte shade that Tiffany Grant-Riley chose for her Edwardian house in Kent, England, was a fitting choice for the historic space (the home is more than a century old). After dousing the cupboards in the color, she painted the wall next to them so it reads like one unit.

Calling all white kitchen devotees: Consider this seamless London kitchen by Jordan Cluroe and Russell Whitehead of 2LG Studio the ultimate case for embracing subtle color. Given the pale blue hue’s vintage vibes, the pair took a contemporary approach to the cabinetry by opting for cutouts over hardware. “We had cherrywood put in the backs of the finger-pull handles on the drawers to reference the original cherrywood doors throughout the apartment,” says Whitehead. “The warmth of the cherrywood works beautifully with the cool blue.”

The Barely There Blue: Kentucky Haze by Benjamin Moore

Inspired by the pale gray hues of the U.S. coastline and the earth tones of the Southwestern desert, this soft, neutral blue effortlessly marries the colors of the American landscape. It seems only fitting that the shade found a place in Kim West’s Austin home. In true camouflage form, the inset appliances blend right into the picturesque background.

In this coastal Maine home, designed by Heidi Lachapelle Interiors, a maritime blue rounds out the waterfront views beyond. While the subtly aged and not-too-nautical choice was largely inspired by a large oil painting that sits in the same space, this color stands on its own.

It’s easy to see why Hague Blue has become one of the most popular swatches for the kitchen and beyond: This color is incredibly versatile. In a serene San Francisco home by Saffron and Poe, the striking shade takes on a Mediterranean point of view against a graphic, tiled backsplash.

Formal, tailored, and totally classic, Gentleman’s Gray is the blue swatch equivalent of a wise British man in a top hat. That said, the hue’s sophistication lends itself particularly well to edgy and contemporary designs. Just take this unexpected kitchen by Black Lacquer Design. Juxtaposed with a rich slab of black marble, the matte color feels decidedly fresh.

The Feels-Like-Vacation Blue: In the Tropics by Benjamin Moore

Reminiscent of turquoise waters in the Caribbean, one can almost feel the warm ocean breeze in Edith Young’s New York City kitchen. Given its sultry tones, Young used the swatch cleverly, honing in on a smaller space so that its luxurious color could have major visual impact.

Tending toward traditional, this balanced hue can go coastal cool or inland sophisticate, depending on the materials, fixtures, and other design details you incorporate into the space. In the case of this beachside retreat in Marina Del Rey, Stefani Stein invoked the laid-back aesthetic of a California rancher by matching the color with a quartzite countertop, farmhouse sink, and oak floors.

Australian designer Sibella Court’s free spirit shines in her Sydney kitchen, where a “subtle but stormy palette” reigns supreme. The moody, sea-inspired indigo shade she chose for the island and cabinets picks up on the relaxed yet eclectic vibe and serves as an anchor for the humble materials used throughout her home, like zinc, brass, rope, leather, and cane.

When Homepolish designer Barbie Palomino and her husband, Jason, were renovating their 100-year-old Los Angeles home, she wanted green and he wanted blue. Cue the perfect compromise. A Carrara quartz countertop sets the scene for a fresh and clean space, while the bluish green cabinet color gives the room the playful feel it was looking for.