These Vegan Bakers Will Make You Rethink Your Wedding Cake 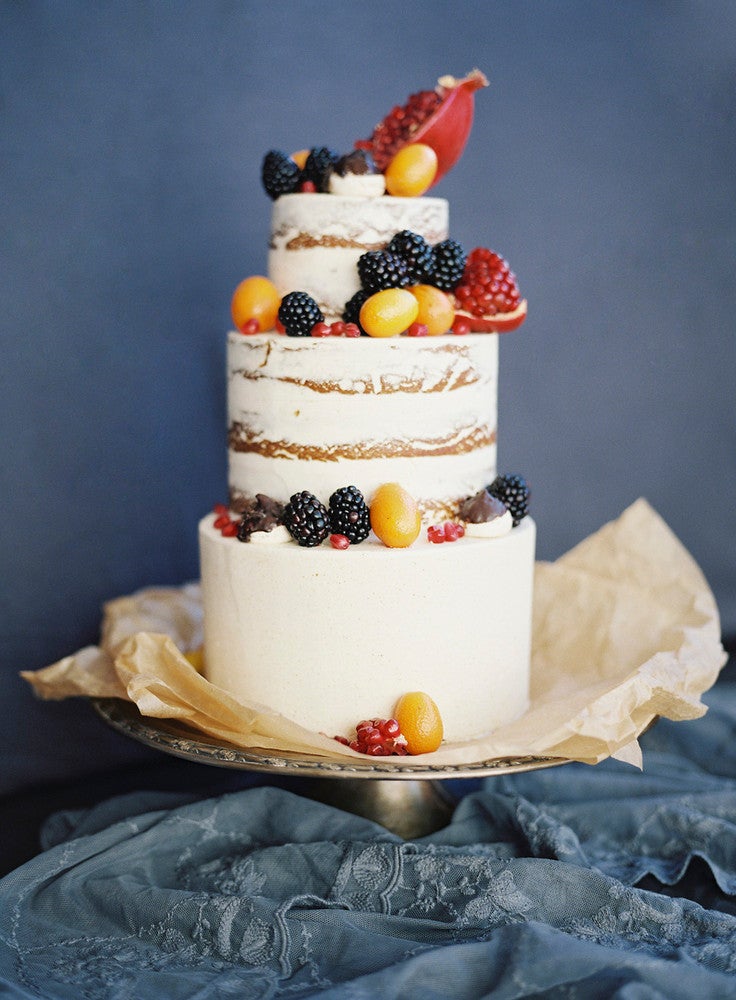 Gone are the days of tiered vanilla wedding cakes with white frosting for all—weddings are more individualized and personalized than ever, and the desserts that celebrate these occasions are no exception. A decade or so ago, the idea of serving a

would likely draw some serious side eye.

But thanks to the creative genius and hard work of numerous vegan bakers, couples can now happily and proudly serve gorgeous and delicious vegan wedding desserts that rival traditional versions in appearance, taste, texture, and irresistibility. We’re highlighting three innovators who have taken the vegan baking scene by a storm, and who revel in the challenges and hard work that come with using alternative ingredients. Despite their varied styles, the bakers share similar insight on what makes a successful wedding cake: flavors that make you happy, alongside a dessert bar that can satisfy an array of tastes.

Aumiller, who recently released Pure Artistry: Extraordinary Vegan and Gluten-Free Cakes, told us that her own allergies forced her to rethink the typical baking process and create her own recipes from scratch. The result? Delicate, moist cakes in traditional flavors, as well as exotic ones such as black chocolate mango and matcha. Says Aumiller, “Our work is delicious because of our ingredients—not in spite of our ingredients.”

Aumiller’s artistry and versatility in creating designs both timeless and modern comes through in every step of the creative and baking process—from making custom sketches for clients and sugar sculpting to including elements from a couple’s personal love story into the final cake design. (One favorite example was incorporating a magical flower from the Shakespearean play A Midsummer Night’s Dream into a cake decoration for a couple who met on the set of the play.) While such a fancifully decorated cake showcases Aumiller’s abilities, Lael Cakes has also become known for their open-layer, minimally frosted cakes, adorned with unfussy flower and fruit details.

Erin McKenna’s Bakery put gluten-free baked goods on the map in the most delicious and stylish way. With over 12 years of expertise and locations in New York, Los Angeles, and Disney Springs, Erin McKenna’s Bakery has become a coast-to-coast hit with a cult following. The bakery’s cupcakes and donuts are adored by those with gluten and allergy sensitivities, as well as by anyone who just wants to eat a damn delicious treat. Best-selling cookbook author and food columnist Mark Bittman has proclaimed, “Vegan or not, gluten-free or not, Erin McKenna’s donuts are the best I’ve tasted in 20 years.”

When this gluten-free OG got started in 2005, there was no bakery in the country like it. “We did a massive amount of legwork to make clean baking (which sounds so much better than allergy-free) less gag-inducing,” she says. Luckily for all of us, Erin McKenna and her baking crew experimented, persevered, and succeeded in creating concoctions free of many common allergens—such as soy, dairy, eggs, gluten, wheat, and refined sugar—that are also vegan and kosher.

Erin McKenna’s Bakery treats are the perfect choice for wedding couples or guests whose various diets and allergies mean they generally have to settle for licking their lips and staring longingly at traditional wedding desserts. Known for their pretty, classic decorations and having a variety of traditional and unconventionally-flavored offerings (strawberry eclairs with coconut cream, anyone?), Erin McKenna’s baked goods offer the ideal marriage between looking stylish and serving a diverse range of dietary needs.

At just 20 years old, vegan baker and cookbook author Clara Polito of Clara Cakes has nearly eight years of professional baking experience under her belt. This seasoned sweet maker’s playful, approachable wedding desserts are perfect for more casual, homegrown weddings, as well as everyday celebrations. By riffing on familiar and comforting desserts such as banana cream pie, s’mores bars, and cannoli—as well as by whipping up her own inventions like Butterfinger-flavored cake or her famous Inception cookie (which, for the uninitiated, is an Oreo-stuffed chocolate chip cookie)—Clara Cakes is a great option for couples who favor fun over fancy.

Not that there’s a reason to limit yourself to just one type of treat—Polito firmly believes that an assortment of goodies is the best way to keep wedding guests satisfied. She suggests supplementing a small layered cake (to be used for a traditional cake-cutting photo opp) with bars, cream pies, cupcakes, and cookies.

She also encourages couples to stray outside of the typical bakery box in terms of the flavors they would like to incorporate. “I love when a couple comes to me with a cake flavor I’ve never made! The most recent one was a Tres Leches cake. It was so fun developing a new recipe, and I loved how involved the couple was in testing out the experiments.”

While some bakeries want clients to stick to a fixed list of flavors, Clara Cakes revels in imaginative and creative culinary challenges: “If a couple said, ‘I love raspberries and cornbread,’ I’d have a blast making something according to that,” she says.

These Edgy Wedding Photos Take “I Do” to the Next Level 8 Ways To Make Your Wedding A Chic, Charitable Affair The Emerald Engagement Rings Non-Traditional Brides Will Love