Can You Spot the Swaps in This Drastic Vanity Before-and-After?

Hint: The countertop is the same. 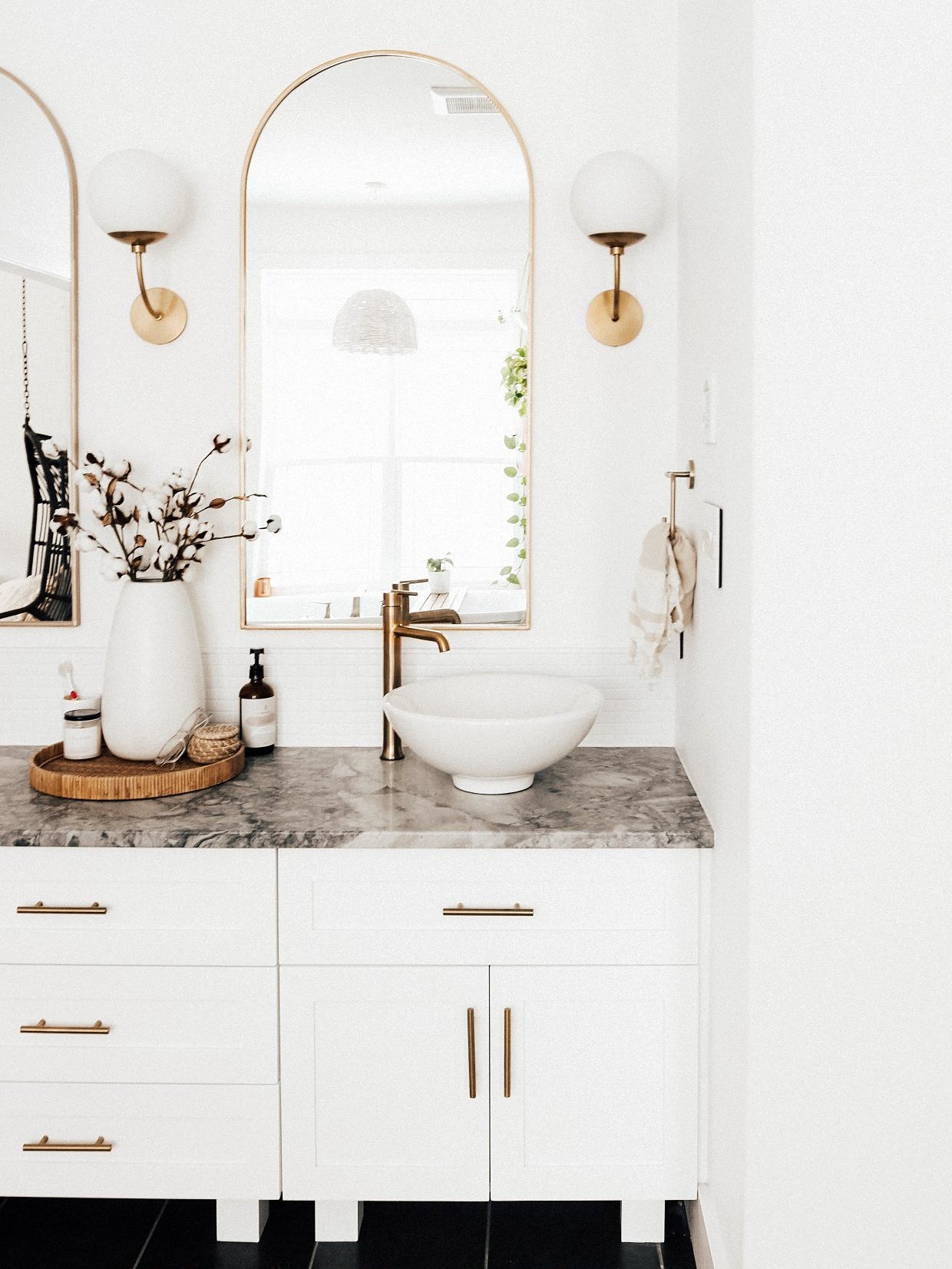 Amy Peters didn’t have an issue with the dark brown vanity in her master bathroom—the wood could easily be painted white. She also didn’t care that the countertops were a veiny gray granite, because they paired nicely with the slate stone floors. For her, the biggest eyesore was the giant sheet mirror. “I called it the ‘builder’s special,’” she says, laughing. The Canadian design blogger had lived with her dated, mid-2000s bathroom as is for two years. Then she stumbled across two curved mirrors in a discount furnishings store and everything changed. “They were the perfect arch,” she recalls. “As soon as I saw them, I was like, We’re doing it!”

Peters and her husband tackled a lot of the work themselves and relied on friends and family with construction know-how to lend a hand with some of the technical upgrades, like replacing the lighting and vessel sinks. All in all, the refresh was minimally invasive (read: budget friendly), mainly because she decided to keep the physical vanity. Her new motto: “Don’t wait for a rainy day. If you have the power to change it, do it.” Sometimes working with what you’ve got is enough. Peters spotlights the little changes that made a big impact, below.

Brighten Up the Walls and Cabinetry

When Peters and her family moved into their home two years ago, they had just about every surface in their house painted in Benjamin Moore’s Chantilly Lace, including the master bathroom walls and vanity. Around this time, they also installed brass globe wall sconces, which, along with the bright white paint color, instantly changed the mood. Still, there was plenty of work to be done this past December, when Peters decided to get rid of the mirror and upgrade the rest of the finishes.

When the sheet of glass did eventually come down, a friend helped out with patching up the drywall and applying the first two layers of plaster. Peters took the rest of the touching up from there (a first for her). “I underestimated drywall. I thought I could fill all the itty-bitty holes and sand it down so it was super-smooth, but it was really tricky,” she recalls. If you look closely at the surface, you can spot the imperfections, but Peters says it’s not an eyesore at all—it’s a reminder to try something new.

Replace the Mirrors With Something Sculptural

The arched mirrors Peters discovered at her local HomeSense store were all-around perfect, except for one little detail: The frames didn’t match the rest of the bronze fixtures she wanted to bring into the space. So she improvised with Krylon’s Dual Superbond paint and primer in Gold Metallic. To protect the glass, she covered the front with newspaper and taped it so only the edges were exposed. Next, she took the pieces outside and applied a few coats. She used a razor blade to scrape off any splatters on the glass.

To save a few dollars, Peters stuck with the existing backsplash (plus, she realized that if they removed the glass tiles, it might leave a gap between the drywall and the counter). So she got scrappy with paint once again and swathed the small squares in a product called Beyond Paint, which bonds to challenging surfaces—no primer necessary.

The directions say to let it dry for three to four hours, but Peters recommends letting it sit overnight. “I ran into problems when I attempted to do the second coat—the first layer started to peel off,” she says. You can still see the ripple it created, but, luckily, the backsplash is textured as it is, so the blemishes blend in.

The decision to switch the old transparent vessel sinks for white ones was twofold: Peters liked the look of the silhouette, but it also meant not having to adjust the holes for the plumbing. She special-ordered the champagne bronze faucets from Delta, but when it came to the basins, she picked up floor models from a local building supply center for around $80 each. A coordinating towel rack and tissue holder are little additions that give the (sort of) same space new life.

See more stories like this:  A Designer Added a Cozy Feature to This Mahogany Bathroom Vanity Who Says Your Bathrooms Have to Look the Same? You Can Now Buy a Bathroom-in-a-Box Designed by One Kings Lane