With some Superman style thrown in for good measure. 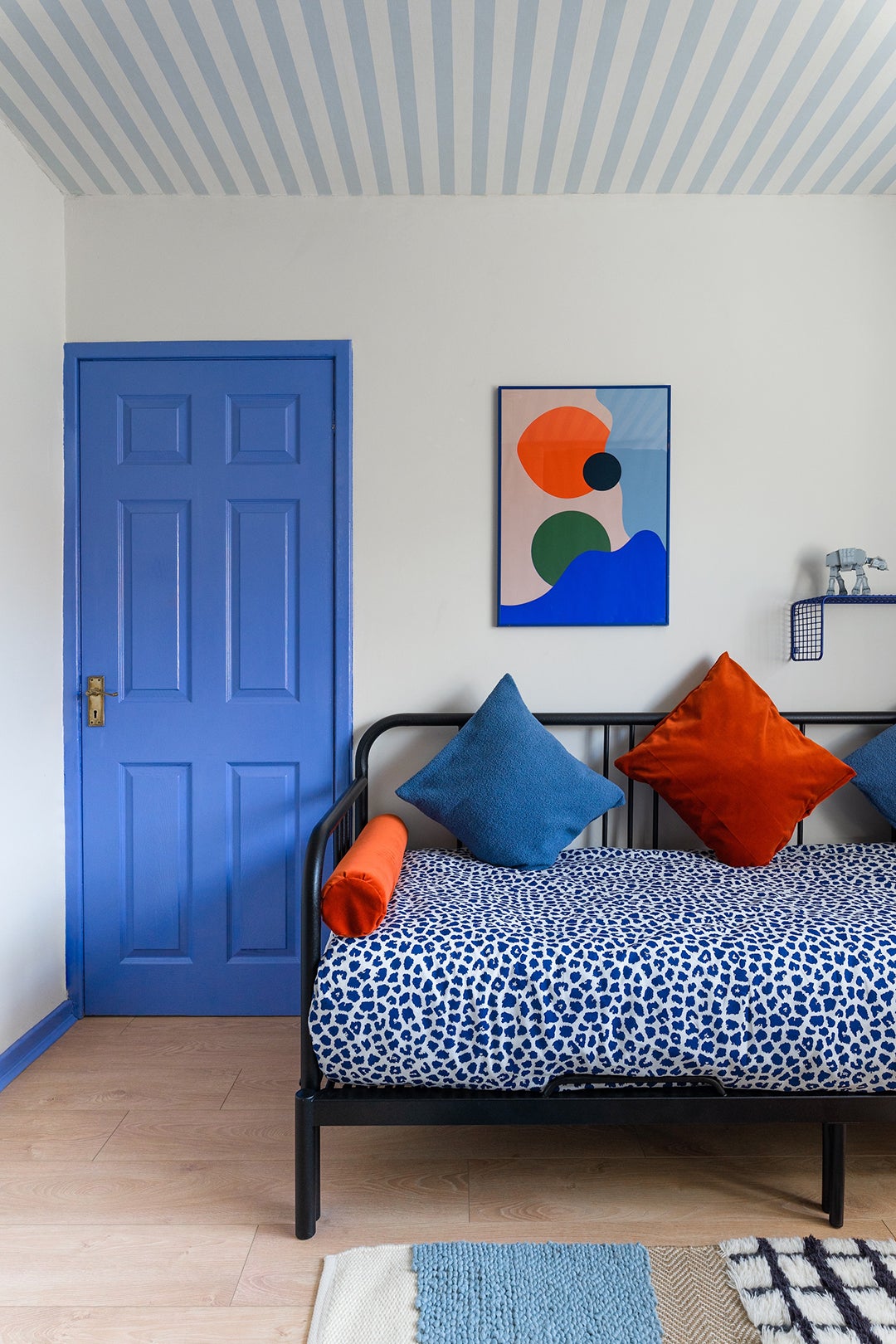 When Judith Achumba-Wöllenstein remembered that her then 9-year-old brother-in-law had a birthday coming up, the founder of Atelier Akuko did what any interior designer would do: She planned a bedroom makeover as a gift. For her, the renovation was a no-brainer. Harry was situated in what was originally his father’s office in the family’s home in Manchester, England, a small, dark room that only fit a raised bed and small dresser. It also lacked color and a functional furniture arrangement—hardly the kind of space a growing tween needs. Luckily for Harry, his sister-in-law has a master’s degree in the psychology of fashion, which gives her a solid understanding of color and how the human mind (including those belonging to 9-year-olds) interacts with various hues.

After a period of playing musical chairs with the rooms available in the home, it was decided that Harry would move into his parents’ previous bedroom, which had a larger footprint. Judith presented him with a mood board inspired by his interests (DC superheroes) and favorite colors (Superman blue and red, naturally, though she opted for muted shades of the primary colors). But rather than color-blocking, Judith focused on adding patterns to give the room some nuance while keeping it from skewing too young. She also ensured that the one room would have multiple designated areas within it. “A place to do homework, to read, and to do TikTok dances!” Judith specifies. Thankfully it was a low-stress presentation. “He was a really easy client,” she notes. With Harry and his parents fully on board, she was ready to get to work.

Then the pandemic arrived. Because they reside in London, Judith and her husband, Timothy, Harry’s brother, could only travel to Manchester to work on the bedroom whenever lockdowns eased up. What was originally meant as a gift for Harry’s 10th birthday became a present for his 11th. In between those visits, Harry and his parents took steps to prep the room as directed by Judith from afar, though not without moments of hesitation and raised eyebrows. To start, they removed peeling wallpaper and carpet. When it came time to take out the dominating built-in wardrobe, Judith reminisces, “I remember my father-in-law was like, ‘What are you doing? You’ve taken out this whole room and left me with a construction site!’” Before painting the baseboards and door the color Judith had picked out (Crowns Paint’s Periwinkle), Harry’s dad took a photo to get confirmation—“Are you sure this is the right color?”

Yet Judith kept to her original vision. Because the space was approximately only 9-by-8 feet, she relied on wallpaper and flooring to create optical illusions. “Having the wallpaper stripes on the ceiling makes the room look and feel wider than it is,” she shares. “I always try to make sure that whatever you see first when you walk into a room gets a lot of attention.” The vinyl flooring that replaced the carpet also reflects light and helps the space feel bigger; it’s much friendlier to Lego structures, too. A graphic, multi-pile rug brings texture back into the room.

Instead of a freestanding dresser that would take up valuable real estate, Judith installed a wall-mounted Boaxel system from IKEA to provide wardrobe and storage space. The showstopping red frame was another practical choice. “Because the wardrobe doesn’t have doors, all we needed to do was screw the MDF wood frame to the ceiling and to the side of the walls,” explains Judith. A black patterned curtain from an old IKEA collection, sourced from eBay, adds a dose of sophistication.

Building the wardrobe on the left side of the room allowed Judith to further accentuate the little alcove on the right, where Harry can study and play video games. Leftover wallpaper on the ceiling continues the stripe motif, and a custom desk and shelf punctuates the space with color.

On the other side, a trundle bed ticks off one of Harry’s requirements: “I need a lot of storage because I have a lot of different kinds of stuff,” he reveals. “I have a lot of Legos.”  (Fun fact: in addition to priming the room, Harry also styled it, creating a custom nameplate entirely from the bricks specifically for the shoot.) Above the bed, a spray-painted ledge, also from IKEA, acts as a side table–slash–bookshelf, flanked by a framed digital art download by Judith’s friend, artist Joey Miranda.

While she would normally opt for full-length curtains for the windows to make the room seem taller, Judith deduced that half-length shower curtains—another budget-friendly hack—worked better because the wardrobe drapes already offered a lengthening effect. After they swapped the original hooks with black metal ones, you’d never know the curtains were meant for the bathroom.

So how did Judith’s design match up to Harry’s expectations? When asked if there’s anything he would change, Harry beams with a shy smile. “Not really, to be honest,” he confesses. Harry isn’t the only one who is crazy about the space. “I love it to bits,” his mom declares. “When I have meetings, I go to his room, because it’s the best room in the house.”