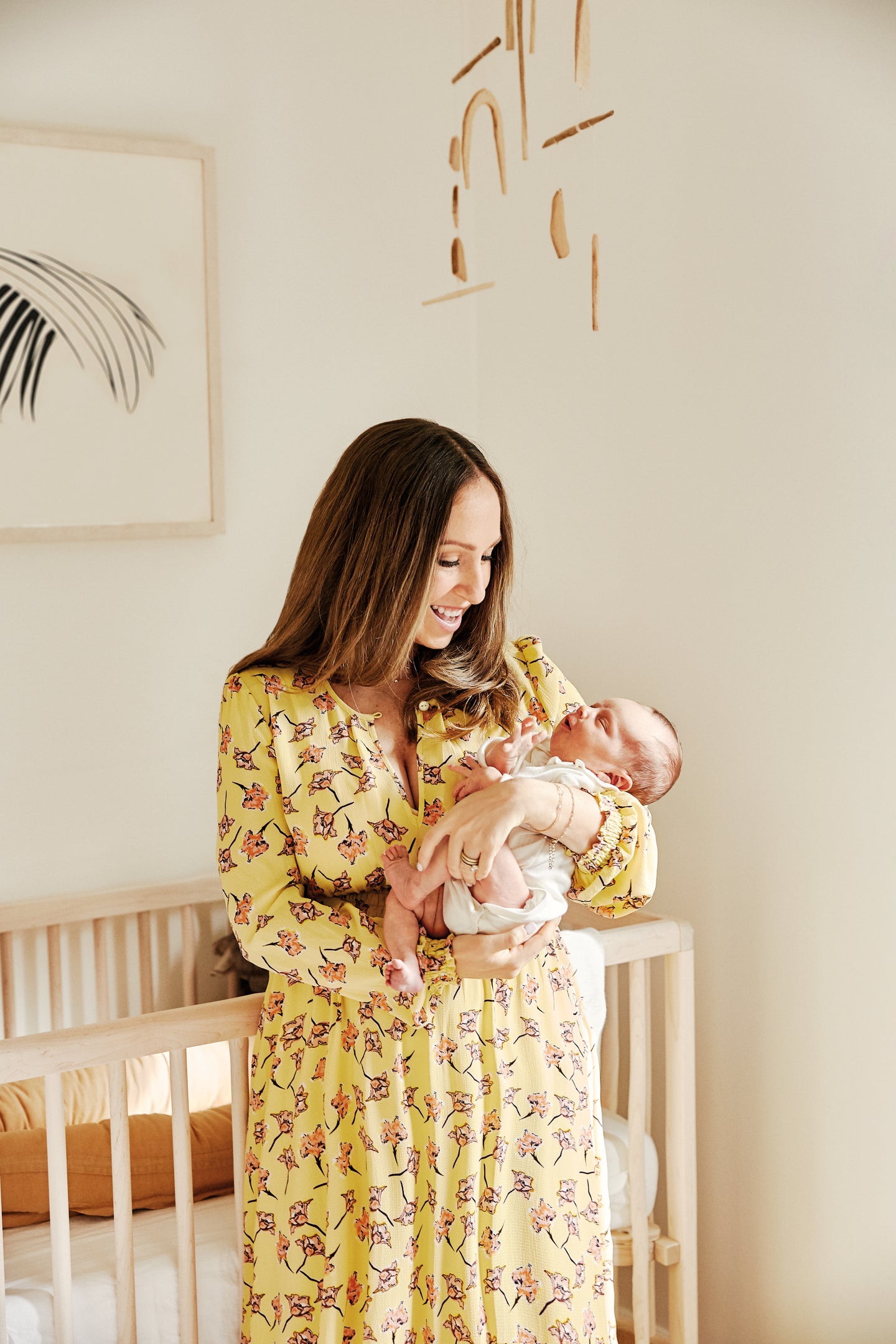 This story originally appeared in the Spring 2019 issue of Domino, titled “Beach Babe.” Subscribe to be the first to receive each issue.

Ariel Kaye has learned to thrive without a rule book. By age 29, the Southern California native had already checked “disrupt the bedding industry” off her to-do list. Now the CEO and founder of Parachute, the affordable startup–turned–successful home brand, faces a new breed of busyness: becoming a first-time mom in January to daughter Lou.

Luckily, nesting came easy for Kaye and her husband, Trevor Walsh, who had previously only ever shared their two-bedroom bungalow in LA’s Venice Beach with their dog, Lox. In tandem with interior designer Jess Diab, Kaye leaned on her established set of staples to create a coastal-cool nursery for her new addition. “Knowing that I was going to be spending a lot more time at home, it was important that the space represented who I am,” says Kaye. The wave print that hangs over the crib, titled Be in the Now, perfectly captures her mantra for motherhood. Here she shares four more ideas on making room for baby.

Invest in the Basics

When it came time to start designing the space, Kaye applied the same fuss-free ethos that has driven her brand: Focus first on the essentials. Core pieces were selected based on the potential to exist well outside of the nursery, including a crib that converts into a daybed and a discreet (and easily washable) rocker. “I’ve always believed your home doesn’t need to change, in terms of aesthetic, when a baby is born. It’s important to have that consistent and cohesive feel from room to room,” says Kaye, who filled in the gaps with mixed wood accents, layered linens, and woven lighting.

“I’ve always believed your home doesn’t need to change, in terms of aesthetic, when a baby is born.”

Develop Your Own Palette

In her search for zen, Kaye found comfort in neutrals reminiscent of the local landscape: earthy taupes, refined whites, soft grays—and plants to add pops of color. A breezy range of textures takes the place of rainbow clichés. “I live a few blocks from the beach, so I’ve always drawn from this natural aesthetic—definitely a laid-back California style,” she explains.

Led by—what else!—a craving, Kaye turned her yen for fruit during her pregnancy into a fanciful accent wall opposite the crib, where leafy greens weave in a subtle splash of color. The design decision marked another first: “I’ve never had wallpaper in any home or apartment that I’ve lived in, so I wanted something in the room that was a little more whimsical and fun,” she says.

“I’ve never had wallpaper in any home or apartment that I’ve lived in, so I wanted something in the room that was a little more whimsical and fun.”

Hack Your Way to Ideal Storage

Prior to becoming a nursery, the small room was the couple’s only guest bedroom. “We have minimal closet space, so my husband has used the guest closet as his own since we moved in. That’s something we aren’t changing,” shares Kaye. In lieu of a built-in closet, the pair searched for clever storage alternatives at their local IKEA, snagging a Pax wall unit (now finished with custom fronts by Semihandmade) and floating shelves with dowels, where mini outfits can be put on display. “Cute baby clothes are just as good as a piece of art,” adds Kaye.

Jenna Kutcher Talks Nursery Design and Finding Empowerment in Motherhood A Cool, Contemporary Nursery That’s Not Afraid of a Little Neon A Rainbow Nursery That Pinterest Dreams Are Made Of