What to Know Before You Visit Amazon’s New NYC Store

The best of the best, in one curated shop. 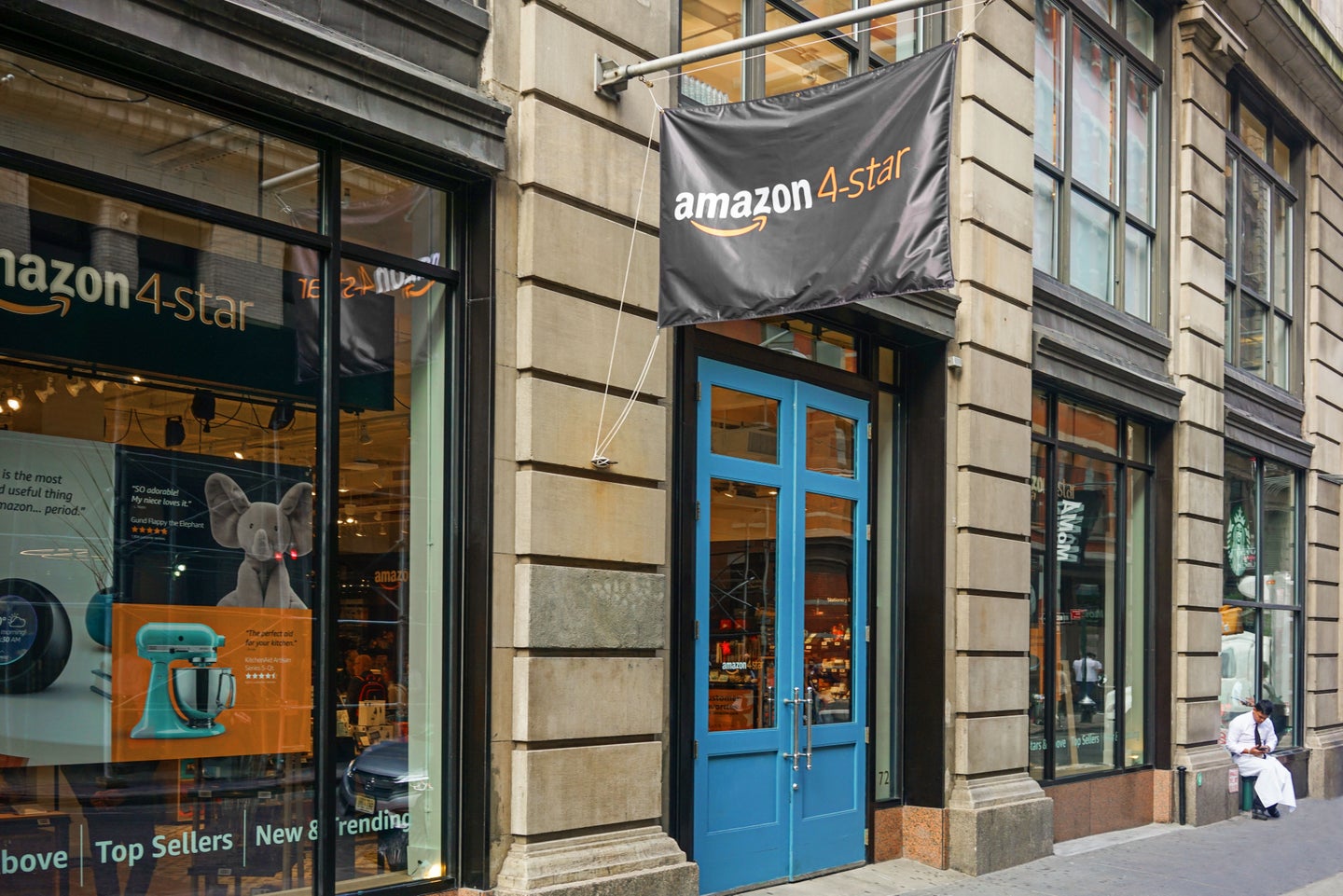 By now, Amazon’s takeover of almost every industry seems nearly inevitable. Its latest initiative is another foray into the world of brick-and-mortar retail; a venture the company started out last year by rolling out Amazon Bookstores and cashier-less convenience stores known as Amazon Go.

Amazon 4-Star, the retailer’s newest shop, is an entirely different story. It opened as a permanent storefront in New York City’s Soho neighborhood on September 27, and the best way to describe it is a physical manifestation of Amazon.com.

The basic premise behind the store and its offerings is that everything you see in there—with the exception of new/trending and top-selling products—has garnered an Amazon customer rating of four stars or above. Which sort of begs the question, why not five stars?

With about 1,800 items for sale and an average inventory rating of 4.4 stars (though it’s worth noting that, per Amazon’s blog, the products in the store have earned more than 1.8 million 5-star customer reviews combined), it’s quite the intriguing endeavor.

I went to the store to see what an Amazon IRL shop might look like—and turns out, I wasn’t the only one with questions. In fact, according to one very helpful cashier, the most common question she gets on a daily basis is “Why is Amazon opening a real store?”

Here’s what I learned.

Imitation is the highest form of flattery.

By which I mean, the layout of the store and labeling of different corners is directly pulled from Amazon.com. As soon as you walk in, you are faced with a “Most Wished-For on Amazon” section—which, in case you were wondering, includes a silicone baking mat from the AmazonBasics line, a Polaroid camera, and an Umbra hanging planter vase.

Similar to the scrolling banner on Amazon’s homepage, there’s a “Today’s Deals” section on a giant screen near the front of the store, that tells you what’s new, trending, or on sale. For example, you could save 15 percent on the Echo Spot, 38 percent on a Rivet throw blanket (this one, specifically), and 47 percent on a Bodum coffee press. Oddly specific percentages aside, a lot of these deals were marked as in-store only; another incentive for shoppers to spend on the spot.

Get ahead of the holiday shopping craze.

It’s barely October, and yet already the store has several sections divided into IRL gift guides. This ranges from the quite literal (“Gifts for Pets” and “Gifts for Grownups”) to the suggestive (“If You Like Entertaining” and “If You Like Fiction”). There’s a pretty extensive kids’ section—though most of the kids in the store seemed more preoccupied with figuring out how to command Alexa to do their bidding—as well as an entire corner dedicated to Harry Potter called “Wizarding Wonders” that’ll be helpful for gifting to any Potterheads.

The goal is to guide indecisive shoppers by breaking down lists by budget, interest, and recipient.

If there’s such a thing as an Amazon superfan, they’ll love this shop.

Starting with the gift shop-esque section at the front of the store, which sells things like mugs with “Amazon 4-Star Soho” printed on the front, and ending with the oversaturation of Amazon-branded products in every category. You can pay with the Amazon app, if you are someone who is willing to sacrifice phone storage in the name of Amazon. Branded Amazon products also permeate every inch of the store— from home goods to piles of tech goodies.

Tech is the clear focal point…

Speaking of tech, given that most people go to Amazon for electronic gadgets, it shouldn’t have been a surprise for how much of an emphasis was put on pushing various technology in store. But between dedicated sections where shoppers could test out items like the iRobot and various offsprings of Alexa, and the peppering of almost every other section with at least one tech-y item, the shop felt a bit oversaturated with technology.

Of course, this has its perks: Tech is on the more expensive end of the spectrum in terms of Amazon purchases, and being able to touch and interact with these bigger-ticket items in person makes for a more confident buy. It also helps that there was a friendly gentleman stationed next to the Echo station, ready to assist all customers with their queries. This is something the not-so-tech-savvy will definitely appreciate.

…but the books may be the best part.

Despite the clear push for people to buy an Amazon tech product, the actual purchases tell a different story. I ascertained this after standing like a creep next to the cashiers and observing people buy things in silence for an uncomfortably long period of time, and aside from a handful of clear plastic umbrellas (it was raining that day), the most common things people seemed to buy were books. The reason for this might not necessarily have anything to do with volume—there were definitely tons of books, across genres, in the store—but more to do with the fact that, unlike a traditional bookstore, every book in there had already been reviewed by real people. Chalk it up to the cultural FOMO of not wanting to miss out on something that everyone’s discussing, but knowing that the books in this particular shop all had stellar reviews might have made it easier to justify a purchase.

The price tags in this store are all digital, and they include the name of the products, number of stars, and number of reviews. They also include two prices: One, the regular price, and the second, the Prime price. And yes, there is frequently a significant difference. Many of the Prime prices are around 45 percent off the original—potentially Amazon’s way of making up the difference of what Prime members would save on shipping costs if they bought that product online.

You don’t really know what to expect. Curating a store by rating instead of product type makes for quite the melange of items. Which means it can either be great, if you’re someone who likes to discover as they shop, or overwhelming. Some people came in knowing exactly what they were looking for (“Deep fryers!” announced one man as he entered the store, making a beeline for the kitchen section) while most people just seemed intrigued and curious as to what the “best of the best” might look like.

However, as curiosity seems to be the main customer, expect it to be crowded as most people peruse different sections at their leisure rather than stop in for a quick errand.

On one hand, the entire point of Amazon is that you have access to almost anything (from groceries to clothes to plants, all under one URL) and that you can enjoy that access from the convenience of your couch. The store, while useful in that you can see the products IRL, doesn’t necessarily speak to either of those perks. There is a lot of product, sure, but it’s not even a fraction of what’s available for perusal on Amazon. And as crowds are the reason most people tend to shop online—and the crowd in Amazon 4-Star, it should be noted, seemed comprised of mostly tourists or people there for the novelty of the shop—that could equally be a turn-off.

On the other, the store works for a very specific type of consumer. For the customer who thrives on personal recs, who is overwhelmed by variety, and who isn’t claustrophobic, you’ll love it. It’s different from other stores because it doesn’t outrightly feel like it’s the company telling you what to buy (although of course, it is), but rather it’s your peers. The products in the store, therefore, seem more trustworthy, by dint of being selected to be there.

One woman put it best, as she rifled through a section on cookware essentials near the front of the store. “There’s something about telling you that it’s the best of the best,” she said. And that assumption may be exactly what Amazon is banking on.

See more Amazon news: If You’re Not Buying Furniture from Amazon, You’re Missing Out The First Cashier-Less Amazon Grocery Store Is Here 10 Things Our Editors Will Only Ever Buy on Amazon