After 10 Years of Beige, This Creative Decided to Go Technicolor in Her Berlin Home 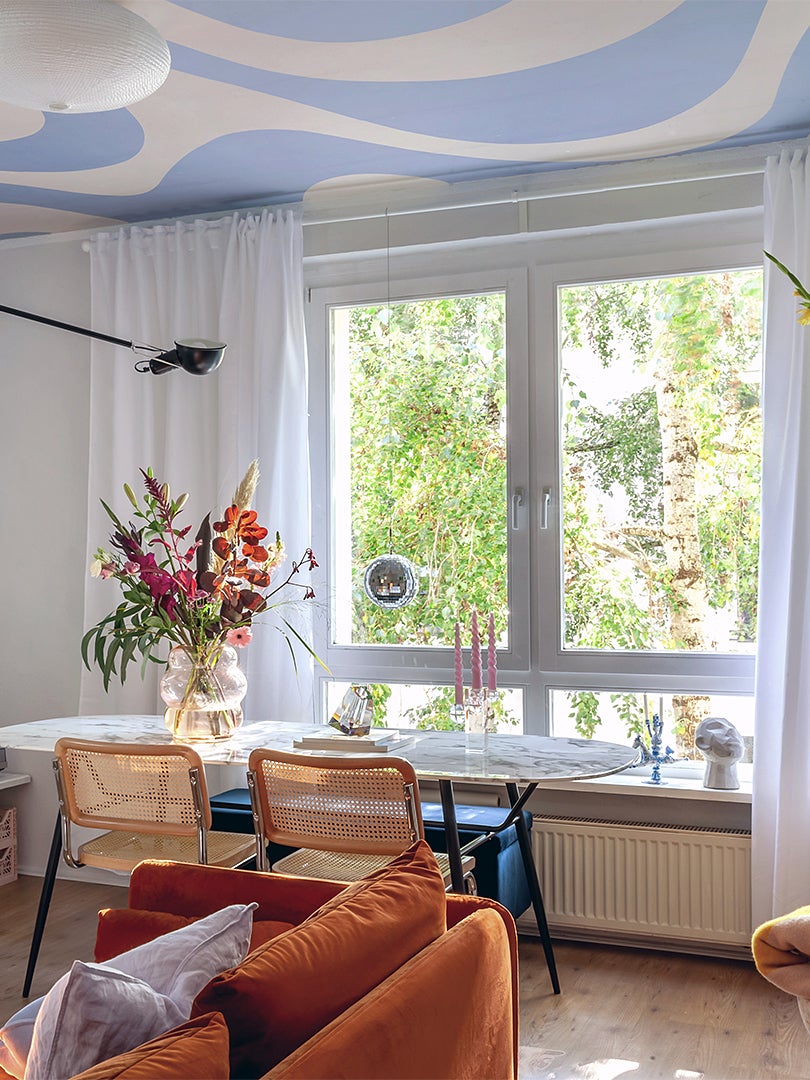 When artist Agi Raw moved back to Berlin in 2011, she never saw herself living there for very long, let alone in the roughly 580-square-foot apartment she found more than a decade ago in the eastern part of the city (now a hipster haven, then a neighborhood full of grandmas, or should we say omas). Although she grew up in Germany, moving from Poland when she was 5, Raw always thought she’d settle in France, where she had worked in the fashion industry and studied art. So for the first few months, she turned a blind eye to all the rental’s blights (namely a carpet in the kitchen, but also ladybug and butterfly stickers pasted all over the walls).

It took a while for Raw to even upgrade from a mattress on the floor to a bed frame—one she scored from her neighbor for just 60 euros. “I didn’t move with many things back to Germany,” recalls Raw. “I was just happy to have my own place.”

But suddenly five years had passed and she still hadn’t changed the place much. She met her then boyfriend, Chris, who moved in shortly after. “I thought, we’re not going to stay here long now. Then we decided to get married,” says Raw with a laugh. “Again, I said, okay, now we’ll move—that was two years ago.”

The next thing the couple knew, they were returning from their honeymoon and the country was closing down due to the pandemic. This time Raw realized that they weren’t going anywhere anytime soon. At that point, they had finally replaced the carpet with a classic black-and-white checkerboard vinyl; painted the walls in neutral shades; and furnished the place in similar swaths of cream, white, and gray. It wasn’t until she sent Chris out to pick up a new sofa slipcover that the apartment transformed from “50 shades of beige” into a colorful passion project. “I originally wanted the white one, but they were sold out,” shares Raw. The only options left? Green and orange. They went with the latter (it was the cheapest).

At first, Raw was less than enamored with the hue. “I assumed it would take a few days to adjust to the extreme color—it was like an orange stain on white paper,” she notes. “I needed to balance it out.” Her method was more color, added in without rhyme or reason. There was no plan, she stresses. “If I like it, I get it,” Raw says with a shrug. “It’s not like you’re ripping out a wall. If it really looks that bad, just paint over it or sell it.”

No, really—when it comes to decor, Raw mostly only does one-for-one swaps. Before buying, say, a new lamp, she’ll sell one she’s not in love with anymore. Living in a small space without a whole lot of closets requires being strategic. Nearly every piece of furniture doubles as storage: The blue bench by the window? It houses all the clothes she’s selling online. Friends and family often remark that it’s like living in a museum exhibition. “Chris will sometimes ask where something went, and I’ll tell him I sold it weeks ago!” says Raw.

But scouring the local marketplace on eBay for new pieces (it’s even where she scored the large R) isn’t the only way Raw brings vibrancy into their space. As an artist, she couldn’t resist a few hands-on projects: creating foam picture frames, tiling a nightstand, adding a slab of stone to fancify an IKEA Besta unit (it’s now extra seating, storage, and a media console all in one). Her ideas are often as simple as adding black electric tape to a medicine cabinet to mimic the grout lines in her bathroom, but sometimes they’re as troublesome as adhering removable wallpaper to the ceiling, an addition that took place only a few months ago.

Raw contemplated using paint but found a statement-making pattern at Berlate Studio that mimics the curvy mirrors hung in the hallway, connecting the apartment together. It was love at first sight. “Everything about it was perfect for our living room—airy enough for the low ceilings, bold but not too extreme,” she shares. “After we added the wallpaper, I told Chris we’re staying here for at least two more years.”

Someday, though, Raw insists the two will relocate—somewhere bigger, perhaps as big as a castle in England, where her husband is from. Having a myriad of rooms to continue decorating and experimenting with is the dream. Raw has seen her apartment project list grow smaller and smaller, and her artwork is more or less staying put. But she does admit to recently replacing a former gallery wall with floating shelves to house all her trinkets. “Chris is always asking, ‘When will you be finished?’” says Raw. Her response? “Never.”