Moody Blues and Antique Touches Rule in This Paris Apartment

Costantino Affuso and Paolo Badesco, creative companions and founders of Milan’s Raw home atelier and shop, bring whimsy and a sense of place to their Paris home. 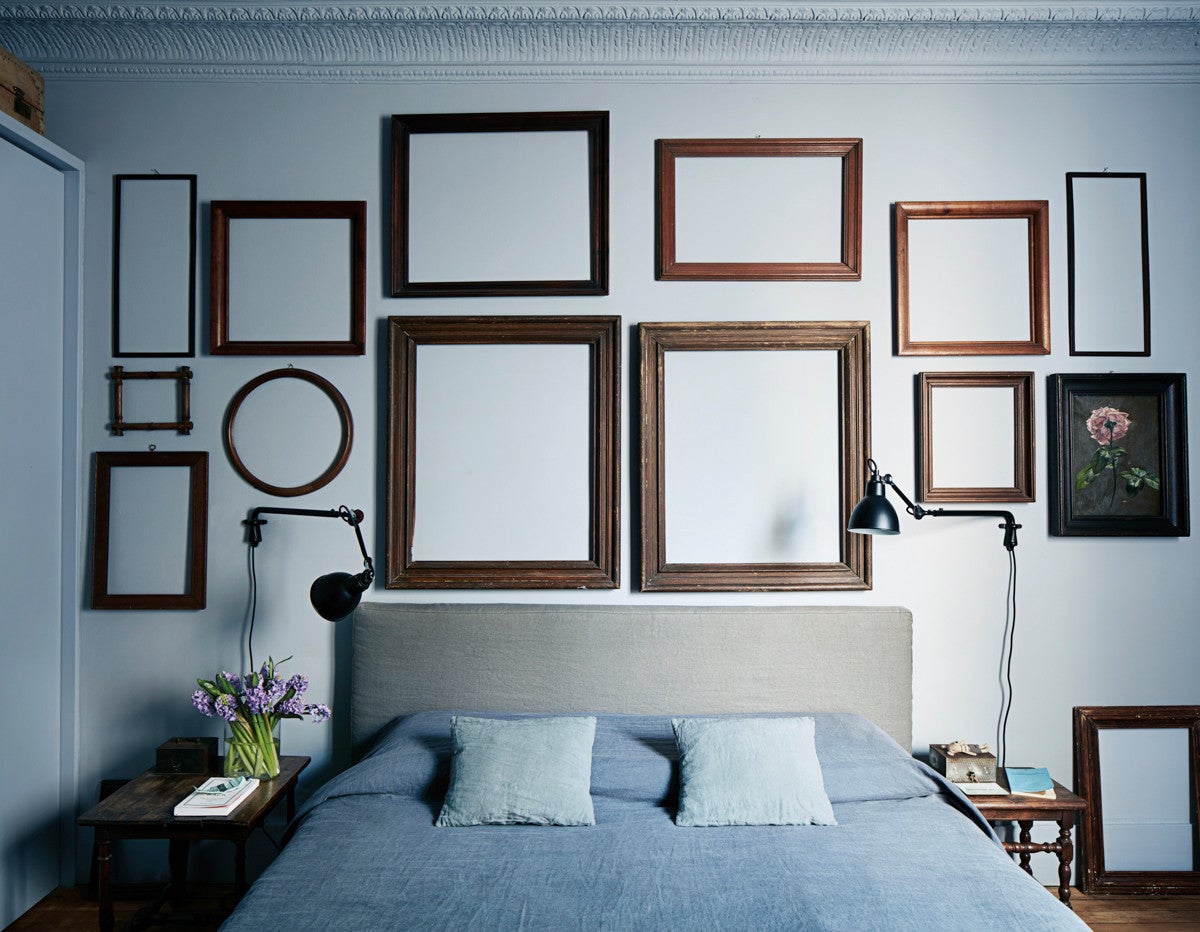 If there’s such a thing as a nomadic homebody, architect Costantino Affuso and designer Paolo Badesco ﬁt the type. The duo travels constantly, hopping between apartments in Paris and Milan every few weeks and going on frequent buying trips around Europe. Home is where they completely unwind, stretching out on the sofa with their two Irish setters and throwing together a casual dinner, usually with opera playing in the background.

Their walk-up apartment in Paris’s verdant 12th Arrondissement gives the sense of an exacting Italian modernist inhabiting a painter’s studio from the Belle Époque. (Born in Milan, Badesco’s French grandmother instilled in him a love of Parisian style.) That culturally ﬂuid, ancient-meets-modern aesthetic permeates most of their creative projects, including residential renovations, shop interiors for the natural beauty brand L’Erbolario and Danish fashion house Sand—as well as their own much-coveted store, Raw.

[In this image: Many of the materials in the flat are inherently Parisian, like the parquet floors and ornate moldings that Affuso (opposite, standing) and Badesco accentuate with 19th-century furniture and a few well-placed modern flourishes. Toio Floor Lamp, Flos, $1,495.]

Since opening 11 years ago as a tiny “cabinet of curiosities” on Corso Magenta, the Milan boutique expanded with a second, larger location on Via Palermo in the Brera design district in 2012. Raw has become synonymous with storied vintage Italian style—Milan’s answer to John Derian—stocking Astier de Villatte and Fornasetti accessories (and Derian pieces) alongside antique trunks, salvaged architectural elements, and beautifully worn furnishings.

[In this image: Affuso and Badesco often build displays around one “master piece,” like this vintage map. A bell jar and antique clock play supporting roles.]

“We love to reinterpret elements from the past,” says Affuso, “for example, a naked, unupholstered bergère armchair with a 1962 Toio lamp from Flos designed by Achille Castiglioni.” Everything is done with care and purpose, such as their upcoming line of home accessories, Raw Collection—which comes with the caveat from Badesco that “it won’t be fast; we’re taking our time and developing a complete language for this new way to live and feel.”

[In this image: A patinaed palette of antique wood, milky marble, and smoky blues carry throughout the home. Flip-Up Hobs Stove, Alpes Inox.]

That idea is stylishly put into practice at their Paris apartment, where a palette of misty blue-grays draws inspiration from the zinc roofs and bistro counters of their adopted city, as well as the light blue in the interiors of Montmartre’s Hôtel Particulier and Brasserie à L’Ancienne.

Affuso and Badesco were “very lucky” to find original finishings and only introduced new tile in the bathroom and kitchen, where they designed the oak cabinets themselves using wood sourced from old French shop counters. The Smeg appliances complement the vintage aesthetic, and Carrara marble counters feel solid and stately.

The pair’s approach overall is best described as restoration rather than renovation. “We try to interpret the intrinsic features of a place,” Affuso explains. “Sometimes under a painted wall we’ll find a ruined decoration, and we’ll keep that. We prefer the sound of a creaky wooden floor and being a little chilly if it means keeping the old, charming, blown-glass windows.”

In any project they undertake, they bring a respect for the architecture, history, and spirit of a space. “It’s sort of a puzzle,” says Badesco, “where every piece has a special meaning and represents a part of our lives.”

[In this image: In the bathroom, Affuso and Badesco covered the walls and floor with modern geometric tile, which contrasts with the antique shower doors and sink. Tiles, Kalos.]

“We try to interpret the intrinsic features of a place.”

This story originally appeared in the Winter 2017 issue with the headline Rhapsody in Blue.