Inside the musical performer's NYC apartment. 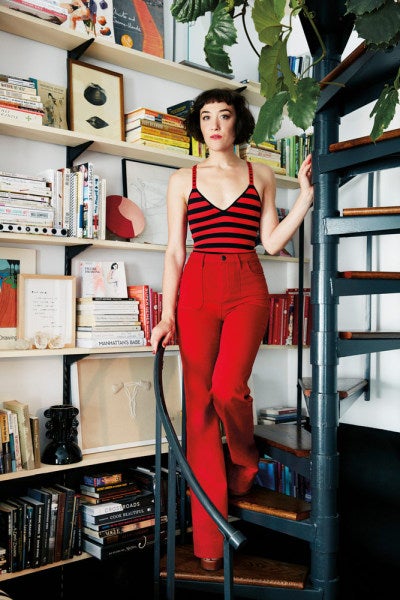 New York City DJ Mia Moretti describes her bedroom as a jewel box—a music-influenced one, naturally. “It’s like a portable turntable: You open it and it’s filled with treasures,” she explains.

The metaphor extends to her entire apartment on the Upper West Side. “I wanted each room to be its own little story, its own place,” says Moretti, a fixture on the downtown scene who deftly bridges the worlds of music, fashion, and art (she deejayed Jeremy Scott’s Coachella party for Moschino this past spring).

In her living room, the narrative is black and white, starting with the graphic Milo Baughman sofa. Originally inspired by a dark horizontal stripe adorning the wall of a friend’s apartment in Milan, Moretti doubled down on the theme, painting her own wall with an inky line and adding similarly patterned cushions and a rug. “More on more on more is how I am with life, fashion, and decor,” she says.

Piling on layers of texture and textiles is core to Moretti’s design philosophy, but her home has necessary understated moments, too—namely, the office nook in the living room. “My thoughts are so scattered. To come and sit down at a desk really centers me and helps focus my creativity,” she explains.

This is where she also keeps her turntable and records, which the DJ adoringly refers to as “my babies.” When Moretti moved to New York a decade ago, she purged an enormous vinyl collection, retaining only a tightly edited hundred or so discs. “Each one speaks to me and reminds me of something,” she says.

As in any small apartment, most of her furnishings ably multitask. The round dining table has “nine lives, like a cat: Sometimes it’s a poetry table for writing, sometimes it’s a place to stack my favorite books, or, if I’m having dinner with a couple of friends, we spread out there.”

Moretti transformed the loft space atop a narrow spiral staircase into her bedroom. It’s a relatively spare haven, with dark brown walls, neutral linens, and warm-toned ombré pillows. Surprisingly for a style-maker (Moretti curates the Fashion Week music for Alice + Olivia, and has worked with designers including Prabal Gurung and Peter Dundas), there’s not a closet in sight. “I don’t like sleeping in a room with tons of rolling racks and clothes. The bedroom should be a place of solace, a little escape from the world,” she says.

All her accessories—bags, shoes, sunglasses—are on display, either hanging or shelved. “Getting dressed should be fun,” says Moretti. “I like being able to walk into the closet, see a purse, and be like, ‘Oh, that speaks to me today.’ Everything is visual.”

That idea extends to her art collection—a mix of work by friends, as well as pieces she discovered while traveling, like the vintage oil paintings found in the back of a cowboy’s pickup truck in Mexico. As a board member of Housing Works, she is always adding new pieces, including a male nude watercolor she picked up at the nonprofit’s Design on a Dime fundraiser.

An ardent supporter of community, Moretti formed an artists’ collective, Chez Conversations, with several women—a poet, filmmaker, painter, musician—to create and promote work together. “We are very binary today in defining what success is, so we started this group to try to think beyond that,” she says.

Along with the collective’s violinist, Margot, Moretti performs as The Dolls, bringing an indie-pop vibe to shows in vast public spaces ranging from the Louvre to Angel Stadium. This summer, the duo will reprise their role as opening act for friend Katy Perry in South Africa.

Moretti approaches her diverse projects and performances with this same level of personal passion and laser-sharp focus. The DJ has a sixth sense for reading a room: “My playlists are specific to what’s in the space, the weather outside, all those little details. I try to build moments people can tap into.” Her next dream initiative? To conduct an orchestra, which would be scattered over the tiny terraces of her building’s courtyard. The neighbors can expect a rich soundscape.

This story originally appeared in the Summer 2018 issue with the headline “Mix Master.”

Inside a Yogi’s Tranquil, 500-Square-Foot NYC Home5 Inspiring Lessons From the Home of Etsy’s Trend ExpertInside a Feminine New York Apartment, With an Edgy Twist