I (temporarily) removed my rental’s sad cabinets, too. 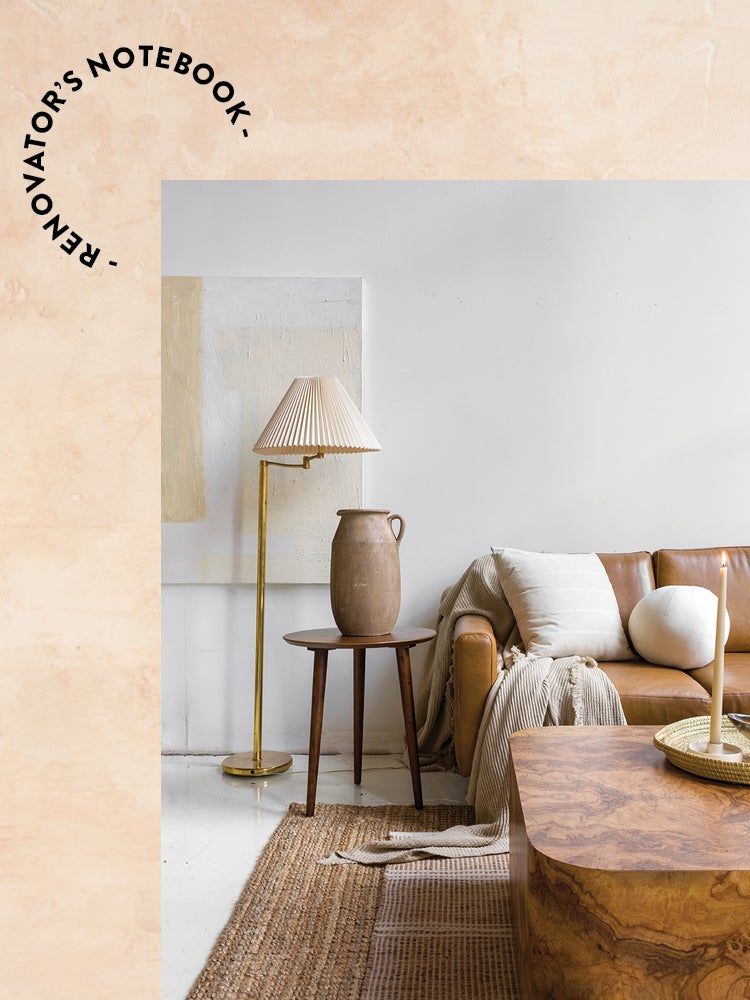 Top priority: Turn a drab loft kitchen and dining space into a cozy corner—and a picture-perfect backdrop for shoots.

Courtney Favini did not get her security deposit back when she moved out of her Atlanta loft recently, and that’s all right by her. “In the last three places I’ve lived, I haven’t gotten it back, and I just call it a wash because I get to do what I want,” says Favini. The interior stylist likes to tell herself that the risks she takes in her rentals pay off, literally—it’s often where she captures content for the brands she works with. And even if things don’t exactly balance out in the end, ripping out her upper kitchen cabinets, for example, is worth the peace it brings her. “My space has such a big influence on my energy,” she explains. “I would rather spend money and put in some elbow grease to have my home feel like me.”

Favini did in fact run her kitchen design plans by her building’s management team when she moved into the one-bedroom in June 2021. “I was like, ‘I’m probably going to make some changes; they’ll just be cosmetic. As long as you’re cool with that, I promise you, it’s gonna look better,’” she recalls. The seasoned renovator focused on upgrades that would ultimately be an improvement in the eyes of her landlord. And given there are over 700 units in the complex, after they heard her out, they were actually excited to have an apartment that stood out from the crowd.

The entire cooking zone was one big eyesore that needed addressing: The peninsula was awkward and off-center; the floors were a sad black color; and the upper cabinets looked slapped onto the wall. The most crucial step in Favini’s plan was securing a storage unit nearby where she could temporarily house all the things she could no longer stand to look at but knew she’d have to bring back to the apartment for the next tenant. For $250 a month and the help of a mover friend (whom she paid in both cash and beer), she was able to stow the ugly uppers, island, dishwasher, range, and fridge out of sight and out of mind. Then the real work began. Ahead, in her own words, she shares how she put her stamp on the space and why she has no regrets.

Save: A Clean Slate

The first thing I did was paint the black floors white. Luckily, I got the keys to the apartment about a month before I moved so I was able to do it without working around boxes and furniture. It took a while: First, I sanded everything with a palm sander and then applied four to five coats of Behr Ultra Pure White (an oil-based exterior/porch paint that’s good for high-foot-traffic areas) using a roller. I learned quickly that I should have used an epoxy instead of just white paint because they did get scraped up over time and I had to do some touch-ups.

I shockingly found a Smeg fridge on Facebook Marketplace for $1,000, which I feel is unheard of. So I decided to snag it, knowing I’d take it with me to my next home, and put the clunky black one in storage. Everything else I sourced through Home Depot—the dishwasher ($449) and the range ($584) are both by GE in its bisque color. Going through a big-box store made the delivery and setup in my building a lot easier.

To cover up my dark granite counters, I purchased a bag of Ardex (a textured concrete-resurfacing compound) for around $40 on Amazon. After roughing up the surface with sandpaper, I mixed the powder with water, applied it on top with a putty knife, and sealed it (a water-based one will do). It goes so much better with the white cabinets.

Paying a plumber $500 to take out my stainless steel kitchen sink and install a beautiful white porcelain one with a brass faucet was the change that made me really feel at home. The basin was on the pricier side, ringing in at $618, but the antique-style faucet from Overstock was a steal at $220.

Save: A Nod to a Backsplash

I would have loved to do a superearthy, organic tile backsplash, but based on the swaps I told my building I was already going to make, I knew that would be way too big of a hassle. The told me that paint doesn’t matter, though, so I decided to add some visual interest to the wall by swathing everything below my open shelf (it’s actually a stair riser I got from a local reuse center!) in Behr’s Cream Puff. The peg rail I bought from the Container Store also got doused in the color.

Save: A Lighting Outfit Change

The ceilings are so high (20 feet!) that to have asked an electrician to come in and swap the light fixture would have called for a huge ladder. Instead I did it myself without rewiring anything: I cut the plasticky shade off and slipped a paper lantern over the existing bulb. The same went for my living-slash-dining room sconce, but in that case I replaced the old cover with a rattan bowl (I cut a hole through the base) and screwed on a bigger globe lightbulb.

My Smeg fridge and the $100 vintage wood chest I used as my makeshift pantry were must-keeps as I prepared to move back to my home state of Pennsylvania. I left the other new cream appliances, along with the sink and the $200 island and stools I got from an antiques auction. Then I returned to my storage unit to bring back the old black fridge, as well as the uppers so the new tenants have the option of hanging them again. I told my management to tell the next renters that they’re getting a space where things were chosen thoughtfully.