The kitchen peninsula is a mini library. 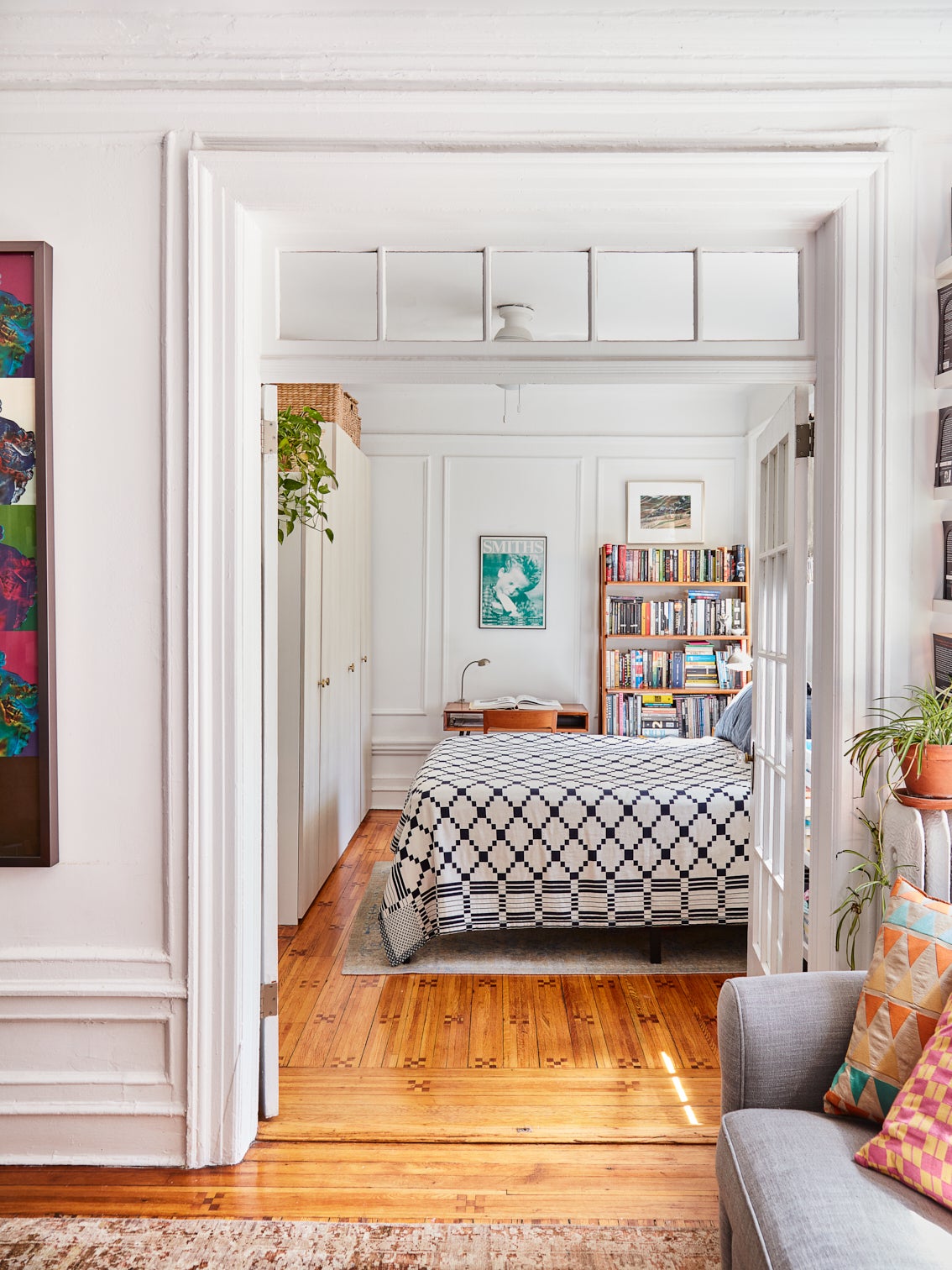 Grace Edinger and Nick Shuit knew they were meant to be when they realized they organize their books the same way: chronologically, by country. “We’re both avid readers, but Grace loves checking things out. I like to own them,” says Shuit. The couple’s collection is so big now, almost anytime a friend comes over to the Prospect Park, Brooklyn, apartment they share with their two kids, that guest ends up leaving with a freebie (or two). But occasionally giving away titles was never going to solve the fact that the 700-square-foot home was overflowing with them. Books were stacked above doorways and piled on top of old radiator niches. So when Edinger and Shuit hired Julie Tran and Khoi Nguyen, the wife-and-husband architects behind Future Projects, to renovate the kitchen and bathroom, the designers thought strategically about where and how the family’s ever-expanding library would fit into the picture.

By taking down the wall that once separated the kitchen from the main living space, Nguyen and Tran, along with general contractor Tech Crew Inc., introduced natural light to the cooking zone and were able to put a peninsula in its place. Instead of barstools, there are now bookcases underneath the overhang, and, above the sink, dedicated shelves for—what else!—cookbooks.

The Small Layout Change With a Big Impact

The range was in a less than optimal position, closest to the corner window, which is at a slight angle, resulting in an awkward gap in between the appliance and the wall. By swapping the placement of the sink and the range, Future Projects was able to extend the countertop the full width of the room and squeeze in a 24-inch dishwasher that didn’t exist before. “We were pretty surprised we were able to fit it in,” notes Tran.

Filling in the Cracks

When the architects learned that the building no longer had use for the nearby dumbwaiter, they took it over and turned it into a pantry. “Gaining just 2 extra feet to consolidate all our food has been great,” says Edinger. To the left of the new oven, the designers snuck in a 6-inch-wide cubby for spices; there’s a matching one directly above it for cutting boards.

A Slab That Keeps on Giving

Typically, when stone shopping, you have to purchase a slab in its entirety. That’s great if you have a lot of surface area to cover, but it’s not so ideal when you need only a portion. Knowing this, Tran and Nguyen worked the leftovers from the soapstone countertop into the rest of the design. They used one of the spare pieces to create a waterfall edge by the kitchen window, while two additional offcuts top the shallow shelving niches in the bathroom.

No More Soaking Up Square Feet

“This bathroom is smaller than your typical one,” says Nguyen. In the existing layout, the “gigantic” tub ran parallel with the wall, leaving only a sliver of space near the door for the vanity. By reorienting the shower space next to the window, they were able to offer the family of four shelves for their towels and a roomy under-the-sink cabinet.

The wallpaper was all Edinger’s idea. “The tile in the space was so classic that I wanted something to give it a little more personality,” she shares. When she narrowed her swatches down to five or so samples, she had her eldest weigh in on the final pick. “She really liked the monkeys and birds,” adds Edinger.

When Shuit and Edinger moved to Brooklyn from Manhattan’s East Village neighborhood back in 2018, they took their IKEA Billy bookcases with them. But after a while they realized they didn’t fit the space as well. “It looked a little janky,” recalls Edinger. After researching their options, they decided to splurge on Vitsœ’s modular system, which is known for being able to hold a ton of weight and can be reconfigured almost endlessly. One such way: adding room for a desk, so that Edinger can work from home comfortably.

Naturally, the pair’s kids are budding bibliophiles. In their daughter’s room, a cushy floor bed sets her up for ultimate independence (“She could get in and out on her own from a pretty young age,” says Edinger), and it’s a fine spot to curl up with a copy of Goodnight Moon.