It Took 5,000 Square Feet of Wood Stain to De-Orangeify This Maine Cabin

“My arms were sore for three months.” 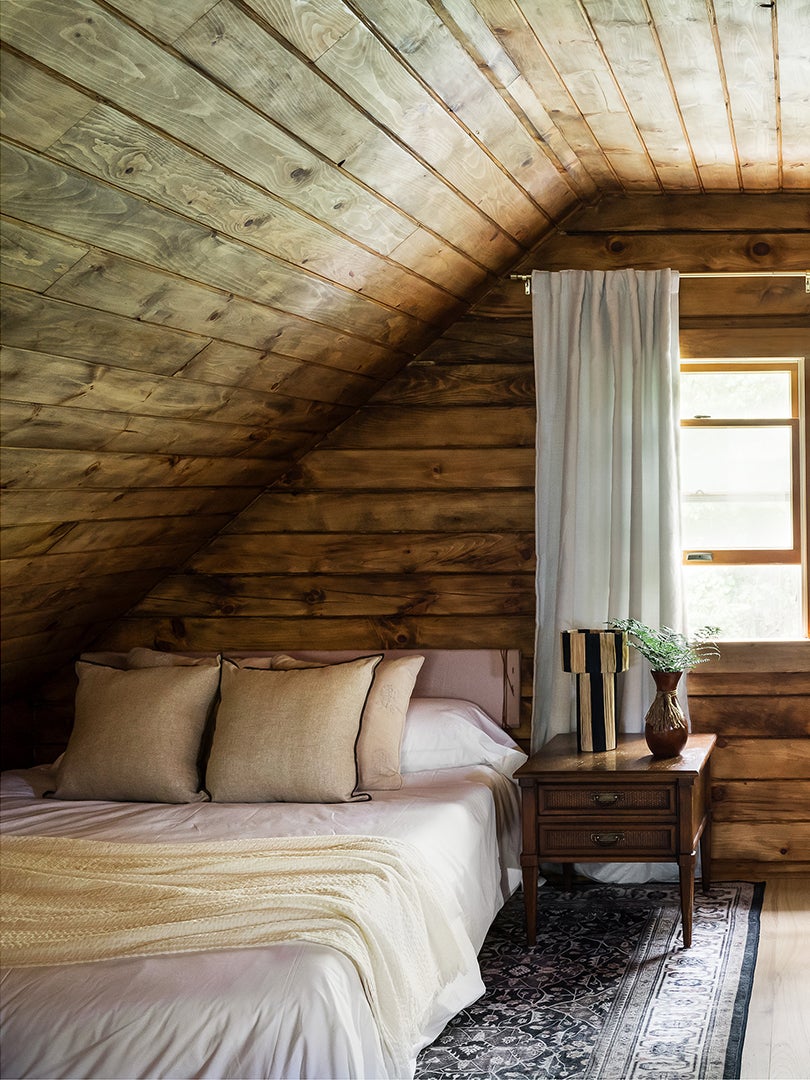 While driving up the coast of Maine to visit a client’s home last Thanksgiving, Massachusetts-based designer Hannah Oravec was greeted by autumn’s ochre- and honey-tinged foliage—it’s the reason she and her husband, Michael, started scouring Zillow the very next day for a place of their own. So it’s a little ironic that the 1,200-square-foot cabin that they ended up purchasing the following February also had an amber glow to it…just not the awe-inspiring kind. “It was very dark,” recalls the Lawless Design founder. “There was an orange polyurethane finish on the wood that was very 1980s.”

The home’s proximity to the water and sprawling five acres were enough reason for them to dedicate four months to updating the outdated interior, starting with sanding and restaining the space’s pine logs and v-groove board paneling. Hannah estimates they bought more than 5,000 square feet’s worth of stain—no corner went untouched. “My arms were sore for three months straight,” she says with a laugh. “It was definitely a workout.”

Who Needs the Gym When You Have an Orbital Sander?

The pro of going with stains from Rubio Monocoat is implied in its name: It only requires one coat. The small downside? To get a supersmooth finish, Hannah and Michael had to sand every surface four (!) times, starting with a 40-grit sandpaper (to remove all of the old finish), then an 80-grit sandpaper, then a 120-grit sandpaper. Before moving to the final step, a 220-grit sandpaper, the couple rubbed damp cloths over the wood to make sure there was no lingering dust and that the grain lifted slightly, allowing for the most level result possible.

The designer learned from Michael, who has experience making wood furniture, that using a flashlight to catch inconsistencies was more accurate than running her fingers over the boards. For extra ease and speed, they upgraded from their hand sanders early to two Bosch orbit sanders. “It was awesome to have turbo mode,” says Hannah.

Three Times the Stain Is the Charm

In order to rid the planks of any sort of orange, Hannah chose three different stains to use throughout the cabin. In the kitchen, bathroom, living room, and dining area, she used an opaque white tint that was created by pairing two of Rubio’s treatments together (Pre-easy, which acts as a primer, and Super White). On the ceilings in the main bedroom and bathrooms, she opted for its Natural color. For the rest, plus the lofted bedroom walls, she went with a mix of Pure and Chocolate for a warmer touch. “I wanted it to still be a little dark and moody, to make it really cozy,” she explains. In addition to the stains and paints used throughout the home having no VOCs, she prioritized nontoxic, Oeko Tex–certified fabrics, natural-fiber rugs, and vintage shopping to keep their footprint as sustainable as possible.

One Wall Can Have It All

Tearing out the old peninsula made way for a more entertaining-friendly travertine dining table. It also gave the couple additional space to reconfigure the lower cabinets in order to carve out room for their new farmhouse sink. They painted the cupboards black and bought color-coordinating quick-ship tile from Fireclay (in Basalt) to use on the countertops. “Michael read online how to DIY it by putting cement down and laying it all out,” says Hannah. “It only took a weekend.”

To support the 100-pound stone sink they bought on Etsy for the bathroom, Michael hit up the local salvaged-wood shop and built a framing structure out of old beams and scrap pieces. When the piece arrived all the way from Europe, they could plop it right into the secure nook. But the real beauty of the system is that it leaves the majority of the stone exposed for guests to admire, and “there’s a little shelf down below,” Hannah points out.

In an effort to not have too much going on in such a tight space, the designer continued the checkered Fireclay shower tile (in Antique and Carbon) onto the edges of the tub and the floor. “It makes it feel bigger and not so choppy,” she notes. It’s also a bold departure from the rest of the home’s wood ways.