This Kazakhstan Home’s Designer Not Only Accepted Its Imperfections, She Added New Ones

The kitchen wall was painted with a “chaotic edge.” 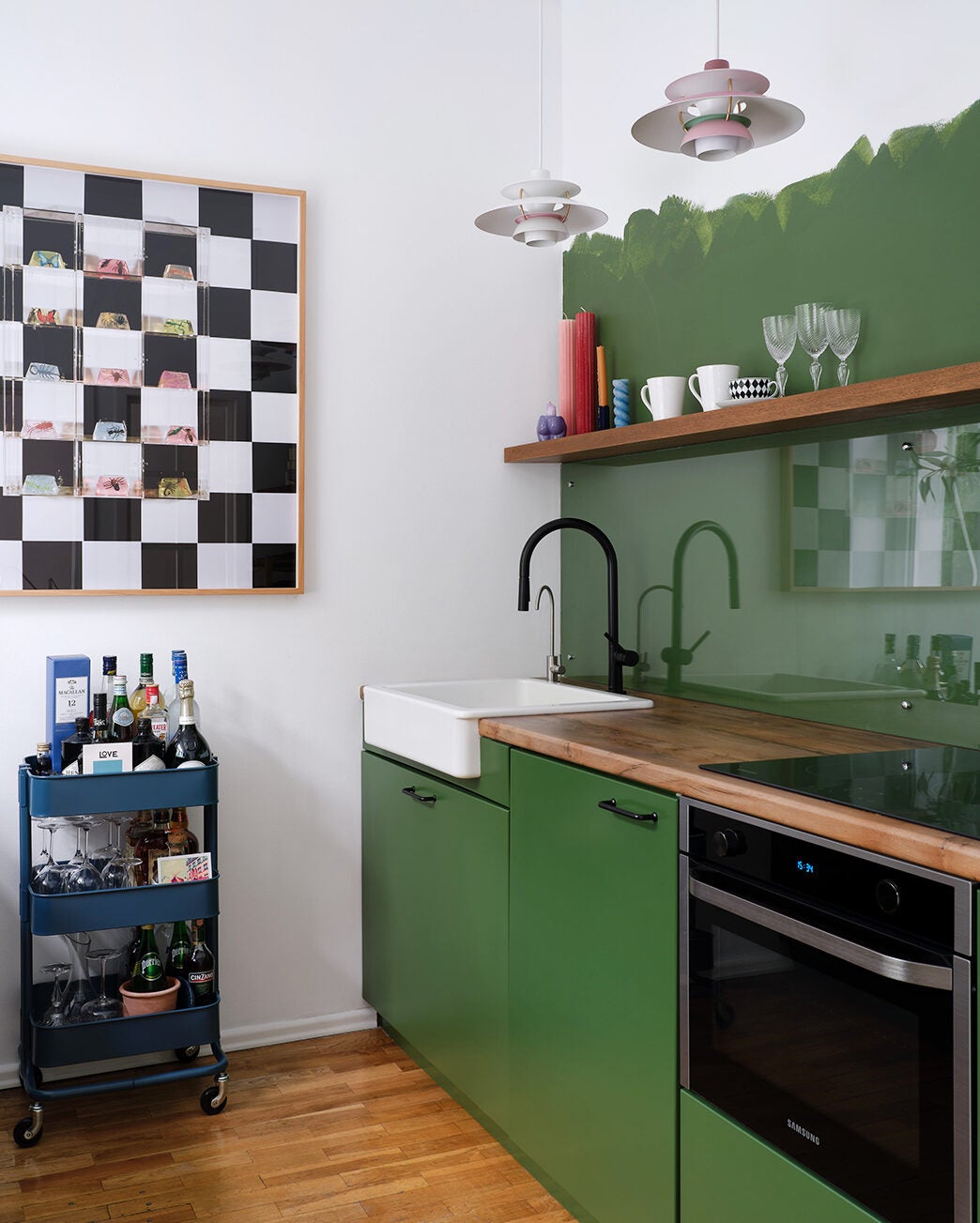 Elina Mussakulova, cofounder of Kazakhstan-based interior studio Sdelaemremont.kz, has never designed a kitchen without a vent hood. So when her client, Mikhail, was adamant he didn’t want one in his apartment’s galley space (he’s not a big cook and the building’s regulations did not require extract ventilation), Mussakulova felt anxious, to say the least. “He had to tell me to calm down,” she says with a laugh. But she didn’t just leave the wall behind the stovetop blank. Instead it’s half painted a dark green. “I asked the builder to paint it with a chaotic edge, to almost bring a sense of carelessness, but he was too scared to do the bold brushstrokes and it looked too neat,” recalls Mussakulova. So she picked up a paintbrush and did it herself.

A number of these undone elements elegantly appear in Mikhail’s 527-square-foot space. Located in the city of Almaty, the apartment dates back to 1952 and stole his heart from the very first viewing, “but it was in such bad condition, and so old, that it scared me at first,” he admits. Mussakulova helped translate his Pinterest boards, which were filled with moody, light-filled apartments in Berlin, into a space that honored the integrity of the building. She also reconfigured the layout, swapping the living room for a bedroom with a walk-in wardrobe, while the bedroom became a living room with an opening to the kitchen. A previously narrow corridor was freed up in the process, the perfect utility closet.

While the designer restored some original details, such as doors and cornices, most of the home’s charm comes from the patinated walls—caked-in, decades-old paper and cracks that she left as is. Mussakulova also kept the existing parquet floor, a big cost saver. When the layout tweaks exposed places where it was missing, such as between the entryway and the sitting room, she filled in the gaps with white tile. “You have to be ready to accept imperfections,” says Mussakulova of working with existing features. And while embracing raw elements can veer cold and Brutalist, she notes, “if you expose just some details and not all, the effect can be warm and welcoming.”

Because this is Mikhail’s first home, he felt ready to invest in some furniture classics like a Pierre Paulin Pacha lounge chair and Louis Poulsen lamps (a “you only live once” splurge) he scored at a store in Copenhagen. “I wanted to have pieces that tell a story, that can be passed down,” he says. Mussakulova tried to steer him away from the Verner Panton “flowerpot” lights in the hallway (“I feel like you see them a lot” she justifies), but Mikhail won out. One detail she had to convince him about was the large, abstract pendant lamp above the bed. “Lights are the most noticeable feature in interiors. You can change the feel of a space by simply changing the lighting,” she shares.

Both of them were firmly on the same page when it came to art. Mussakulova is “in love” with the work by Kazakh artist Kuralay Meirbekova, and as luck would have it, she was already on Mikhail’s radar. He jumped at purchasing the painting that now hangs over the console in the hallway. “For me, this piece is like the face of the interior,” the designer says of the portrait.

These days when he’s hanging out at home, Mikhail enjoys movie nights, coupled with a glass of wine and a scented candle. In other words, you still won’t find him whipping up a feast for one in the kitchen. The customer is (almost) always right.