The family found a more natural way to stay cool in the summer. 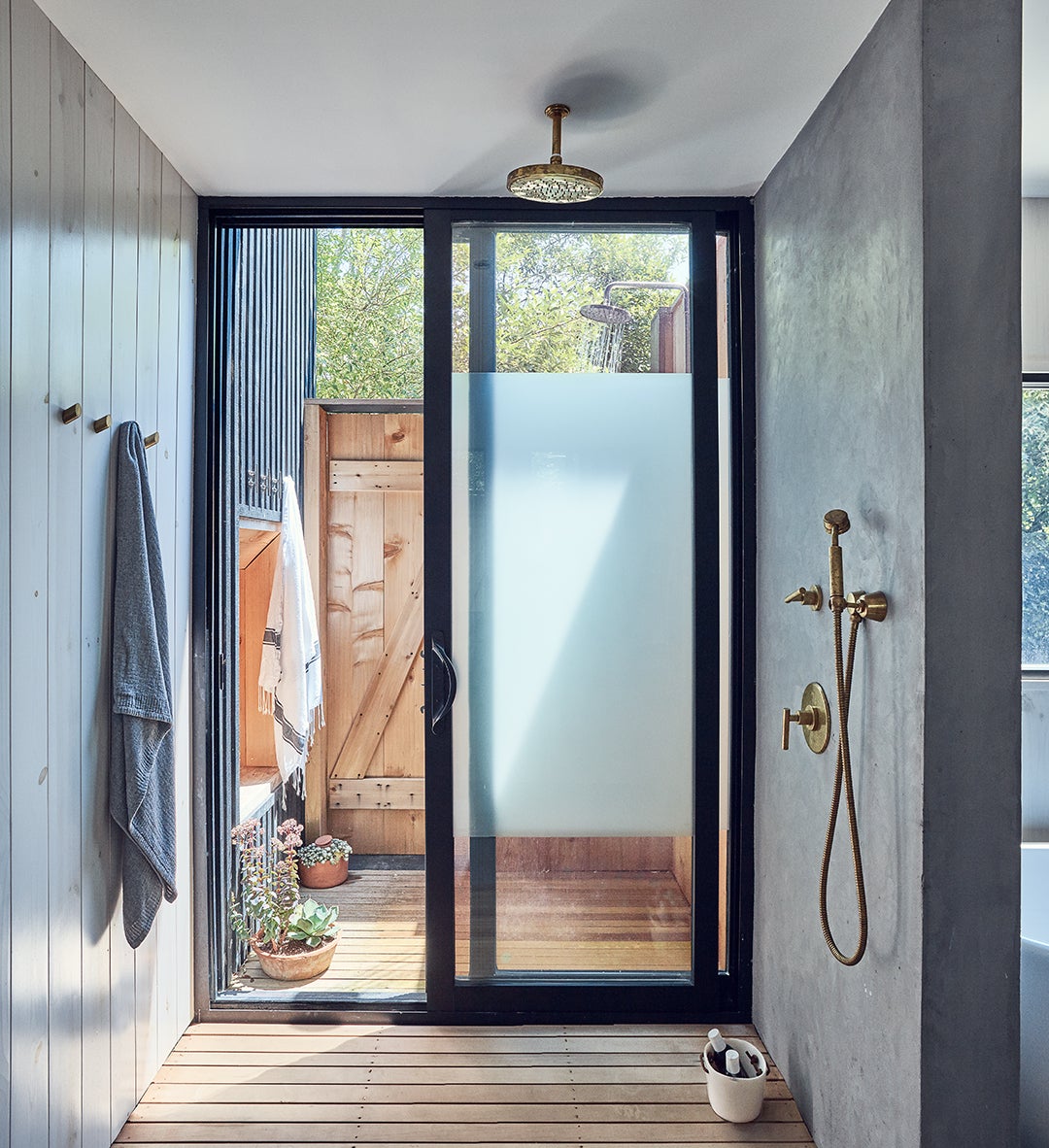 It’s no surprise that after growing up in Ireland—where the ocean is never more than a few hours away—and living on other islands, fashion designer Maria McManus and her husband, Mark Gibson, found themselves longing for a seaside escape from their current home base in New York City. After giving the Hamptons a test-drive, the two fell in love with slower-paced Montauk. “There’s something about when you get to the top of the hill before driving into town that has an instant vacation vibe,” McManus says with a happy sigh. “It’s quite similar to the Irish landscape; I think it drew us in subconsciously.”

After countless summers of renting, the couple decided to go all in, purchasing a 1,200-square-foot A-frame to make their own nearly 10 years ago. “We fell in love with the shape of it,” recalls McManus. “It’s really close to the beach, which is incredible. But we also knew as soon as we bought it that we would need to renovate.”

For starters, every floor in the two-level home was covered in carpet—not exactly conducive to wet, sandy feet, especially when you throw two young daughters (now 8 and 10) into the mix. Other eyesores included popcorn ceilings; a spiral staircase smack in the middle; a teeny-tiny bathroom; and a massive hallway of empty, unusable space. McManus called upon friend and architect Thomas Ryan to start structurally switching things up.

Slowly but surely Ryan began taking the home down to its studs, while still making sure to preserve its bones. “It was more about trying to let the house be itself, rather than adding something new to it,” he shares.

And really, the only thing Ryan did add was a staircase to the new entryway, which tacked on 100 square feet to the house but freed up hundreds more. The architect focused on the strategic use of space, carving out three bedrooms—a main, one for the girls, and a place for guests—from the original floor plan by placing all of them on ground level. “We never had to put in an AC unit because all the bedrooms are about 10 degrees cooler than the upper floor,” notes McManus. They finished the floors in high-traffic areas with concrete, so it’s extra-cooling in the summer months, but put a layer of heating underneath to keep things cozy in the winter.

Upstairs, the main living space (one large open area that encompasses the kitchen, dining, and living areas) is bookended by sliding doors that naturally generate a cross-breeze courtesy of the Atlantic Ocean. “There are really only three days in August when we’re like, ‘Oh, God, I wouldn’t mind air-conditioning,’” McManus says with a laugh. “Other than that, it’s great.”

And being sustainably conscious is McManus’s M.O. Outside in the sandy backyard you’ll spot a compost bin and garden, which replaced the previous owner’s gravel driveway. Aside from the vegetables growing, the entire landscape has been restored to the Montauk dune ecosystem. Currently the family is on a wait list for Tesla solar panels, though the sun illuminates most of the home, shining through the windows and skylights. And although they’d love extra space for a playroom, McManus is determined to live with the property’s original size to keep their energy-consumption levels low.

“It was honestly the attitude Maria and Mark had from day one,” stresses Ryan. “They were very aware as a city family that, while having a getaway home is nice, you don’t need a 30,000-square-foot estate.”

The group approached the renovation as any New Yorkers acclimated to small homes would, finding the best way to utilize every inch of space rather than generating more. For a split second McManus considered floating shelves in the kitchen, but opted for upper cabinets instead. “It’s clean and clutter-free,” she notes, preferring to close the doors on any messes that arise.

Part of the family’s cleanliness can also be attributed to the neutral, natural decor choices McManus made—a mixture of cedarwood, pine, concrete, leather, and iron—and a pared-down palette for both the indoors and out.

“Essentially the whole thing is clad in wood, so you’re able to feel this transition that happens—as you move higher up the space, it becomes a little brighter because the light just bounces off a little differently as the paint is less transparent,” explains Ryan.

Wood a big part of the picture, from the exposed pony walls Ryan couldn’t remove (now the perfect space to store kindling for the wood-burning stove) to the kitchen island and the quasi-outdoor shower that can be accessed from both the main bedroom and garden. “Everyone thought I was completely insane,” says McManus, shaking her head. “I was trying to create an indoor shower that you could easily access from the backyard. But now we actually use the outdoor shower pretty much exclusively.” It’s great even just to rinse off your feet after a day at the beach.

The creation is one of McManus’s favorite parts of the home—that and the back deck that easily becomes an extension of the dining room in the warmer months. Family and friends tend to gravitate there when they visit, soaking up the salty air, summer sun, and sea views.

Where I buy plants and gardening supplies: Native Plants Montauk.

Biggest splurge: My Brazilian Percival Lafer vintage sofa from Morentz—surprisingly the leather, although from the ’70s, has held up well despite salty and sandy kids coming and going from the beach.

Biggest save: We used pinewood, which is not a very expensive wood, on the walls throughout the house. The additional layer of wood paneling also added insulation.

Textile in my home that is so me: My favorite item in the house is an antique Italian coffee table. My husband and I fell in love with it at a friend’s garage sale.

I loved working with: My architect Thomas Ryan of TW Ryan Architecture.

Other highly recommended craftspeople and brands: We had our dining table made by Sawkille in upstate New York, and our natural brass handrail in the stairwell was custom-made by Peconic Ironwork.

If I could go back in time, I would: I would have added on an additional room or den; with two children and all of their friends, in the wintertime it would be wonderful if they had a space to gather.