Finally, an Easy-as-1-2-3 Equation for Styling Your Bookshelves

Courtesy of the new book “How to Live With Objects.” 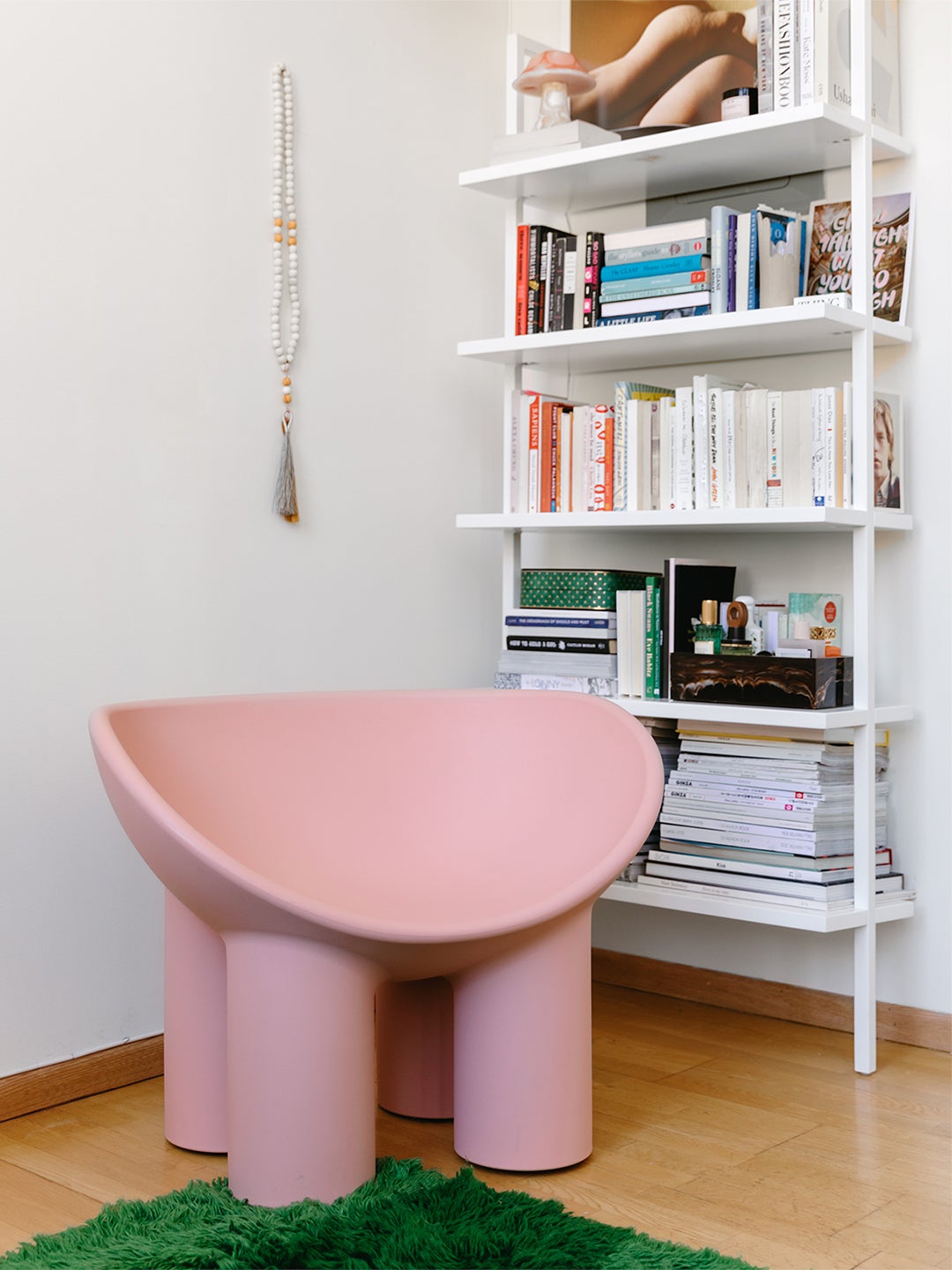 In their new book, How to Live With Objects, authors Monica Khemsurov and Jill Singer, the founders of cool-kid design destination Sight Unseen, show us exactly what makes a home feel personal: the things you put in it. Instead of being a straight-up decorating book, How to Live With Objects is a primer for personal style, and chapters go back and forth between doling out solid design advice and giving readers a peek into some the coolest homes on the planet.

Near the end of the eye-candy-filled tome, the authors demystify one of the trickiest parts of collecting objects for your home—putting them all together in a way that looks intentional (but also totally natural). They explain in the book:

There’s a reason we chose the word styling as the title of our final chapter: Whereas decorating refers to creating a holistic vision for a space at the macro level, with the objects acting as supporting characters in a larger story, styling is more about how you arrange things at the micro level, creating moments and vignettes that highlight the objects in the most interesting and aesthetically pleasing ways. You decorate a room; you style a shelf. While the most aspirational interiors admittedly nail both, there are plenty of books about decorating out there, and this isn’t one of them. If you’re truly an object lover, focusing your efforts around your favorite possessions may feel like second nature anyway: “I’ve never opened a decorating magazine for inspiration in my life,” says Linda Meyers of Wary Meyers. “First, we find something, and then we create a space to organize it or display it. The interior is created to house the cool objects. You want to show them off—even just to yourself.”

Here, we’ll be sharing our own general thoughts about how to successfully incorporate your objects into your interior, as well as asking a few experts and homeowners for their best insider tips. The upside of this approach is that, unlike decorating advice, which is subject more to the whims of what’s fashionable at any given time, styling advice is about spatial positioning and other concepts that exist outside the realm of trends, so these are ideas you can use for years—or decades—to come.

As Meyers said, when you really love your objects—and have invested time and energy into procuring really great ones—you want to show them off. And the best way to show them off properly is to give them a little breathing room so they look as singular and as prominent as possible and can make a greater visual impact. “I wouldn’t call myself a minimalist, but I think things need space around them to be properly appreciated,” London design writer Tom Morris once told the blog The Modern House. This doesn’t mean that you can’t create clusters of objects where they do make sense, like a grouping of five modern vases with a similar lava finish, but if you have an especially standout piece, you’ll want to highlight it by giving it unobstructed views and not associating it too closely with another object that could influence the way it’s perceived. This may mean that you have to make tough choices about how to allocate your shelf or table space if it’s limited, but that’s an important part of the process, too. “In Donald Judd’s interiors, he only brought an object in as it was needed and as it could hold the space,” notes Friedman Benda’s Alex Gilbert. “That’s a nice philosophy. You have to bring new things into your space consciously.”

If you want the objects in your home to be entirely mid-century or entirely postmodern, we aren’t going to tell you any different. But most of us can’t help loving objects of all different types and aesthetics, at which point the fundamental question of styling becomes a question of how to make them all play nicely together, in visual harmony. That’s where the concepts of juxtaposition and layering come in—confidently mixing the natural with the man-made, the vintage with the contemporary, the organic with the linear. There’s no one way to do this; it relies on finding other types of visual connections like shape or color, and trying things out until you find a combination that works. But the bottom line is that layering disparate types of objects and artworks together is a good thing and will make your interiors look more sophisticated and thoughtful. Gilbert keeps a megalodon tooth mounted on the wall next to her best artworks. Kinder Modern’s Lora Appleton will place a $1 find from a flea market alongside a work by an emerging maker. “There’s a conversation that happens between them,” she says. “The mix of even having an object next to a plant, and how that changes the scale or the feeling of something—I think that’s how we live now.”

Whether your objects are similar or different, clustered together or spread out and singular, deciding on their exact spatial placement in a room or on a table is all about creating the most harmonious visual balance, where items displayed near each other don’t look completely out of scale, and one side of a room or a mantel doesn’t feel too heavy or crowded compared to the other side. A 24-inch-tall vase will often look better next to a 16-inch-tall sculpture than a 2-inch-tall paperweight, for example, and if you have one area where your objects are very evenly spaced out and symmetrical, the neighboring area might benefit from being more asymmetrical. There are some rules of thumb you can use to find visual balance—interior designer Keren Richter once described her approach to styling bookshelves as “triangulation,” where a visually prominent object on one shelf can be balanced by two less visually prominent objects placed on the shelf below it—but the process relies mostly on looking carefully, using your intuition, and being attuned to the ways your objects can complement rather than fight each other.

When you’ve played around with the styling of your objects for a while and have found a configuration that really works, it can be tempting to leave everything exactly as it is, in perpetuity. But who wants to live in a museum? The point of incorporating objects into your home is that they help breathe life and personality into your space, and that entails letting things change and evolve as your interests change, or even just one moment when you feel like creating new energy in a room. The process should be fun and flexible, not stuffy and static. “We have a picture rail around our dining room that we use for objects,” says Gilbert. “I’ll wake up one Sunday morning, and my husband will have been up late rearranging everything. The next weekend, I’ll do it. Not being so preconceived about the placement of our objects is really liberating. Even for large items like the sofa—you might surprise yourself by flipping it and having it face the windows instead.” Allowing yourself the freedom to revisit your object placements on a whim also makes it easier to incorporate new things and repurpose old ones: Instead of getting rid of a vase that isn’t working on the dining table, you might recontextualize it by moving it to the bathroom instead.

The Art of the Edit

If the question of how much is too much were easy to solve, Marie Kondo wouldn’t have built a multimillion-dollar empire around answering it. When your objects all carry meaning and memories, though, the process gets even harder—do our John Hogan glass paperweights bring us joy? Of course, but so do the 40 other objects gunning for our limited shelf space. Forcing yourself to edit, though, is a critical part of the styling process, because it’s the only way to ensure that the objects you do display have enough space to shine. The first step is to address the amount of objects you acquire in the first place. Can you post a photo of that new find instead of buying it? Can you think of where you’ll put it if you do bring it home? If not, says Meyers, you might want to pass it by. Her rule while vintage shopping is, “If it doesn’t have a home, it’s not allowed to roam,” she says. Second, you have to decide how much to display in a certain room or area so that it looks layered but not cluttered. A general rule is that shelves can be about quantity, but surfaces should be about quality, so keep those more intentional. Third, you have to determine when it’s time to sell or donate some of your objects entirely, if your space is filling up. Our feeling on this is, if it’s something sentimental, ask yourself if the memory itself can somehow be enough for you, without having to keep the object. If it’s something more aesthetic, put it in a closet for a month or two. If you don’t miss it, that’s probably all you need to know.