In This Airy L.A. House, Window Seats Are Best Used for Folding Laundry

In the kitchen, the designer put her number-one rule into play. 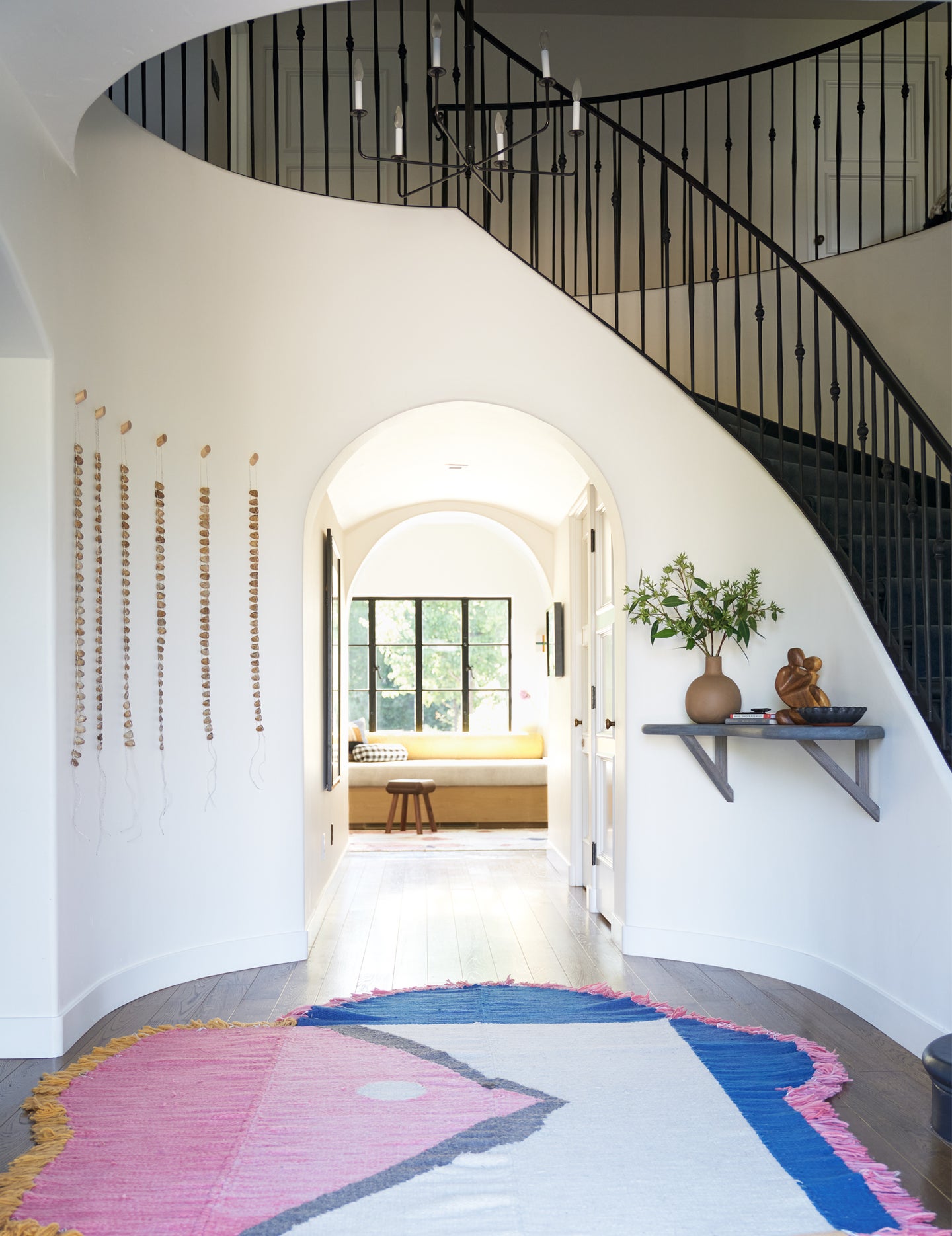 When Jennifer Crystal Foley and her husband, Mike, hired interior designer Liza Reyes, they weren’t just getting someone who was going to sort through paint samples on their behalf. They were getting a fighter. “I always said that Liza was the protector of the house,” shares Jennifer. “If we didn’t have her as early as we did, we would have made some regrettable decisions.”

The Hancock Park, Los Angeles, home the couple purchased in 2016 was steeped in history, and while much of the exterior could not be altered (any updates to the 1930s facade were subject to review by a local council—moving a window an inch was off-limits), almost everyone involved in the renovation wanted to modernize the interior. Almost. Reyes advocated for keeping many of the original details in the front half of the house, like the moldings around the dining room ceiling and the ornate iron balusters in the front hall. Luckily, the Foleys were all for honoring the architecture. “Which I love and always look for in clients,” says Reyes.

In her dream scenario, there would be a round table in the middle of the foyer with an oversize vase stocked with flowers—“a quintessential entryway,” Reyes notes. But there simply wasn’t enough wiggle room, so she had to nix her original plan and work with its curved walls. She asked local furniture maker Taidgh O’Neill to build a custom oak floating shelf for the corner, that way the couple and their two daughters, Ella (19) and Dylan (16), have a place to drop their keys or phones when they walk through the door. On the opposite wall, the designer displayed a series of nutshell ankle shakers that a few local women had shown Jennifer and Mike on a trip to Zambia (they met standing outside of their hotel during a middle-of-the-night fire drill). “Liza had the brilliant idea to hang them on wood hooks, sparking a terrific memory of our travels each time we pass them in our front hall,” says Jennifer.

Even though a console was out of the picture, Reyes sought to fill the open area with a bespoke rug by Mexico-based company Mestiz. And much like how Reyes’s clients trusted her, she put her faith in its creator, Daniel Valero, to make a piece for the space with little input. “They give you little color proofs to pick out and a concept photo (in our case, it was a bird), and all you get to say is yes, do it,” explains Reyes.

Working alongside architect Daniel Rodriguez, Reyes had her own vision for the kitchen. There are a number of things she asks for in every project—“I always have some pretty strict rules,” she says—like covering the dishwasher and pull-out trash can in panels so they blend in with the rest of the white oak cabinetry, and incorporating storage for cookbooks in the island. The decision to put the stove in the central structure, however, was all for Mike—the main cook in the house.

“He really wanted to look out at everyone, so we flanked it with drawers for utensils and pots and pans so they’re handy,” says Reyes. The perimeter of the kitchen is topped in one of her favorite countertop materials, pietra cardosa, a stone that is minimally sensitive to acids, so it won’t lose its sheen from an errant lemon or tomato. “I get a thrill walking into it every morning. It really shines when we’re entertaining,” says Mike.

Adding an upholstered bench underneath the window around the corner was a no-brainer: It’s the first thing you see when you walk through the front door. And while it’s a popular place to plop down with a book or lounge and scroll on your phone, Jennifer admits, “It also makes for the most wonderful laundry-folding station.”

The primary bathroom features another useful perch: The dip in the vanity was originally meant to be a place where Jennifer can sit and do her makeup, but in reality it’s just a bonus area where she can spread out her skin care (the good thing for Mike is the ledge serves as a clear divider between their two “sides”).

The gallery wall that spans from one end of the family room sectional to the other is a balance of strategy and spontaneity. After editing the family’s artwork down to a dynamic mix (you’ll spot the kids’ creations and ink works by Jennifer’s great-uncle, artist Bernhardt Crystal), Reyes created mock versions out of paper and taped them to the wall to get a sense of the layout and her maximum dimensions for the frames. “Mike and I both somehow had portraits made of us at young ages by family members. I never would have thought to put them up, but I absolutely loved our baby pictures hanging alongside the girls’ art,” shares Jennifer. “It’s essentially an art quilt of our family.”