Sara Toufali’s boho oasis is a lesson for us all. 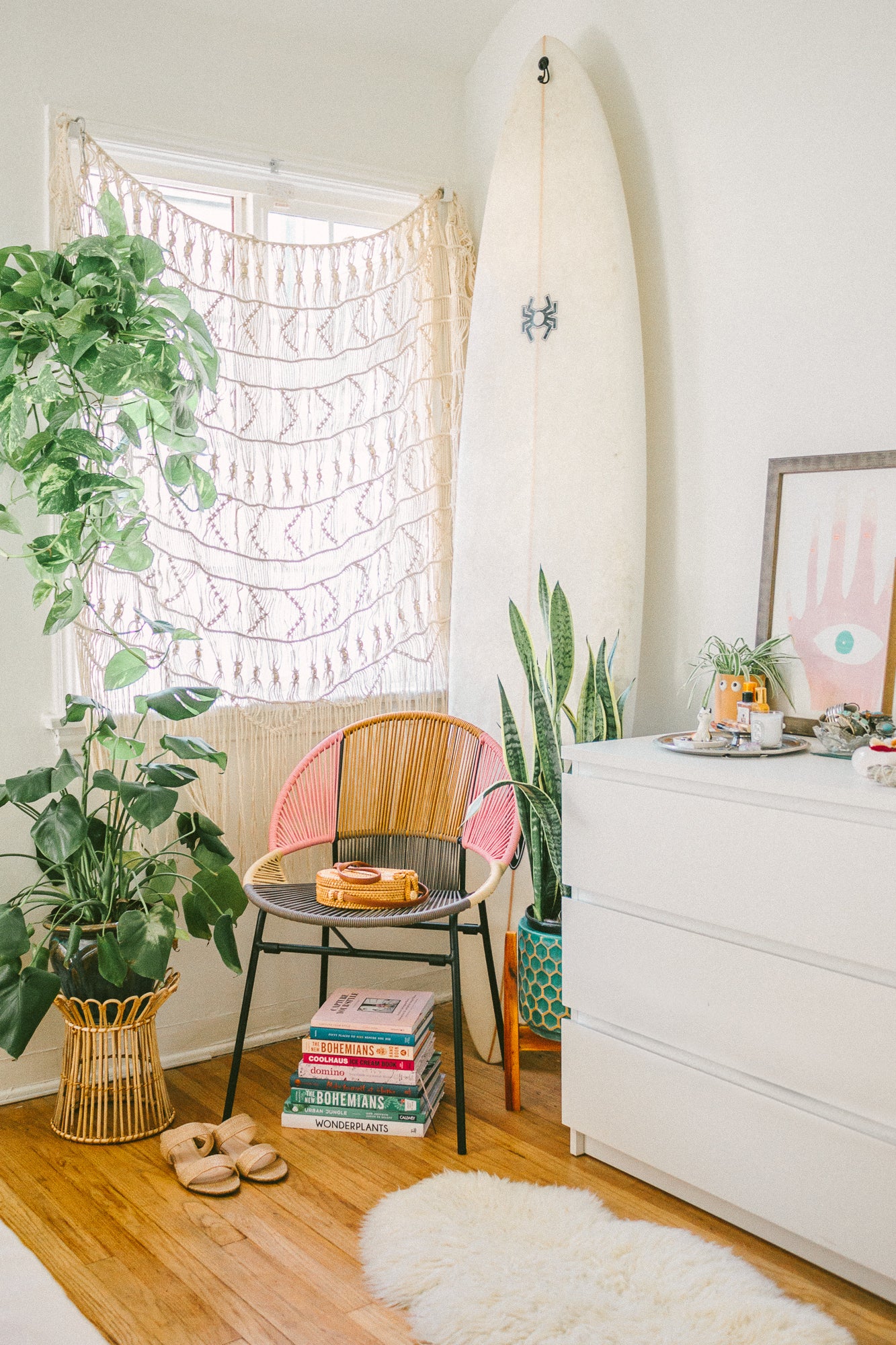 Sara Toufali might be a New York native, but she’s a Californian at heart. If her breezy, bohemian style doesn’t convince you, then her ever-growing love of greenery will.

“I grew up surrounded by plant-loving women,” says the Los Angeles–based creative behind Black and Blooms, a travel and lifestyle blog–cum–print shop. “It wasn’t until I got my first apartment after college that I started getting my own. One turned into five, which turned into ten, and it just became a real passion of mine. It’s amazing how much a space can transform when you add these living green little nuggets in your home.”

Transformation is an art Toufali and her partner, Eddie Dumphy, have come to know well. As longtime renters living in a large city, they understand that picture-perfect apartments are far and few between. So when the couple stumbled upon this sun-drenched gem in Windsor Hills, they knew they’d struck gold.

“The ceilings are low, so that was a bit of an adjustment [from our previous apartment], but it’s very sweet. I like to call it the ‘hobbit house,’” laughs Toufali. “It’s a duplex, but it feels like its own little separate cottage.”

Instead of abandoning their design goals to the pages of glossy magazines and inspiration-packed Pinterest boards, the pair hacked their way to their dream home, embracing sneaky upholstery decisions and tile-sticker DIYs along the way.

“Since we’re renting, it’s not like we’re knocking down walls or making these huge changes, so we kind of had to get clever with it,” shares Toufali.

If you can’t change it, hide it

One of the very first swaps Toufali made was in the bathroom, where dreary brown tiles lined the bathtub, sink, and shower. “I knew something had to be done, but we didn’t want to put a ton of money into retiling the space,” she explains.

After doing a little digging on Etsy, Toufali discovered Bleucoin’s genius tile stickers. Suffice it to say, the peel-and-stick decals were her greatest trompe l’oeil to date. “They’ve held up!” attests Toufali. “Everyone is so surprised when I tell them that they’re stickers. They look so real.”

Elevating Ikea staples is easier than you think

Nothing is more inviting than Toufali’s dreamy cream sofa. Don’t let its deep seat and luxe-looking upholstery fool you: The sectional only looks expensive.

“It’s actually an Ikea sofa, believe it or not,” she reveals. “It’s the same dark gray sofa we had in our old apartment, but I really wanted this space to feel light and bright, and it just wasn’t working.”

To give the staple new life, Toufali worked with Comfort Works, a company that makes custom slipcovers for different Ikea sofas. “We also switched out the metal legs for pinewood ones. It feels like an entirely different sofa, but it was so easy to do.

In the process of their move last February, Toufali and Dumphy gained almost double the space. Upping their square footage game meant getting to enjoy new luxuries—like having a dining room for the very first time.

“It was so fun to start from scratch,” she shares. While Toufali isn’t one for matchy-matchy anyway, a mixed seating arrangement freed the nook of feeling too crowded. “The dining table had to be pushed toward the window or else it would block the doorway to our kitchen. Knowing it would get a little squished with chairs on that side, we went with a bench situation instead.”

Treasured collectibles and cool art pepper the home with personality, but it’s the sheer abundance of trailing greens that really give the space life.

“I love hanging them from a curtain rod or just putting them on a shelf,” says Toufali. “They get such nice indirect light in this house that they grow really quickly. Euphorbia Ammak is definitely my favorite plant, but I do love pothos and philodendron for all that drippy goodness.”

As any proud plant parent would, Toufali uses every shelf and lonely nook as an excuse to show off her budding friends. “It’s amazing what some nice styling and a lot of plants can do for a corner!” she suggests.

That said, Toufali would never sacrifice the wants and needs of her growing greens for the sake of a standout #shelfie moment.

“You have to make sure the right plant is in the right space where it’s getting the right sunlight that it likes,” she warns. “If a spot is really sunny and gets direct light, I’m always sure to not put a plant there that likes indirect light. Other than that, it’s just filling in spaces that look a little empty with some green!”

A Historic Cotton Mill Converts Into A Plant-Filled Dream Loft