This L.A. Couple Created a Nursery (for Plants and a Baby!) in Their Backyard 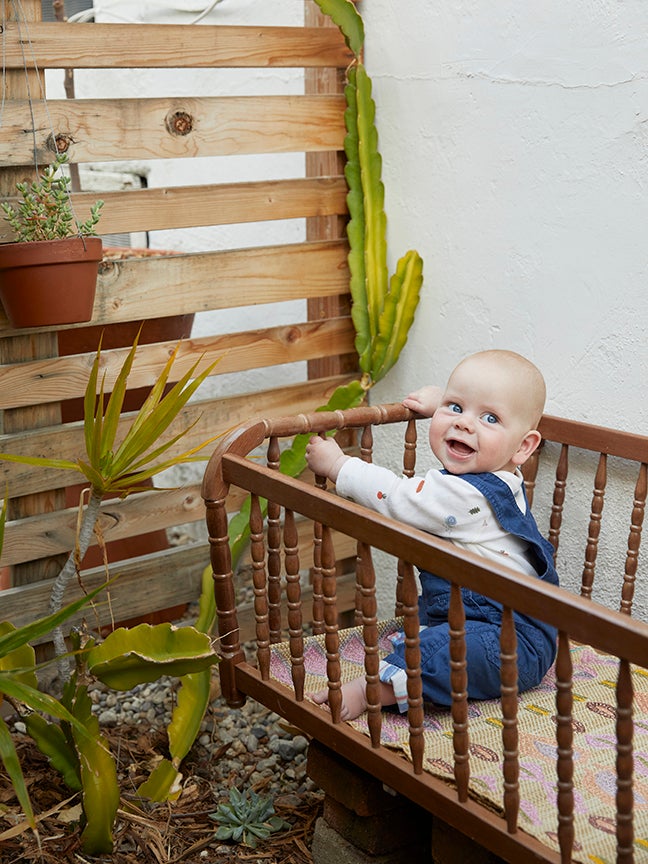 As many screenwriters do, Chiara Atik and Mark Hammer split their time between apartments in Brooklyn and Los Angeles—so they had never really known the joy of an outdoor garden before moving into their Silver Lake one-bedroom, which shares a yard with four other units. “I always liked plants, but living in New York, everything had to be in a pot or by a window,” says Hammer. The communal outdoor space in California offered him a new place to grow his dream: creating a food forest among the cacti.

So after several trips to Mimosa Nursery for fruit trees (“They started giving me deals, because they were like, Oh, this guy again,” jokes Hammer), he settled on a lemon one and a lime one. But as his knowledge of backyard orchards grew, so did his garden, where he soon started tending to a market’s worth of produce: kumquats, mangoes, strawberries, grapefruits, apricots, peaches, pomegranates, nectarines, avocados, and figs. The couple’s favorite, though, are the mulberries, a fruit that doesn’t store well (which is why you rarely see them at traditional groceries) but tastes, as Atik says, “like what you imagine a blackberry would taste like before you taste a blackberry and are kind of disappointed.”

Then last fall, the best kind of bounty arrived: their son, Tom, now 7 months old. “At first I was worried that all the plants were going to die because Mark would be indoors with me and a newborn,” says Atik. But instead the couple found a happy solution: They made their outdoor nursery a baby one, too. As if it were meant to be, they scored a crib for free from a neighbor and added it to the yard.

Turns out, putting your baby in your backyard while you garden is also ideal for a WFH lifestyle. “When Mark’s ‘on shift,’ so to speak, he will spend most of the time with Tom outside, which is great for me in terms of getting work done in a one-bedroom, but also nice because Mark gets to do something fun,” says Atik, before adding, “I just wish the baby was as into reality shows as he is being outside.”

They’ve babyproofed certain aspects, but because Tom isn’t crawling just yet, they mostly just plop him in a floor seat for a front-row view of the garden. “It’s become fun because he can hang out in there and watch what I’m doing as butterflies fly by,” says Hammer. “It’s really idyllic.”

Start Your Own (Green) Nursery