Love Tiny Houses? The Best Ones Are Waiting for You in This State

Tiny travel is the next big thing to hit the small space movement. 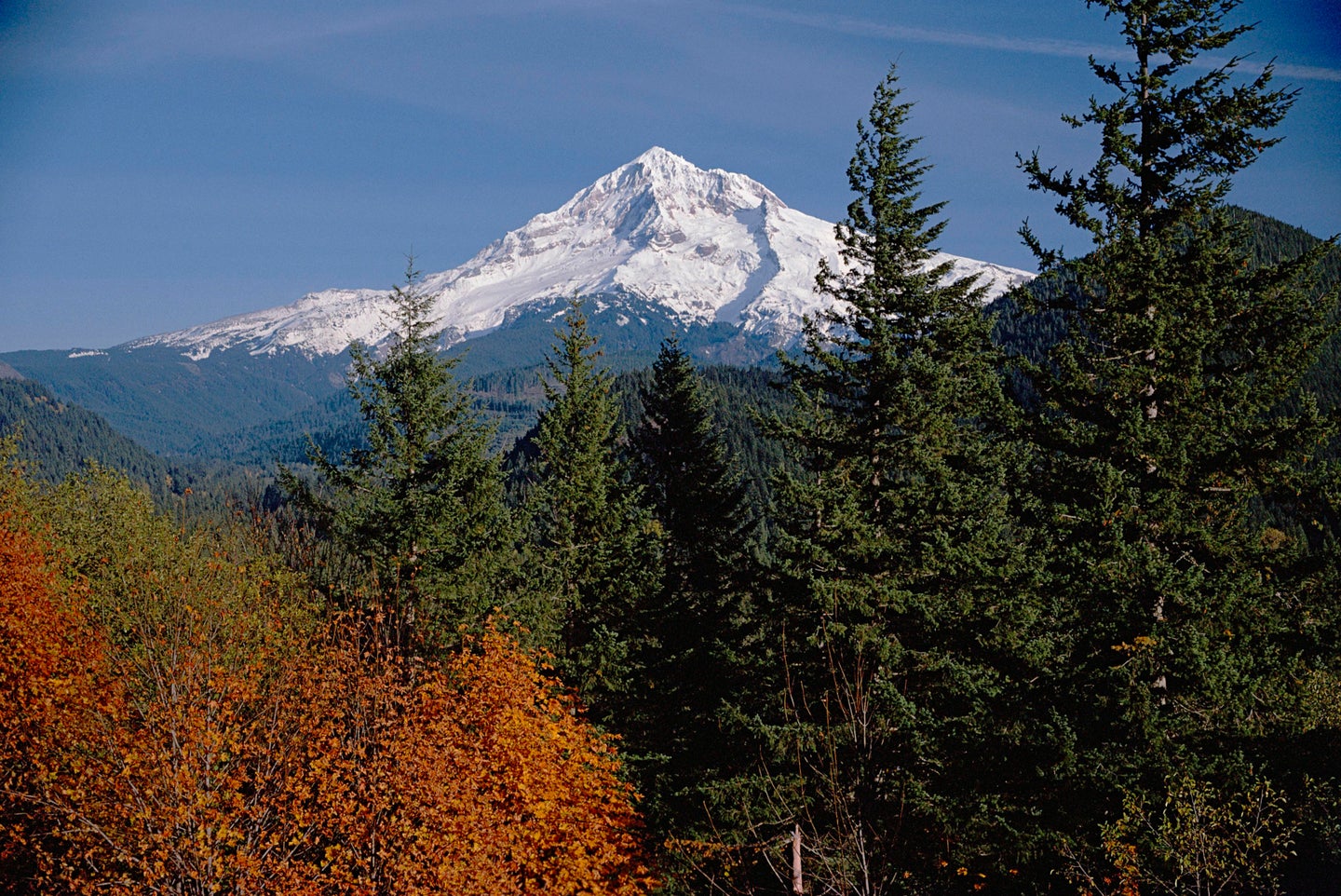 Portland, Oregon is longer just an urban mecca for the crunchy granola, eco-crazy, hipster type. There’s a new wave of travelers flocking to the city, and they’re not going for the coffee: They’re going for the tiny houses. Less than an hour’s drive outside of Portland, the community of Mt. Hood, a beloved ski destination prized for its soaring mountains and picturesque waterfalls, is going small—but, in the biggest way possible.

Nestled in the woods off US Highway 26 in Welches, Oregon sits Mt. Hood Tiny House Village, a petite collection of six teeny colorful houses. Ranging from 175 to 260-square-feet, each of the cabins comes with a unique name, story, and coordinating design aesthetic. Having long been fascinated by the unwavering staying power of tiny homes, I was excited—and slightly skeptical—to spend two nights in one of the village’s minuscule abodes this past September as a part of design-focused trip with Petite Retreats and Buick.

While the surrounding mountains, crystal clear lakes, and unadulterated Pacific Northwest landscape are the real drawing point for the area, the opportunity to temporarily indulge your wildest tiny home fantasies is now a major bonus. After parking my equally-compact, complementary 2018 Buick Encore and unpacking my meticulously arranged carry-on (this was a true test in travelling minimally), I was prepared to see what all the tiny living hype was about.

Fast forward 36 hours, and I’ve realized that living small has less to do with your organizational abilities and more to do with your sense of adventure. Ahead, a closer look at Oregon’s lesser-known locale and why it might just be the push you need to go small.

The tiny home phenomenon has taken many forms. Retro airstreams, converted shipping containers, and renovated RVs are just a few scaled-down escapes that have gained traction (and, in some cases, Instagram fame) over the past few years. That said, it’s one thing to feel an unwavering fascination for all things tiny—and it’s another to experience the spaces for yourself.

“There are so many shows on TV and so many things all over Pinterest, but most of the people who visit us have never stepped foot in a tiny home, and yet, they consider themselves to be obsessed with them,” says Annie Colletti, Marketing Director for Petite Retreat’s parent company, Equity Lifestyle Properties.

“People don’t want a cookie-cutter experience anymore. You’re not going out to a standard hotel and snapping a photo and going, ‘Look where I am.’ That’s not the type of stuff people are telling their friends about. We’re really trying to capitalize on giving an experience and tiny houses area great way to do that.”

To help match guests with the right accommodation, the company has given each of their homes a story. Spanning a mere 178 square feet, I was delighted to find that my pocket-sized retreat, Atticus, happened to be an exact (er, a close enough) personification of myself.

Sleek, modern, and slightly masculine, the cabin—which boasts a kitchen, full bathroom, two bedrooms, and a high-top dining table—has thoughtfully been described as “equally proud of his snowshoes and Murphy wingtips,” “drinks his coffee black,” and “never shies at the prospect of sleeping under the stars.” My kind of man. What’s more, though, is that these same identifying characteristics serve as inspiration for the overall decor. While my quarters took a more industrial tone with dark metals and rugged wood accents, the five surrounding cabins explore other various design styles—from modern farmhouse to boho-chic.

To help shed some light on making a tiny home feel as inviting and approachable as a life-size abode, Portland-based interior designer and small space expert Brittainy Tiffany of Tiffany Home Design (who you may have spotted on HGTV’s “Tiny House Hunters”) shares her go-to takeaways for designing around a small space.

It’s a necessity. Even though my tiny house came decked out with space-savvy furnishings, built-in storage, and a lofted master “suite,” there really wasn’t room for much else. Instead of searching for comfort in stuff, I learned to find comfort in function.

“I usually tell clients that if you’re going to go down this road you’re really going to need to live within your means. What you have with you and around you should be things you want to use every day. If you only have one chair, it needs to be something that you love and that’s comfortable and [covered] in a beautiful fabric to upgrade the cushions. That’s going to be your one and only,” shares Tiffany.

While function and storage are of unparalleled importance, that doesn’t mean you should compromise on style in the process. Small doses of texture and color—be it incorporated through sculptural lighting, fun art, plants, or pillows—can have a huge impact on a tiny space. The best part? You don’t have to spend nearly as much on the splurge-worthy features as you would be you living an ordinary life in a 2,000-something-square-foot house.

“Often times, people get priced out of the marketplace with beautiful custom tiles for flooring, but when you’re talking about a couple hundred square feet, you can really splurge on those beautiful custom pieces because you don’t need as much,” shares the designer. “That’s where people can elevate the space.”

“What you have with you and around you should be things you want to use every day.”

Along with having to descend and ascend a tiny ladder in the darkness of the night to make my way down to the bathroom, the hardest factor to grapple with was the pint-sized bathroom. With little wiggle room to shower and a barely-there medicine cabinet for storage, I found myself reverting to the kitchen counters for extra prep space. Soon, other living spaces and surfaces took on shared meaning.

“One of the challenges with trying to design these spaces is the overall storage. You really have to get creative. Every inch counts,” suggests Tiffany. “For instance, if you have a kitchen area with a table then maybe you want the seating to be a built-in bench that then opens up for extra storage. Every aspect of that space needs to be functional.”

The best part of being in a tiny house is not being in the tiny house.

Okay, this is somewhat of a contradiction, but hear me out: Without the distraction of a cushy living room sectional, wide screen TV, or luxurious claw-foot tub, you end up focusing more on doing and seeing rather than hiding out in your suite and milking every last amenity (which, truth be told, I’ve wasted a handful of vacations doing exactly that). When dropped in the right location—be it the mountains of Oregon, the Texas desert, or the coast of Maine—you’ll spend a lot more time exploring than, say, binge-watching Season 3 of “Keeping Up With the Kardashians.”

“There are so many options now in how people work and how they make a living—they don’t need to be in a particular space anymore,” says Tiffany of the changing climate around tiny living. “You have a lot of young families that are homeschooling but don’t want to spend on a large home. You have families that have some space they want to offset on their property with an Airbnb. You have families with a special needs child that can’t be fully independent, but this will give them that independent feel. I do think that it’s on trend right now, but I also think, for a lot of different reasons, [these homes] have staying power.”

Ready to travel tiny? Here are a few must-see destinations in the area:

For One Night: Bridal Veil Lodge

Located just 30 minutes outside of Portland and PDX International Airport, opt for a brief pit stop at this gem of a B&B on your way to or from the mountains. Built in 1927, the historic lodge, which sits nestled alongside Bridal Veil Falls, has recently undergone an elevated makeover (think, mid-century-inspired furnishings, cozy sheepskin throws, and Turkish terry cloth towels). Along with the main house, there’s also a two-room cottage out back for guests to spend the night. Framed by dramatic paned windows and soaring skylights, you’ll feel like you’re sleeping directly beneath the canopy of trees. Use this second opportunity to disconnect from social media and take a stroll down the hill to the waterfall.

This spot should look eerily familiar to horror fans. While Timberline Lodge has long been a refuge for serious skiers, the hotel, which sits high on Mt. Hood, is also widely known for its debut in Stanley Kubrick’s The Shining. While the interior of the lodge wasn’t used for the film, it might as well have been. Even if you only go for 20 minutes to bask in the nostalgic grandeur and sip on hot cocoa by an open fire, the winding drive up the mountain is worth the trek alone.

Take a quick two-minute drive down the road from the Tiny House Village and you’ll discover this adorable sake spot snuggled within the safety of two towering trees. If traditional mountain fare isn’t your cup of tea, fill up with sushi, udon noodles, and Japanese beer. While snowfall and sake make for noteworthy ambiance in the wintertime, come summer, the passerby can relax out back beneath string lights and huddle up in a hammock.

Tip: Koya Kitchen also has a food truck on the grounds for takeout if you’re passing through on the fly!

Of all the awe-inspiring sights to see along the Columbia River Gorge, from Mount Hood to Beacon Rock, Multnomah Falls might just be the most impressive. The iconic two-tiered waterfall plummets 620 feet—and you can observe (and capture) the cascading action from a nearby footbridge.

6 Cozy Cabins That Will Inspire a Winter Getaway

The Alpine Village Where the Royals Spend Their Winters