For starters, it’s got AC. 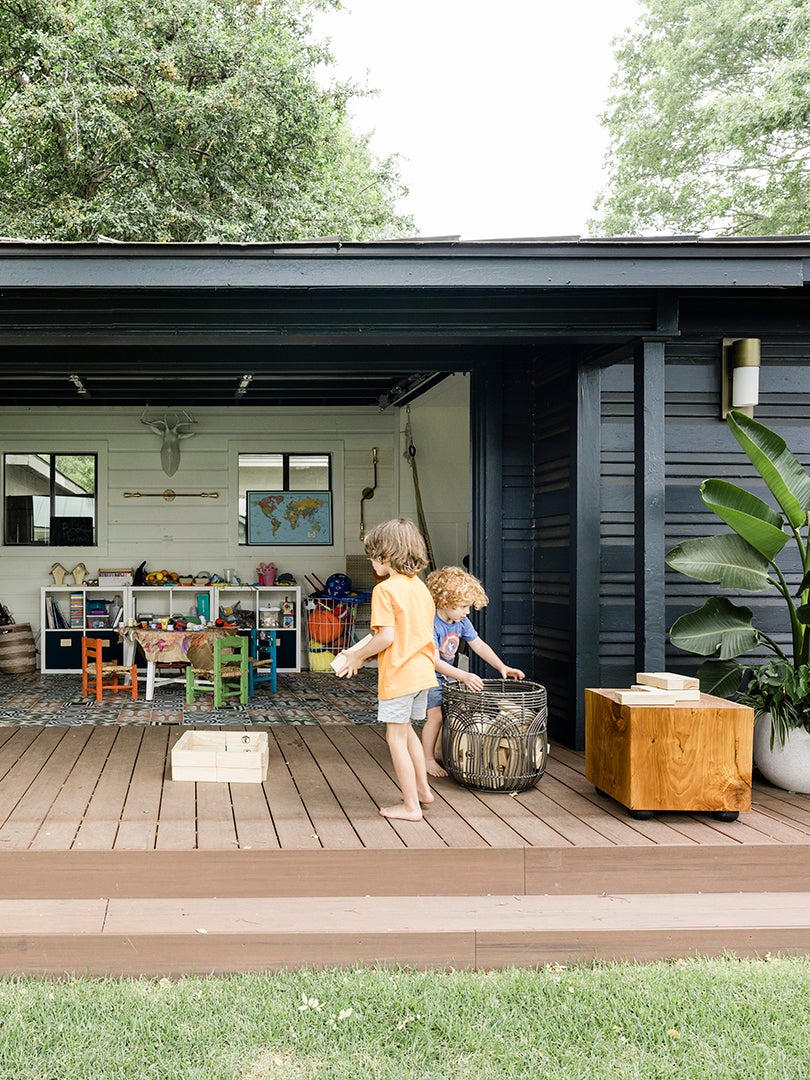 Typically, it’s a structural beam or a bit of mold that brings a project to a halt. But as HGTV designer Kim Wolfe recently learned, sometimes it is one’s maternal instinct that prevents a remodel from moving forward. Her latest clients, a couple (both doctors) with four kids under the age of 9, work so hard that, when they’re home, they want to make sure their little ones are having a blast. “As I tried to talk to the wife about the living room and dining room, she couldn’t even entertain any of it until we figured out something for the kids,” Wolfe shares. The order in which Wolfe had planned to approach fixing up their San Antonio, Texas, home would have to change.

The home’s compound-like layout was what sold the couple on the house in the first place. In addition to a casita, there’s another “out building,” as Wolfe calls it, which they were essentially using as a catchall for shed tools and occasionally a play space. “But it didn’t have AC, which in Texas, when it’s 108 degrees, is not somewhere you feel good about your kids spending time,” says the designer. Ahead, Wolfe reveals how they transformed the backyard structure into a space fit for building blocks, chalk art, and science experiments.

To make room for a substantial play zone, Wolfe shifted one of the building’s walls, still leaving enough space for a garden shed that can house the family’s lawn mower and other gardening tools on the other side. Installing a mini split for air-conditioning (no ductwork required!) was a must, as was adding a see-through garage door that can easily be rolled up so that Mom and Dad can keep an eye on things from the house.

Be Flexible With Your Flooring

Wolfe likes to keep her tile shopping as seamless and affordable as possible. She went to Clay Imports, asked what was ready and available to take home, and walked away with a dynamic patchwork of graphic squares. “It doesn’t all have to match,” she insists. The ceramic pieces help keep the space cool—and can be cleaned with a garden hose when mud and dirt inevitably make its way inside.

Provide Them With a Cozy Cocoon

Because the heat can get overwhelming, Wolfe knew she couldn’t hang up a kid-size hammock outside. Instead she hung one in this shaded, air-conditioned corner, mounting the hooks into the ceiling beam so it can withstand an energetic 7-year-old (or two) swinging inside.

Double Down on Storage That Works for Them (and You)

When Wolfe first stepped on the scene, the couple’s two daughters and two sons were pinning up their feathers and drawings directly on the walls. The designer didn’t want to change their artistic vision, but in an effort to protect the fresh coat of white paint, she bought four pegboards from IKEA (one for each child in the family) that offer them a damage-free way to display their creations. Another purchase from the Swedish brand: two Kallax units, which Wolfe loaded up with large cube-shaped bins that make corralling figurines and game pieces a breeze.

“I think giving kids their corner of the kingdom—where they can be messy, where they can explore, and where they can play—is important. I do feel that kids need a space to do that,” says Wolfe. And with the youngsters occupied outside, she got the green light to start designing for the adults.