Overhead, a stripy ceiling takes the place of a mobile. 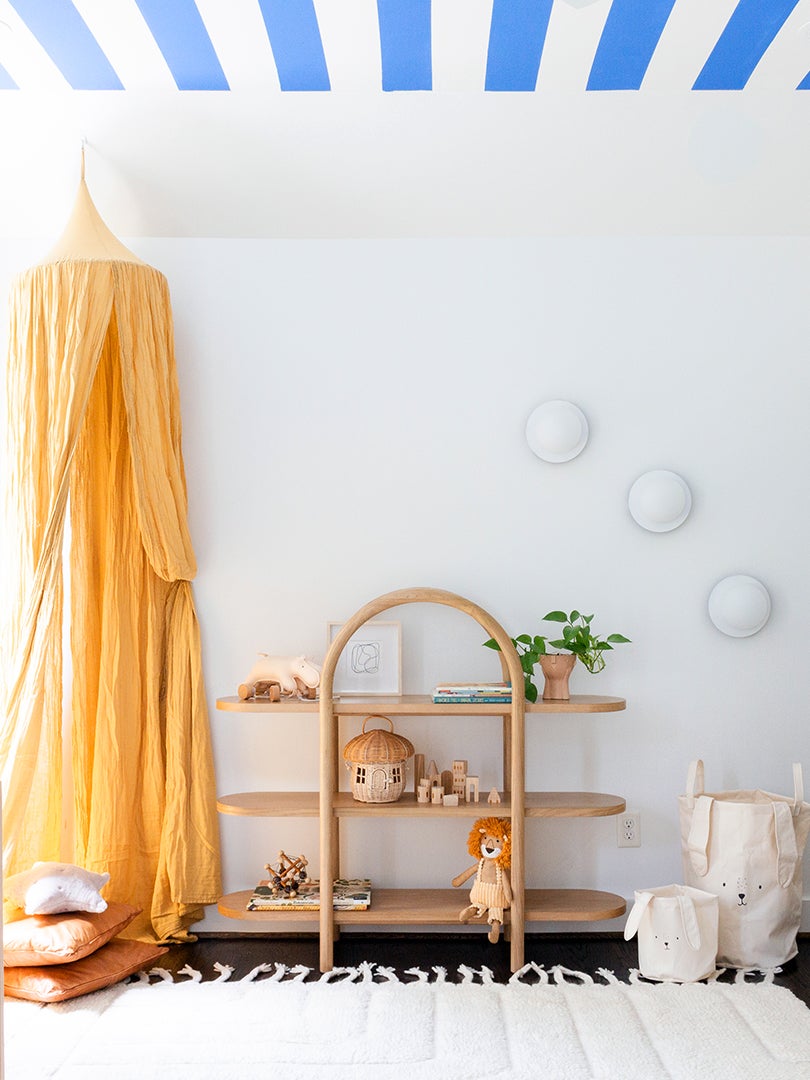 By the time Kayla Jacks, the designer behind The Self and Space, received the happy news that she’d be working on a nursery for her longtime clients, Helen Fu and Alvin Chang, she had already helped them overhaul 75 percent of their Houston home. In other words, the couple wasn’t afraid to hand over the design reins on this one. “We let her have a lot of creative freedom for the nursery,” Fu explains.

So Jacks moved ahead confidently with her concept: “superminimal, but with lots of pops of color.” At first, Fu was hesitant to go bold, reasoning that most of the nurseries she’d seen lately featured soothing, muted hues. But ultimately, Fu trusts Jacks. And when Jacks is right, she’s right. Over the years, whenever Jacks nailed a detail that Fu wasn’t originally sure of, she’d bake the designer a conciliatory cake. “She had to bake me several cakes,” Jacks admits with a laugh. Luckily, the room’s most striking element, a royal blue–and–white–striped ceiling, didn’t take too much convincing. Read on to learn all the clever ways Jacks pulled the design together.

“Stripes are something that we used consistently throughout the entire home,” says Jacks. “But in the nursery, I wanted to do it in a way where it emphasized the tray ceiling, so it’s the first thing that you see when you walk into the room.” The eye-catching pattern, in a royal blue to match the knobs on the dresser from Domino’s 2021 Crate & Kids collaboration, also stands in as a not-so-mobile mobile that Baby Chang loves to look up at while lying in his crib.

Jacks had the cool, curvy crib headboard custom-made in a polka-dot performance linen. It visually grounds the furniture in the center of the room right now, but she made sure the width will perfectly match that of a standard full mattress for down the road.

For the alcove that leads to the closet, Jacks hired a true pro to line up the robot wallpaper perfectly so that it looks like one of the robots controls the light switch and the outlets are part of the robots’ backpacks. “Little details matter,” Fu says. “Every time I walk into the room, it’s hard not to smile.”

While the room is decidedly not Technicolor, Jacks did pull inspiration from the rainbow for the arched sconce placement. “We wanted it to feel like the end of a rainbow—magically delicious!” says Jacks. (Psst: The lighting placement also plays off of the shape of the bookcase.)

One of Chang’s favorite aspects of the room is the art above the changing table. The tennis print is actually a towel from West Elm Velcro-ed around a simple curtain rod—a perfectly washable statement piece (just in case a diaper change goes haywire).

Because the baby was born in the Year of the Tiger, Jacks brought in some “really brilliant orange tones,” like the canopy for the reading nook, which is great for tummy time now but works for imaginative play and story time later. “Alvin is the Year of the Rabbit and Helen is the Year of the Monkey,” Jacks says, pointing out the bunny toy storage baskets and art prints hung next to the rocker. “We wanted to incorporate fun little nods to them throughout the room.”