A case for not having a dedicated changing table.

By
Lydia Geisel
photography by
Harlow and May Studios 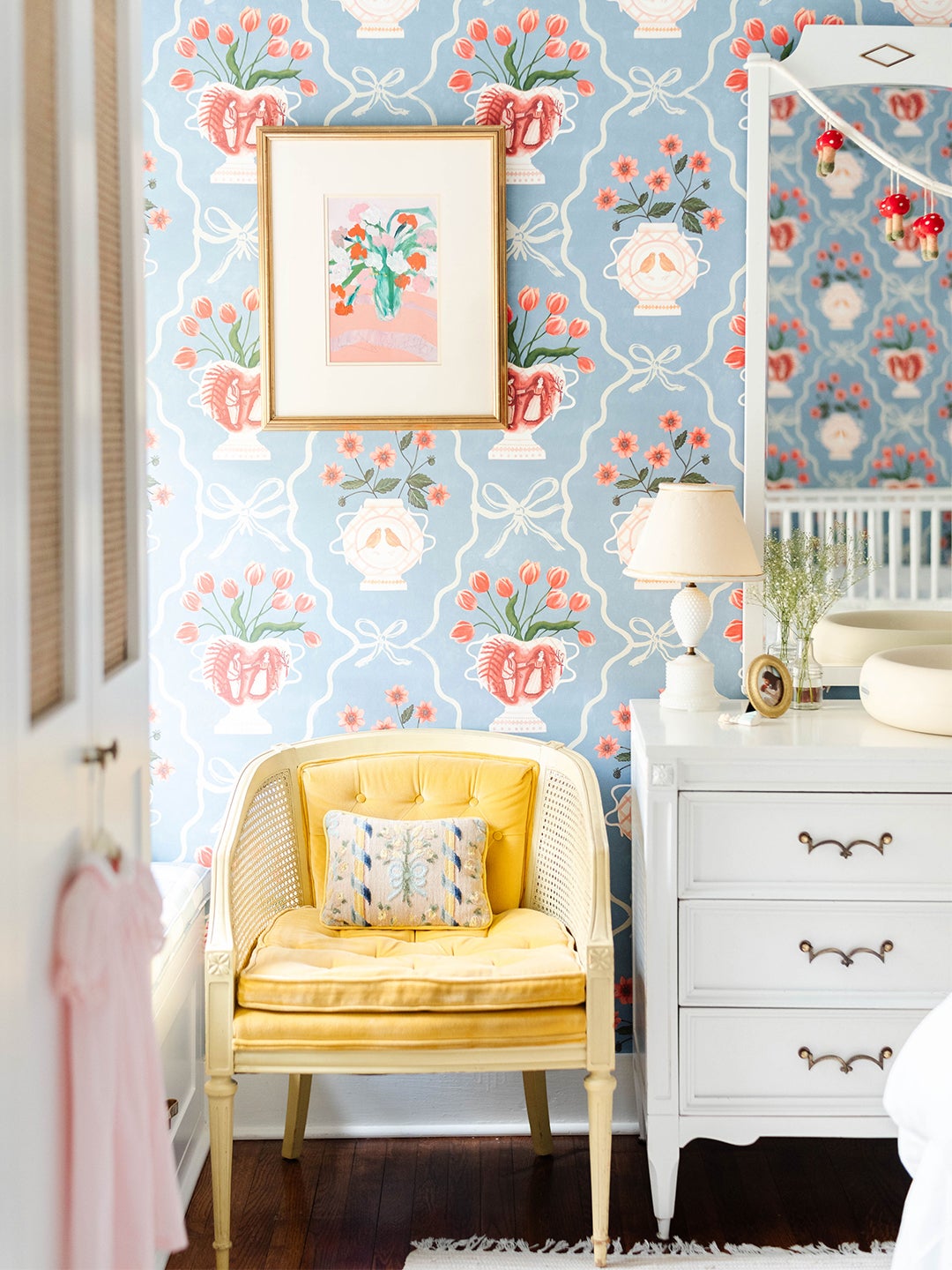 Walls lined with antique plates, lampshades with scalloped edges, and gingham-patterned pillows are a few of the reasons we’ve all become obsessed with British interiors over the past two years. But for Anglo(design)phile Kathryn Humphries, it’s much simpler than that. “It’s the emphasis on things that are old,” suggests Humphries, the Houston-based cofounder of All You Need Method, an online course and consultancy platform for small-business owners. “They honor things that have been passed down.” That coveted lived-in feeling was what she sought to achieve when designing her now 10-month-old daughter Annie’s nursery, a space currently filled with vintage pieces and accessories that once belonged to Humphries’s grandmother (like a sunny yellow armchair) and small relics from when she lived in New York City.

But to really drive home the across-the-pond aesthetic, Humphries sourced pieces from her favorite British designers. The hardware on the built-in drawers and the jumbo check fabric on the bench cushions are by Beata Heuman, while the coordinating blue and red wallpaper that covers three of the four walls is from Norfolk-based illustrator Polly Fern. In here, you’d never know you were in Texas.

Given the house was built in the 1930s, it didn’t come with a whole lot of storage, so Humphries had to devise a floor-to-ceiling wardrobe system from scratch. “I personally had always dreamed of having window seats in my own bedroom as a kid,” shares Humphries of her decision to add seating nooks to the plans. After drawing it up herself, her husband’s family, who is in the construction business, built the structure, adding cane detailing to the closet doors, a feature subconsciously inspired by Matilda Goad’s London home.

The main closets hold all of Annie’s hanging clothes, with a section just for coats and jackets and her extra toiletries. In the harder-to-reach cabinets at the top, Humphries has stowed away the clothes her daughter has yet to grow into.

You’d think a crib that’s from a company called DaVinci would be a big investment, but the Jenny Lind 3-in-1 piece Annie sleeps soundly in cost only $230. Humphries saved in more ways by forgoing a traditional changing table for a dresser she had in her own room growing up (the nightstands and mirror came with it in a set). The garland that now hangs over the vanity area was an addition Humphries bought over the holidays but decided to keep around because Annie is a fan. “She loves to look up at the mushrooms and tug on them,” she says.

As the story goes with most nurseries, this one started out as a guest room. The big difference is, it’s still very much just that (hence the full-size bed). “We love having friends and family come to stay, and I wanted to have a place where they could spend the night,” says Humphries. They’ve hosted plenty since Annie was born: When guests arrive, the couple sets up a pack-and-play in their space, removes the changing pad from the dresser, puts out a water decanter on the nightstand, and—voilà!—it’s ready for adults. “It’s a pretty easy transition,” she notes. Come little one, come all.