11 Ways to Hide Your TV in Plain Sight

Including two uses for a drop cloth. 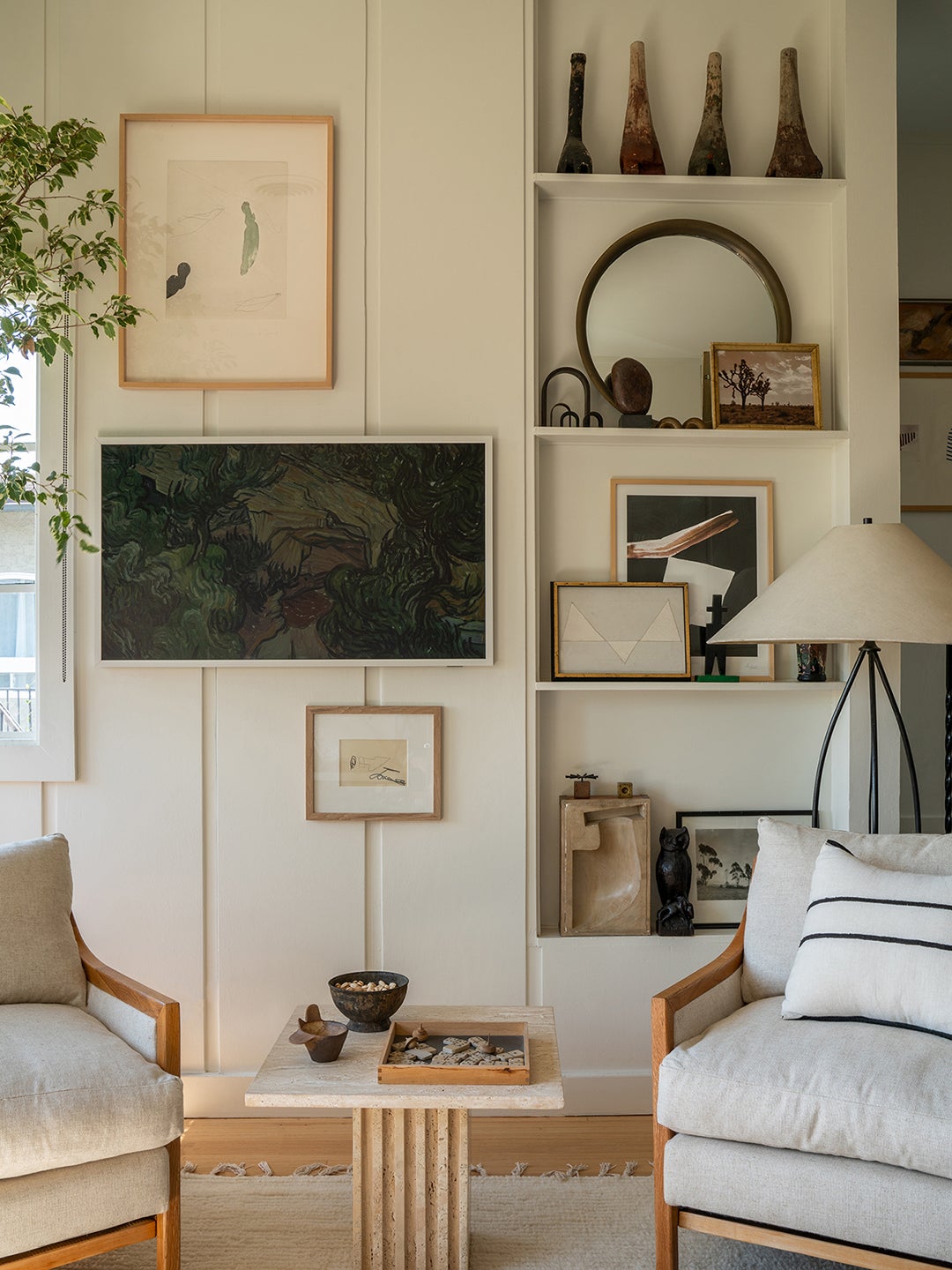 “Televisions are a necessary evil for interior designers,” says Christina Valencia, one half of the husband-and-wife studio Colossus Mfg. Most of their clients want to have one in their living space, but the practical place for it always seems to be right in the middle of the room. The result? When you’re not streaming The White Lotus or hosting Super Bowl Sunday, you’re left looking at a big black box. No matter how cool your media console or how chic your sectional, no amount of style can completely turn your head from the eyesore. Fortunately, this all-too-common dilemma has forced designers to get creative with temporarily disguising the tricky tech when it’s powered off, and surprisingly most of their solutions are easy to DIY. Here’s how to hide your TV, 11 different ways.

Pulp Design Studios made a clever hideaway for a client’s rarely used television by setting the screen into the wall and adding “doors” on either side. When closed, all guests see are six works of art in matching frames.

Valencia and her husband, Kele Dobrinski, took a similar approach by putting the TV in Dobrinski’s parents’ home in a cabinet. Rather than hunting down prints at an antiques shop, though, they painted an abstract landscape onto the facade.

Shroud It With Scrap Textiles

Designer Alex Boudreau happens to have a “ridiculous collection” of 1-yard fabric samples, so when she feels like hiding her eye-level, wall-mounted TV, she just throws her favorite one of the month over it.

Put an Old Rug to Use

Often the only logical place to situate the tech is directly over the fireplace—a no-no in the design world, as it takes away from the gathering and conversing that a roaring fire encourages. That’s why Los Angeles–based creative director, stylist, and photographer Kristin Guy was determined to mask hers with a five-minute DIY that calls for a flat-weave rug, a dowel, and a couple of sturdy hooks.

Lean It on an Easel

New York designer Crystal Sinclair decided to leave her client’s Frame TV out in the open in her Brooklyn loft—but by positioning it on an antique easel instead of a traditional media console, it takes on the role of art rather than atrocity. Wright will fool people into thinking it’s a real painting by throwing on a screen saver, as is intended with the Samsung product.

Mix the Frame TV Into a Gallery Wall

Another smart way to make the most of the Frame TV: Work it into a gallery wall like interior stylist Scott Horne did in his L.A. living room. The original wide wall paneling (now painted in Benjamin Moore’s White Dove) adds a layer of dimension that further helps the 3D box blend into the background.

Shield It With a Drop Cloth, Two Ways

DIYer and blogger Emily Brownell took a drop cloth outside, primed it, and painted abstract shapes on the canvas using leftover sample jars and oil pastels she had lying around her house. The large-scale tapestry now hangs from a dowel that’s mounted to the ceiling in her garage-turned-den. When it’s movie night, all the family has to do is lift the fabric and push it behind the TV.

Seeking Lavender Lane blogger Deb Foglia not only needed to hide her screen but the unsightly cable box and cords attached to it. So after mounting it all on the only blank wall in her space, she screwed a curtain rod into the ceiling, popped on two rings, and finished off the disguise with a 9-by-12-foot drop cloth.

Take a Moment to Reflect

Things get even trickier when you’re trying to obscure a television in a room where you usually don’t expect to see one. Following her client’s request for a secret screen in the dining room, designer Maggie Burns opted for a Reflectel, a custom framed TV that, when turned off, is concealed by mirror glass.

Go Big When You Go Home

If a discreet home theater is what you’re after, take a cue from Emily Henderson and install a projector with a simple white cartridge (hers is mounted on the ceiling above her sofa) and a pull-down screen (located above the window). All the cords are hidden behind the shades or within white cord covers that her installer snaked down the middle of the windows.

Think: What Would James Bond Do?

After realizing this apartment only had one wall available for artwork, designer Charlotte Sylvain of Studio Fauve decided to position the TV in the middle of the room. The custom floating dining banquette–meets–media console comes with a remote-controlled lift that conceals (or reveals) the flat screen at the touch of a button.