The view: Tiled columns, a huge chandelier, and a TV on an easel. 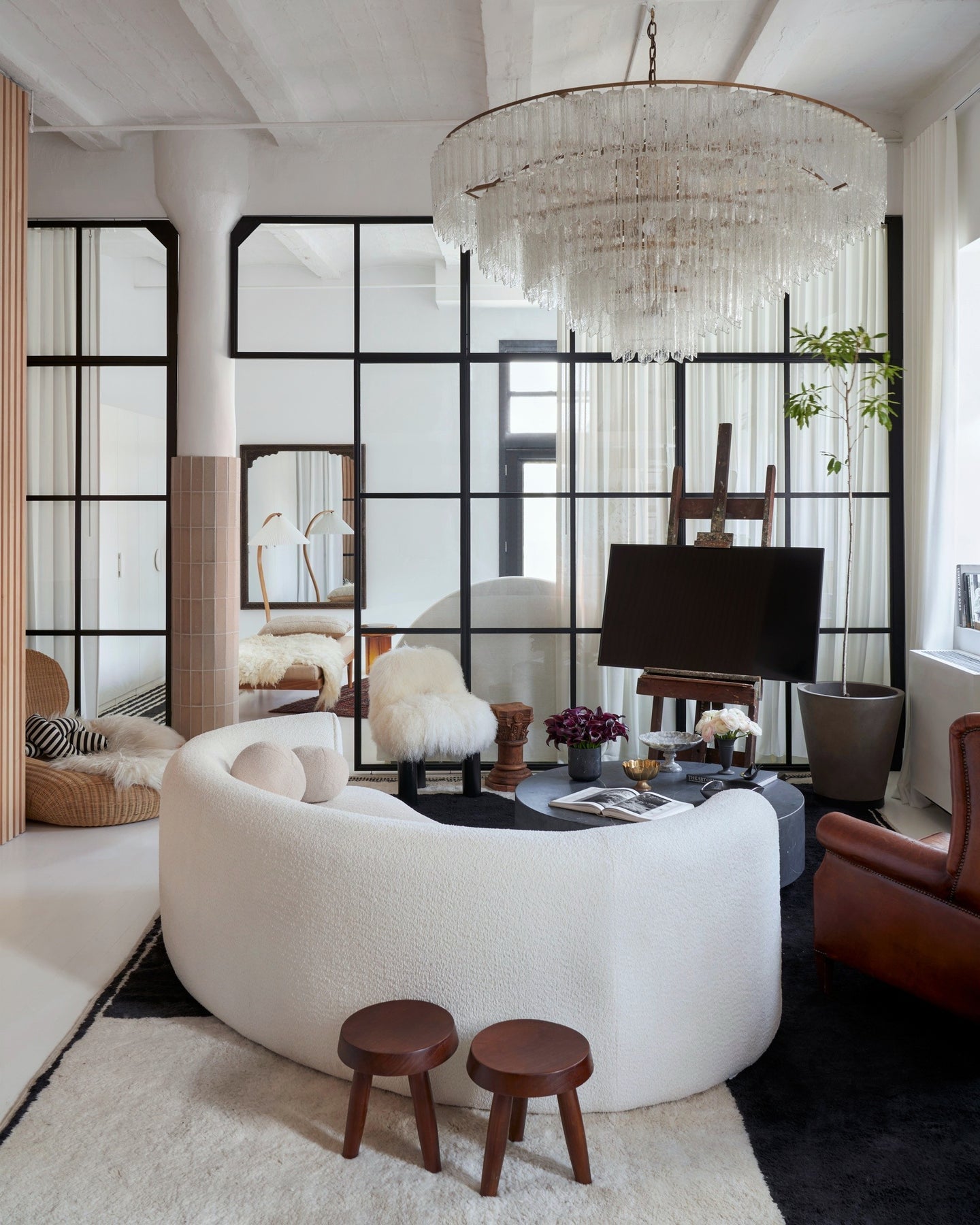 If you had to guess Jessica Wright’s job just by looking at her Dumbo, Brooklyn, loft, you’d assume she’s an artist. Her hardwood floors are painted a crisp shade of white, a nearly 14-foot-tall glass and steel wall floods her bedroom with light, and her TV is positioned on an antique easel instead of a traditional media console. In reality, she’s an associate at a law firm, focusing on commercial litigation, antitrust, and international human rights—and on top of that, writes personal and political essays. But an artist’s loft is what her interior designer, Crystal Sinclair, envisioned the first time she stepped into the 1,190-square-foot space back in 2020. Wright, who at the time was renting a place in a mid-rise building in Williamsburg, saw the chance to create her dream European apartment Stateside (she lived in Berlin and Paris, as well as Delhi, before moving to London for graduate school, and later Kabul). “Paris has had the biggest influence on me. I love the design, the buildings, the clothes, everything,” shares Wright.

Although the space, nestled in a former warehouse for Kirkman and Son Soap Company, had been on the market for only two days when Wright toured it, there were already 15 applications. “The exterior of the building was featured in a TikTok because I think it was used as a facade in Gossip Girl, so that garnered more attention,” she says. It was luck and a personal letter that ultimately helped her stand out. Wright’s real-estate agent, Mary Elizabeth Smith of Corcoran, advised her to share all the reasons why it was perfect for her. Her closing argument? Unlike many similar lofts in the neighborhood, she loved that this one hadn’t been reworked into a luxury rental.

Throughout the renovation, Sinclair worked with contractor Michal Cisowski of Smart Interiors to balance the space’s turn-of-the-century industrial bones with romantic touches, like wrapping the base of the large pillars in warm terracotta tile and enclosing the washer and dryer in a slatted wood structure. Most important, she wanted to offer Wright easy access to the mezzanine tucked underneath the apartment’s soaring coffered ceilings (previously there wasn’t a permanent ladder leading up to the nook).

Now the area functions as a mini library–slash–reading nook, and Wright doesn’t mind that she has to crouch down when she’s up there. “In Afghanistan, in a lot of living rooms, you sit on the floor, so I thought, oh, what a perfect place,” she says. Sinclair and Wright made the area supercozy by decking it out in Wright’s afghan rugs as well as low, cloudlike chairs from Pottery Barn Teen.

In her cover letter to the previous homeowner, Wright pointed out that the big open space below would be ideal for hosting—and it has not disappointed. Sinclair transformed the kitchen by cladding the walls, backsplash, shelving, and countertops in a honed Arabascato marble and swapping the former microwave–vent hood combo for a sleek oxidized steel shell. “We were nervous about being limited on storage, but it’s actually worked out fine: The island has drawers on the front and sides,” notes the designer.

While the 250-pound, 6-foot-wide vintage chandelier in the living room is a surefire conversation starter, guests usually express their awe when they realize the Frame TV sitting on the easel isn’t a work of art (Wright will fool people into thinking it’s a real painting by throwing on a screen saver, as is intended with the Samsung product). Sinclair opted for a curved sofa to make the most of the corner setup. “It’s like you’re on a cloud; it’s all very soft and sensual, light and airy,” she shares.

Two of Wright’s most prized possessions, a Nuristani mirror and a Qashqai rug (both purchased in Afghanistan), have pride of place in her bedroom, but so does her printer. Wright works from home four days a week, so carving out room for a desk was essential. Sinclair designed one that spans the entire wall, leaving plenty of room for a makeup station, too. “It only made sense to put it along the window so she can look outside,” says the designer. Although the view inside isn’t so bad either. 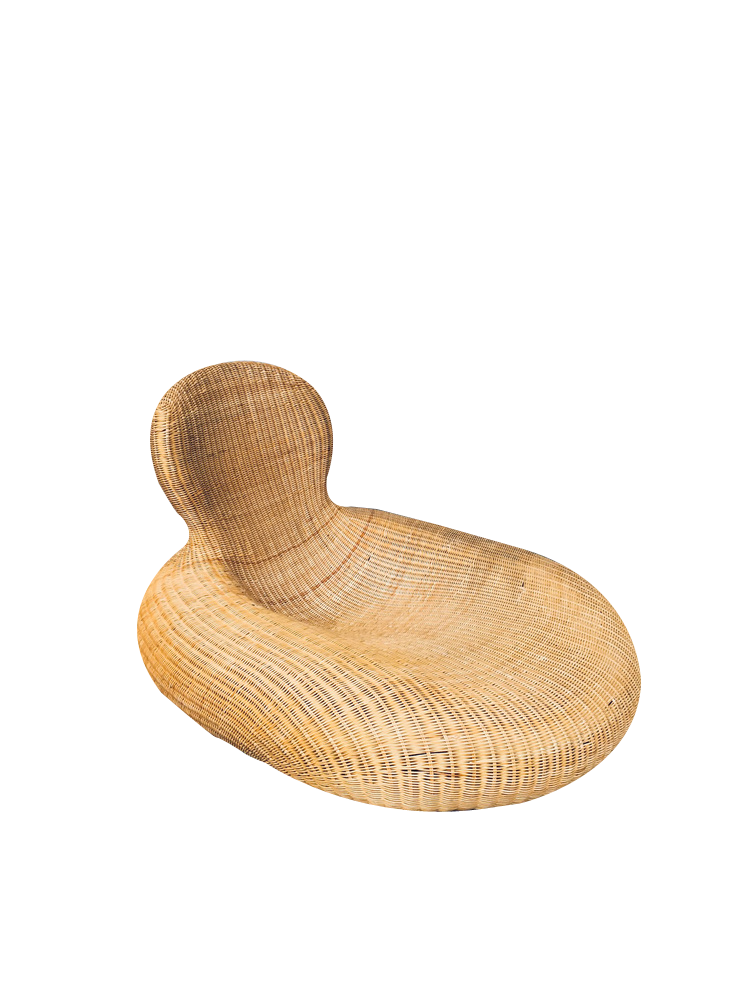 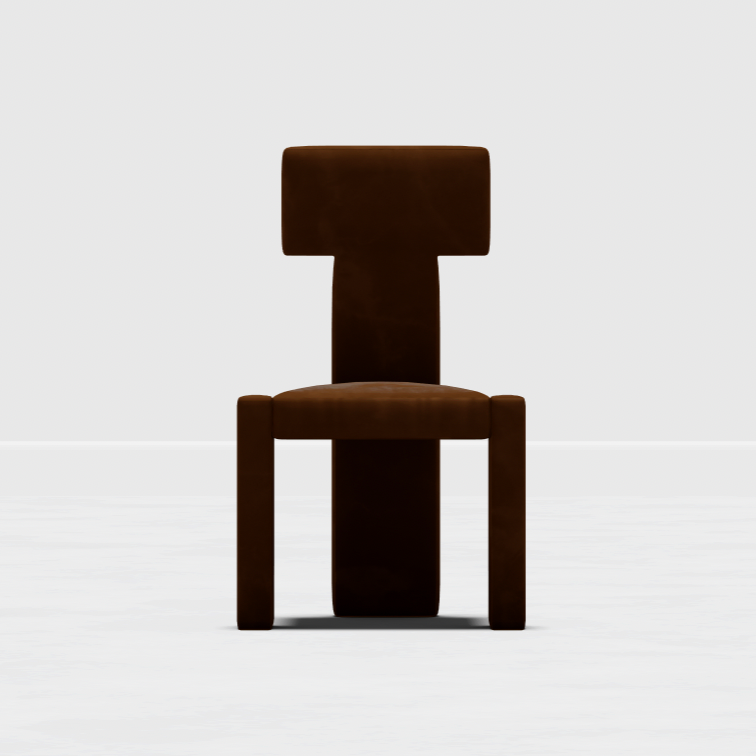