One dated Texas abode gets a dramatic makeover. 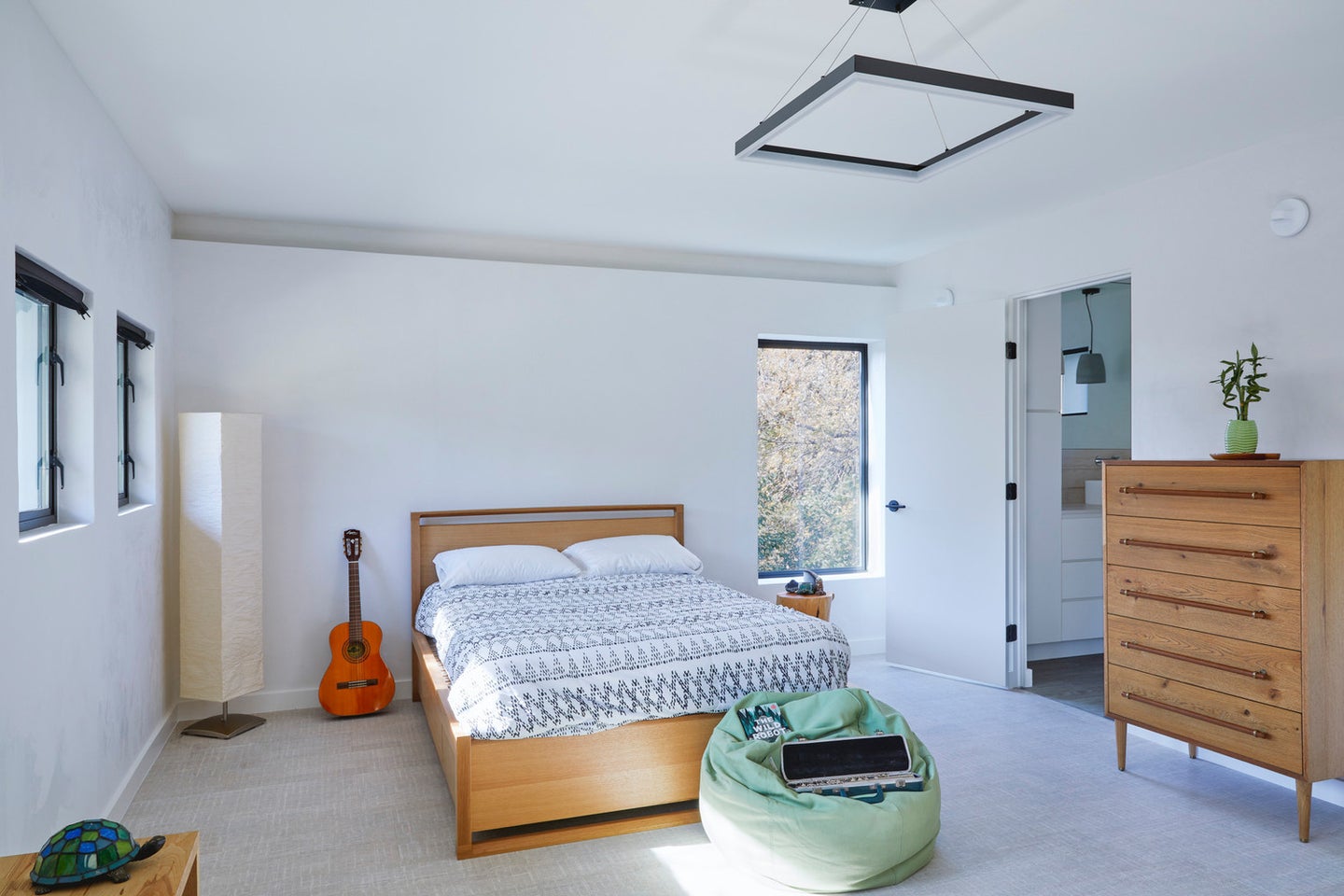 When you’re moving to an unfamiliar city, figuring out which neighborhood is the best fit for your family can be likened to a nightmarish guessing game (especially when you’re making said life-changing decision from hundreds of miles away). That’s why before Lisa Versaci and her husband, John Papola, officially made the move from NYC to Austin, TX seven years ago to launch their creative company, she took to the streets of Google Maps to scout out potential areas. Her intense web search landed them in the lush neighborhood of Barton Hills, where they’ve lived ever since.

“When it was time to buy, the market was so hot that every time we went to bid on a house we would get out bid by at least $30,000,” says Versaci on what eventually led them to take on their first fixer-upper (located a short distance away from their current home). “Although I was happy at my last property, we were considering putting in a pool and I looked at the cost of a pool and went, ‘Well, maybe we can buy a house that already has a pool!’ That’s what prompted me to find this house.”

Though the property’s sprawling backyard and large swimming pool were a major draw, the home’s dated interior was in dire need of a modern facelift. Start to finish, the renovation lasted about a year. And while most renovators might feel tempted to swath their newly-finished abode in statement wallpaper and punchy hues, here, loud prints and bold paint colors take a back seat. Call it what you want—a clean slate, blank canvas, fresh start—but the duo’s now-whitewashed Texas home is yet another reason to go monochrome.

Versaci and Papola tasked Bison Design Build with bringing the 3,000-square-foot home back down to its studs and spearheading the construction. For a year, the couple and their son, Mateo, lived in the tiny 120-square-foot pool cabana in the backyard during the remodel (well, Mateo actually stayed in a 5×7 makeshift “home” of his own: “He thought it was the coolest thing ever, of course. Being an 11-year-old kid he would brag at school that he had his own house.”)

Much to her contractor’s dismay, living on-site meant that the duo was able to check in on the progress of the project everyday. Despite the inconvenience of having their temporary kitchen located in the gazebo or housing their refrigerator in the garage, looking back, Versaci wouldn’t change a thing.

“I loved learning all the different aspects of renovating a home,” she says. Both she and her husband took a hands-on role in the reno (her husband even went so far as to take a shop-vac to the framing boards to ensure no nail had been left behind). “We were able to add an extra layer of attention and love that a contractor might not have.

Previously haunted by salmon pink everything and a less-than-ideal floor plan, the now-spacious home is a haven for natural sunlight, thanks to the imposing windows and streamlined skylights that grace almost every room. White-painted plaster walls—a mix of lim, crushed marble, and fine grain sand—complete the tranquil scene.

“I love the plaster walls so much I can barely hang a picture on them. The texture and the way that they catch the light…to me, they are better than art,” Versaci tells Domino.

Not having to pay for painting or tile work was just two of the ways Versaci justified spending more on plaster as opposed to drywall. The couple was also able to spare their budget by opting for cork floors—an ultra-soft, moisture-absorbent alternative Versaci says she now swears by—and using countertop remnants from a local stone yard for the master bath. All in all, they were able to renovate their home for $150 per square foot, despite their pricier swap.

“It ended up being the most cost-effective, expensive thing you could possibly do!” she laughs. “There are so many incredible reasons to choose a plaster finish on your wall. If you can find the right subtractor who knows what they’re doing, it’s a joy to have it in your home.”

With the exception of a teak sink in the guest bathroom, rift sawn white oak serves as the primary wood in the home.

“A lot of homes in Texas are designed to keep sun out,” says Versaci. “They’re designed for efficiency, which is great, but [there are other ways] you can achieve similar efficiency.”

To keep their utility bill from going through the roof, the couple had shades installed on the skylights to help keep the house cool. “It was really important to me—in as many rooms as possible—to have as many directions of sunlight coming in at different times of the day,” notes Versaci.

Sunlight pours into the master bathroom, where soaring 12-foot ceilings and ultra-clean lines make for a decidedly peaceful retreat. LED cove lights were installed to simulate the appearance of daylight during the evening hours.

Her number one tip before selecting bulbs? “Always check color lighting temperatures before committing to fill your with a certain warmth or coolness,” she suggests. “Even though architects and lighting shops will tell you 3000 kelvin lights are the new “modern” lighting temperature, 2700k makes a big difference and is much warmer and welcoming.”

Seeing that both Versaci and her husband spend the majority of their days in front of their screens sifting through media (the couple owns a creative agency called Emergent Order, where they produce documentary films, short film docu-series, and web videos) they, unsurprisingly, wanted their home to encourage a sense of restfulness.

“The intention behind the house was to celebrate texture, light, and peacefulness,” says Versaci.

No room promises ultimate zen quite like the master bedroom, where a semi-sculptural light fixture by Artemide Tolomeo and super chic fireplace add intrigue to the bare, yet design-focused space.

While certainly a pricier pick, the family is loving the added bonuses of living with plaster walls. Not only does it impart an extra dose of character to a space, but the breathable material also absorbs more sound than drywall and helps keep mold to a minimum.

“Having been through a renovation before this, I knew that renovated drywall is never perfect to begin with,” suggests Versaci. “So what better way to mask inconsistencies than to have this beautiful, artistic texture over it?”

If these walls could talk, they’d certainly tell you to give them a chance.

See more dramatic before and afters: