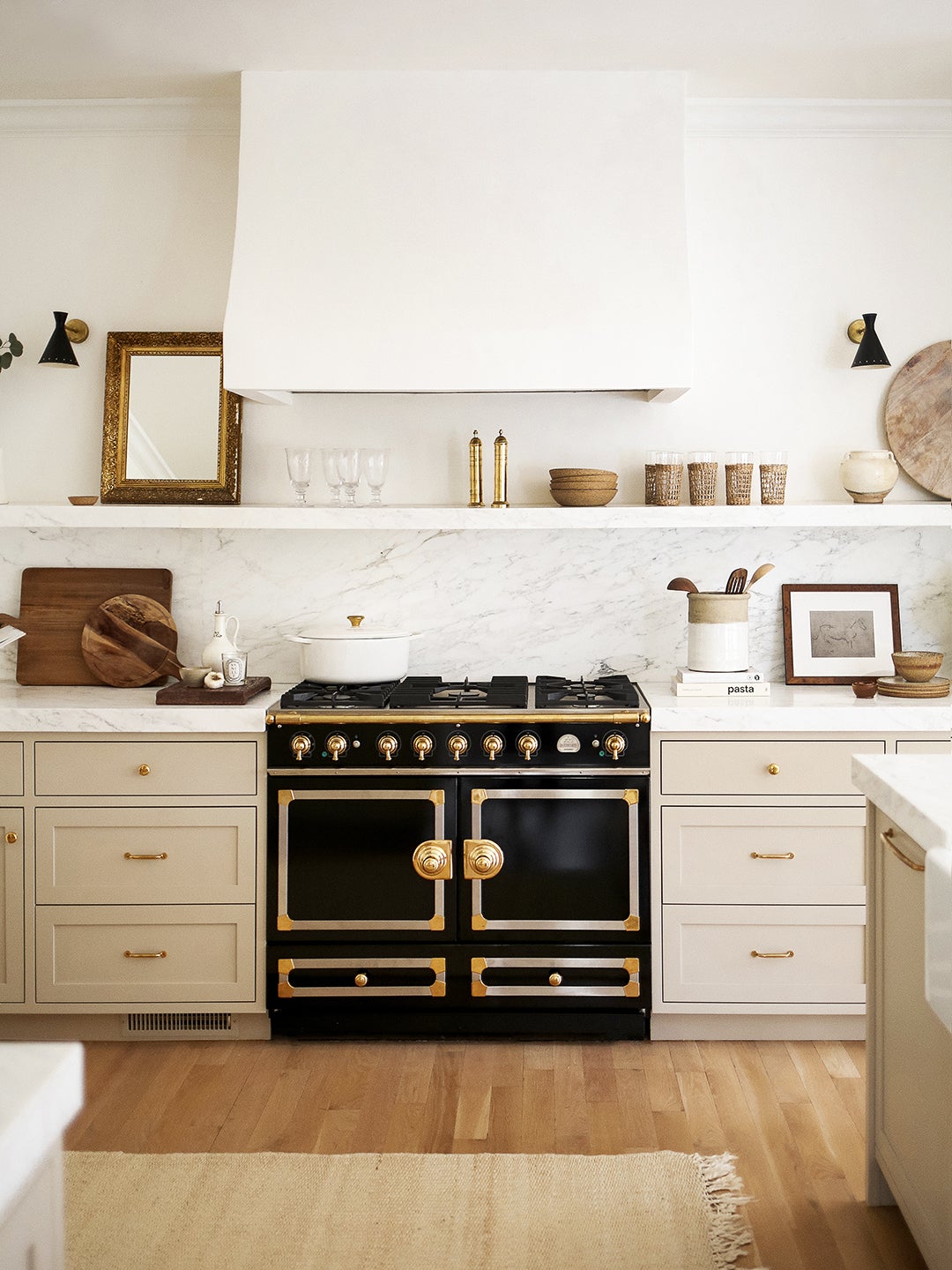 Even Kat Jamieson can admit the kitchen in her Connecticut home was perfectly fine when she and her husband, Thomas, left their New York City apartment and bought the place a year and a half ago. But perfectly fine didn’t mean perfect for her. “We were very lucky; the house is only 11 years old,” says Kat, the founder of With Love From Kat, a lifestyle website and Instagram account where she posts about fashion, decor, travel, beauty, and more. The 186-square-foot space’s overall farmhouse aesthetic was right up her alley, but the white cabinets read as stark, and the decade-old stainless steel appliances were not super-functional, not to mention bulky. “I really wanted something that felt less cookie-cutter and warmer,” she explains. “Especially being a former city person now living in the suburbs, I was like, no, I can’t have this typical, sterile white kitchen.”

Fortunately, before she began her 12-plus-year blogging career, Kat earned a degree in interior design studies, so coming up with a vision for the renovation didn’t intimidate her. But when it came to figuring out the more technical, math-heavy details—like how high the backsplash should be or choosing the exact cabinet-front style—one of her Instagram followers, Charlene Miranda, an interior designer based in Brooklyn, came to her rescue with elevations and advice. “What I really appreciated about Charlene was that she was always available to help me problem-solve when things went wrong,” says Kat. “And things did go wrong.” Read on for six decisions they made that took this once boring kitchen to the next level.

Show the Door to Puny Windows

Most people would never opt for less natural light, but Kat knew a statement range and a custom Venetian plaster hood would have a stronger visual impact than a teeny window with a clunky metal microwave hanging above it. “Luckily we have so many windows and French doors nearby overlooking our back patio that there’s ample sunshine throughout the day,” she says. The splurge-worthy La Cornue range is now the first thing you see when you enter the house through the side door, and it was worth the eight-month wait—Kat has noticed a significant difference in the way it cooks food. “Even just baked chicken…it makes it crispier. I don’t know how it does it,” she says with a laugh.

Covering the new cabinetry by local maker Pro Kriss in Sherwin-Williams’s Sandbar color instantly achieved the sense of warmth Kat was after. While the hue looks taupe-y on the company’s website, in real life it takes on a soothing gray-green, almost-mushroom tone. The fresh cupboards are all the more impressive now that they extend to the top of the 9-foot-high ceilings.

Pick Your Countertop Before Your Cabinet Dimensions

With her paint swatch in hand, Kat headed off to the stone yard in search of new countertops. “We found that since our paint color was warmer, it clashed with any marble slabs that were cooler in tone or had more blue in them,” she notes. A slab of veiny Calacatta Gold marble ended up being the perfect match for Sandbar.

The challenge became selecting the right measurements for the surface. Originally, Kat accounted for a 1 1/4-inch-thick worktop, but when she ultimately decided to go with a mitered edge, she was told it would actually need to be 2 1/2 inches thick. The thing was, by that point, her cabinets were already being constructed and her range had already been ordered. Once everything was in place, she realized the stovetop was lower than the counters. “That was a major hiccup,” she recalls. Luckily Miranda was there to calm her down, and they came up with a solution to slightly raise the appliance on a platform, so you can barely tell things don’t perfectly line up.

Rather than send all of the original appliances to a dumpster, Kat and Thomas gifted them to their landscapers. Once the stainless steel refrigerator was out of the picture, they closed up a nearby hallway closet and opened it up to the kitchen so they could fit a Fisher & Paykel integrated-panel fridge in the nook. “We really worked with the existing layout and maximized it,” she notes.

As for the previous all-white marble countertops, one chunk went to the Jamiesons’ neighbor and fellow design enthusiast Shelby Girard (she was able to use the stone scraps for her fireplace). They gave another chunk to a videographer friend.

Even when Kat and Thomas lived in their small SoHo apartment with an even tinier kitchen, they never used their barstool seating. “My husband is 6-feet-4, so they’re not comfortable for him, and I didn’t grow up with an eat-in island,” she says. That’s why she decided to dedicate the new island structure completely to hidden storage (the dishwasher and microwave live there now).

Another small epiphany they had during the renovation? They’re not sink-sprayer people either, so when the unlacquered brass faucet arrived from Rohl with a sprayer attachment, they simply left it off. “You don’t have to follow the rules and do things that everyone else is doing,” says Kat. “That was something we didn’t feel we needed.”

Light, Then Cameras and Action

If this renovation taught Kat anything, it’s that the order in which you do things often matters. Example A: By the time her French sconces had arrived at the house, the contractor had already closed up the wall and mounted the sleek marble floating shelf. She wasn’t about to have the crew open everything back up again so she could run the electrical. “So we ended up hanging them with just a nail,” she reveals (there are faux battery-operated puck bulbs inside of them, so no one will ever be the wiser). “The end result is a kitchen that feels so much bigger, more elevated, open, and inviting,” shares Kat. Who said moving to the suburbs had to be boring?