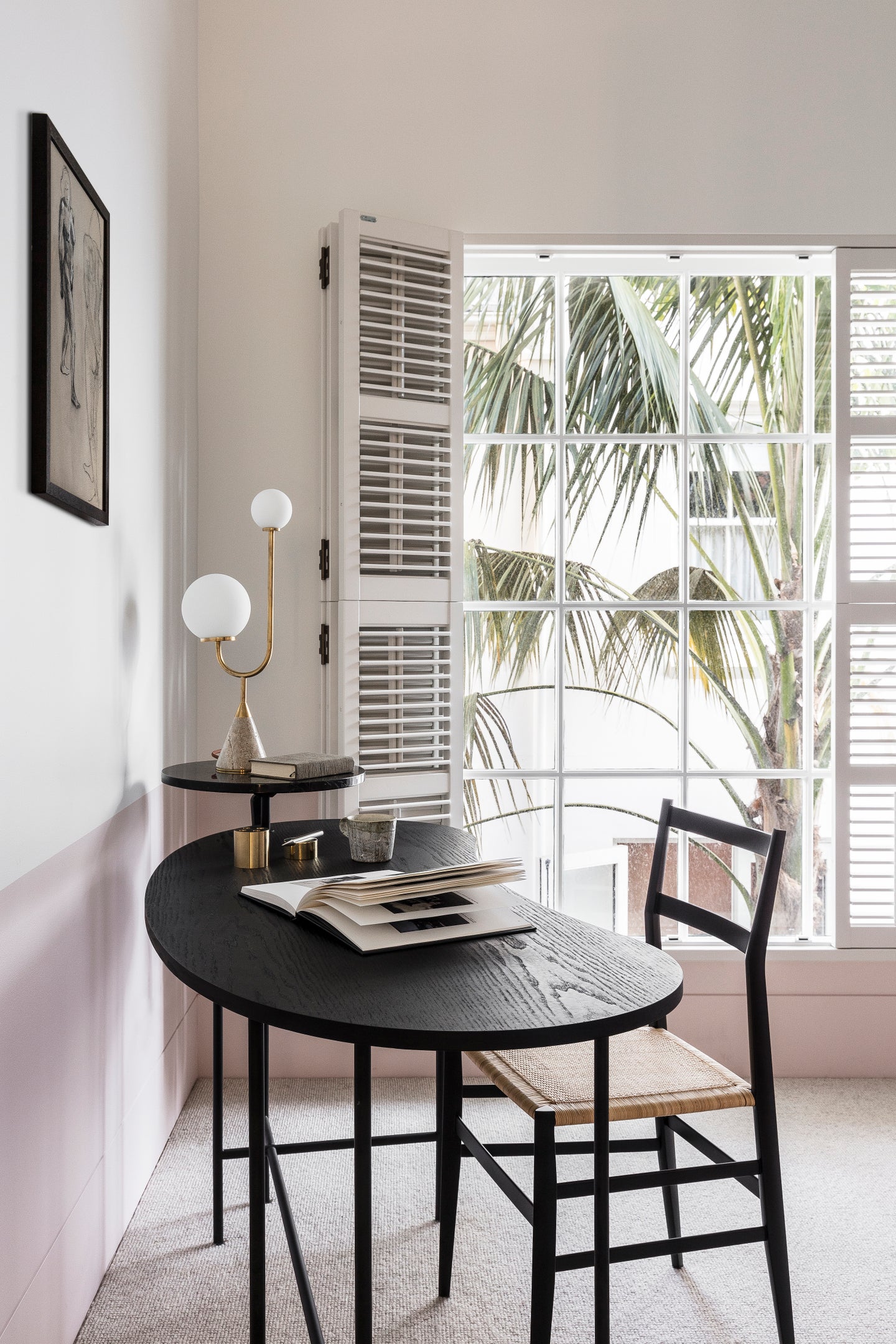 At first glance, this breezy Sydney house looks entirely devoid of color: Light greige plaster walls act as a backdrop for white linen seating, natural fiber rugs, and neutral architectural pieces. But let your eyes linger a little longer and you’ll see subtle color moments emerge: a cobalt blue mosaic tile here, a minty green border there. The quiet palette isn’t by accident; it brings the house back to its heritage roots while making it airy and welcoming for a young family of five.

Located in the Sydney Harbourside suburb of Darling Point, the Victorian cottage was on the smaller side and faced strict conservation laws that prevented the family from expanding the structure. Still, design firm Alexander & Co. was up for the challenge of completely transforming it into an airy, light-filled space. We asked principal Jeremy Bull to share how he took this tricky brief and turned the dusty house into a liveable family home.

The home badly needed a face-lift, but Bull wanted to ensure it stayed true to its architectural roots, and he made a point to choose Victorian era–inspired finishes and styles as much as possible, including a large marble hearth and claw-foot tub. For the kitchen, he created a streamlined take on an old “manor” kitchen. With limestone flooring and a brass pot rail that will patina over time, he struck a fresh balance between traditional and modern.

Instead of painting the walls in an array of bright colors, Bull only covered the lower half of the bedrooms in dusty pink or powder blue (each child chose their preferred hue) and he relied on polished plaster finishes and contrast borders elsewhere in the house. “The more subtle finishes allowed the home to feel like it had ‘age’ without forgoing the unique character.”

“The floorplan was inefficient for the family’s needs,” says Bull of the original awkward layout. To make it functional for everyone, the designer gutted the home and essentially rebuilt it from the ground up, adding bedrooms and wardrobes, moving staircases, and reworking the existing rooms so he was able to carve out just enough space for everyone to breathe—all the while being careful to stay within the strict council rules that protect the historical area.

“It’s a lovely cottage from the outside,” says Bull. Much of the design choices he made involved bringing the home’s exterior charm indoors: adding traditional shutters for a beachy vibe throughout and creating an open-plan bathroom with a skylight, rain shower, and border of vertical stacked green tile. The glazed ceiling and dark brass fixtures make the room—which was inspired by a sunroom—feel like a potter’s shed with garden taps. If the perfect marriage between minimal and traditional exists, this is it.

Discover more Aussie homes we love: Vintage Classics and Funky Pieces Live in Harmony in This Colorful Home This Aussie Designer’s Home Is the Result of Not One But Two Renos Quiet Meets Quirky in This Irreverent Sydney Home