This Tiny Pink Victorian Might Be the Cutest Home in SF 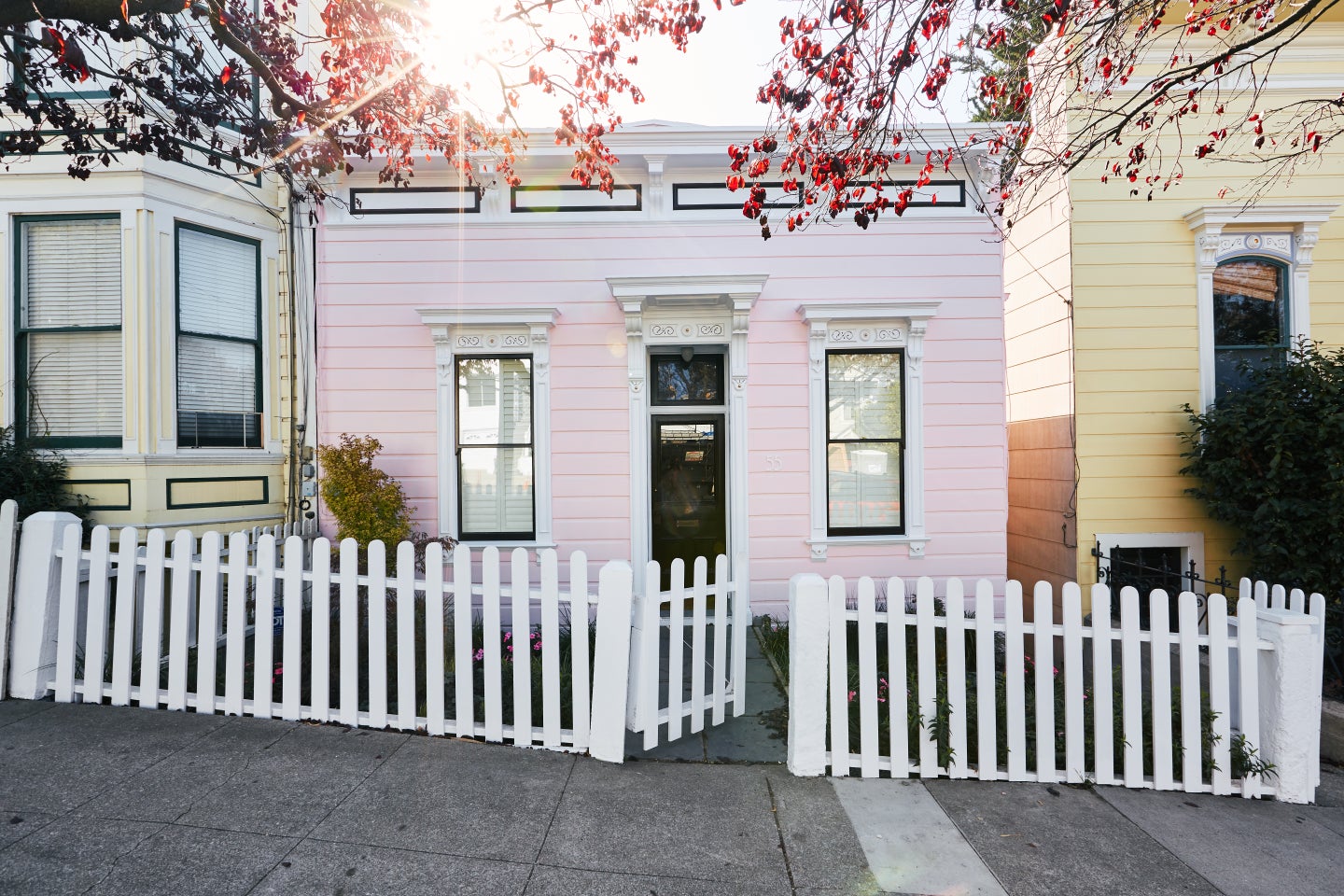 Designing a home from scratch is hard enough, but decorating a tiny space is an art form in its own right. Through the years, we’ve seen our fair share of small spaces at Domino, and with each, we discover an array of clever storage solutions and style-focused hacks geared toward making the most of limited square footage. That said, we still find ourselves in a constant state of awe, particularly when it comes to the near-ingenious lengths small-space dwellers go to maximize their square footage.

Decorative details such as color and pattern (and everything else in between) can go a long way in making a tiny environment feel like home. One small-space design element we’re always keen on seeing is a daring use of color, especially when it comes in an unexpected form.

Enter this 900-square-foot Victorian home, with its ultra-inspired exterior in a shade of sweet blush pink. Located in San Francisco, the charming home is chock-full of color and personality, thanks to lawyer-turned-designer Clara Jung, principal of Banner Day.

When it came to the design of the home, Jung took a rather rebellious approach, as she puts it. Striking a delicate balance between modern and whimsical, the goal of the project was to preserve the colorful and exuberant personality of the family all the while working within the constraints of a small space.

Inside, you’re greeted with a burst of color. The array of original artwork decking the walls, and the unapologetic splash of patterns by way of the intricate wallpapers make a statement in their own right. The decorative aesthetic of the home is one that blissfully blurs the line between modern and traditional—the two grounded by the fresh and playful use of color throughout.

The clients, who moved into the home from a mere block away, were faced with a layout that vastly differed from their original space. While it was not necessarily a downsize, the distinct format of the home, which was comprised of the main house and smaller guest cottage, presented a fresh perspective.

As Jung had previously worked with the client in their old space, the established relationship made for a more seamless transition. A handful of the existing furniture pieces were moved into the new home, and the client’s affinity for color and pattern was carried over. The bright yellow sofa, which doubles as the undeniable focal point of the living room, was one example. It made the process of settling on a decorative scheme easier.

“The palette was already predetermined, and we had to work in new furniture, artwork, and decor to make sure the new items complemented the existing furniture,” recalls Jung on the process of having to curate the scheme of the new home.

While most small-space dwellers may shy away from integrating an abundant use of color in tight quarters, Jung was all for embracing her client’s fondness for it. Toning it down was not necessarily a preferred course of action, but the duo did want to provide a few moments of respite.

“Continuity is harder to achieve when you’re working with a bigger palette,” notes Jung of the challenges in integrating such a vibrant use of color within a small space. “It was also important to establish cohesiveness throughout the home.” She did just that, successfully marrying the diverse range of colors while establishing a continuous flow throughout.

In the dining room, an ode to the Bay Area presented itself in the form of an extremely detailed wallpaper. “I originally suggested this wallpaper to her because it had an amusing take on traditional toile,” notes Jung. “If you look carefully, the pattern incorporates important Bay Area landmarks and people. You can see icons such as Alice Waters and Joe Montana as well as the Golden Gate Bridge and Victorian homes that pepper the SF cityscape.”

The dining room furniture, which was another element brought from the client’s previous home, was crafted by local maker Dave Ball of Jacob May Designs.

The perennial question of finding viable storage space undoubtedly loomed overhead, although this only provided the team with the opportunity to think even more creatively about style-focused solutions.

“With limited square footage, I believe you need an ample amount of closed storage,” says Jung. “Sure, there are ways to curate and make your dishware, ceramics, and books look pretty, but what about all the other life necessities such as wires, plugs, tools, etc.?”

The kitchen buffet is a prime example of how Jung chose to integrate closed storage within the small space—one that would provide a clever disguise for items the client may not have wanted front and center. “[She] can store whatever she needs close at hand in this buffet, and the top can be also used as a landing space for additional plates and dishes when she’s hosting a dinner party.”

When it came to designing the bathroom, Jung was working with a firm deadline. Due to the time crunch, the two had to forgo the tiles they had originally sourced for the space (which had a longer lead time) in favor of alternatives that were readily available.

After all was said and done, the finished product was one that satisfied both parties. “I love that the shower surround tiles are simple but have different finishes to catch your eye,” says Jung. “And the statement-making cement tile floors bring a strong voice to the room. You wouldn’t think that these two different types of tiles would necessarily play together, but looking at it as a cohesive whole makes it work.”

In the end, the decorative aspects of the home embody a delicate balance between the old and the new—the stunning stained-glass windows paired with the mid-century-modern credenza, for example—all the while maintaining the colorfully charged aesthetic that gives the space its unique character and feel.

Discover more homes we love: In This Breezy Melbourne Townhouse, Laid-Back Life Is Key This Interior Designer Throws Parties for 80 People in His 480-Square-Foot Studio This Surf-Inspired Bachelor Pad Is a Master Class in Custom Renovations