Give this furniture layout a go. 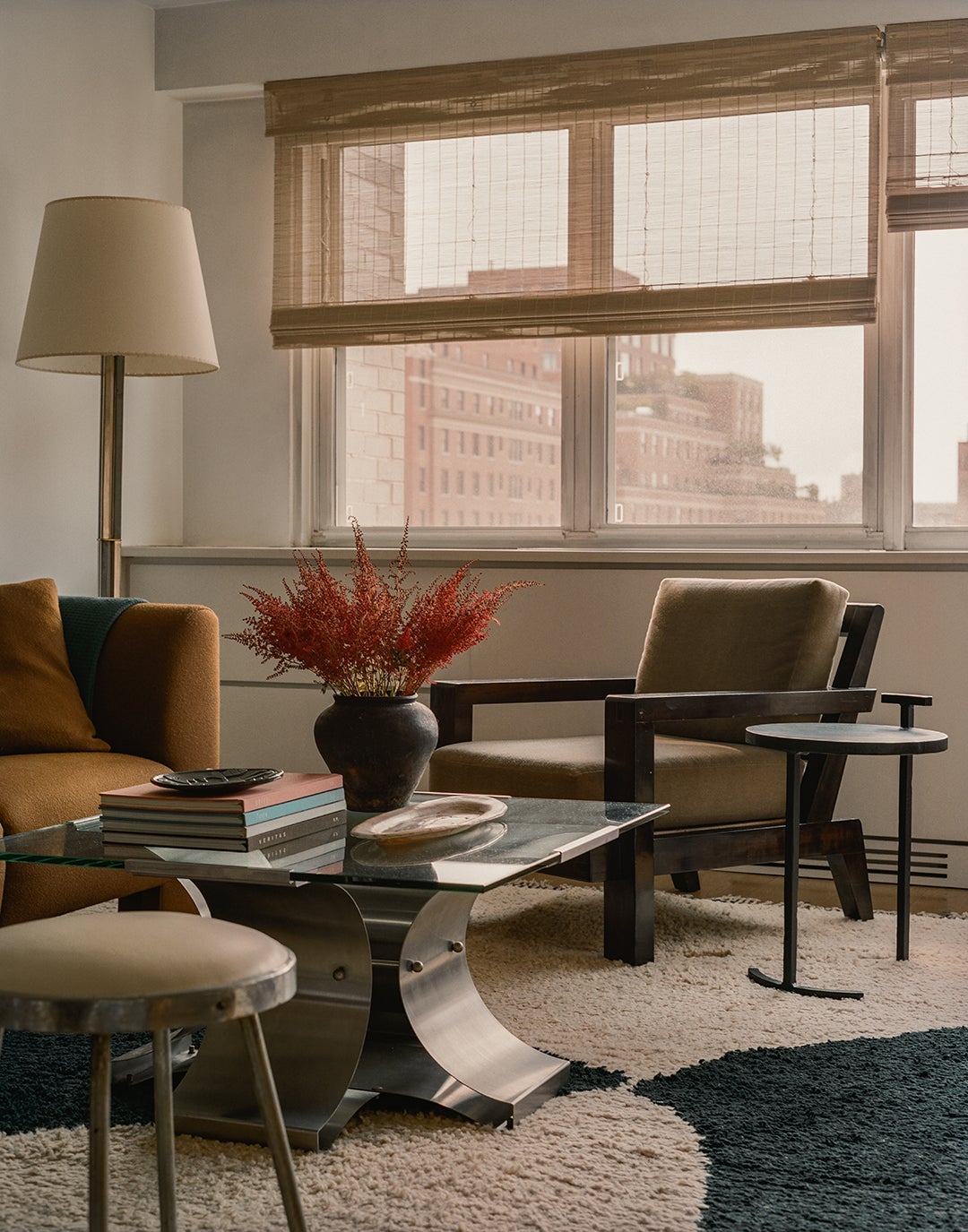 Buying a sofa without ever actually sitting on it is a risky move. But interior designer David Lucido had a convincing argument for his latest client, a CMO for a Los Angeles–based vegan cosmetics brand who splits his time between the East and West coasts: “If it’s from the 1970s or ‘80s, it’s going to be comfortable; it’s going to be deep.” Lucido is right. The 1985 Stanley Jay Friedman couch he sourced for the client’s apartment in Manhattan’s West Village is not only a dream to lounge (or nap) on, but the mustard-hued piece (Lucido swathed it in Maharam wool fabric) doubles as a sculpture of sorts thanks to its wavy back and mirrored chrome base. The sofa set a precedence for the 530-square-foot alcove home: Size doesn’t determine the style. “It’s like the little jewel box of furniture,” the designer says of the recently revamped space.

Before Lucido came into the picture, the unit had been decorated nicely, but with what he describes as off-the-rack finds or starter furniture from big-box retailers. The client, who sometimes rents the place out when he’s not in town, wanted to give it a glow up in the form of carefully curated art and vintage items. “With such a small space, you have to carefully consider every little thing that comes in, because there are not many places for your eyes to wander,” Lucido points out. Example A: the mirrored glass orb by Object LA/NY that’s positioned on the wall over the headboard—it’s attention grabbing in the best possible way. “It’s an unexpected moment,” he adds. Ahead, the designer breaks down seven more details that made the studio feel luxe and large.

The shaggy Moroccan rug features a bespoke pattern Lucido created in collaboration with a vendor on Etsy. The shapes are meant to mimic the curves of the sofa, and the textile also happens to speak to the art that now hangs on the wall. “When we saw that, it made so much sense to pair the two together,” he says.

The built-in banquette with storage (the client keeps spare linens in the bench seating) was preexisting, but Lucido zhuzhed it up by topping the surface with a cushion and a brown leather backrest that can snap onto the wall. “The best way to save space and add comfort was to mount those parts—they’re very thin and you’re not fussing with anything,” he shares.

When Lucido said the goal was to give the space a glow up, he meant it: “I’ve been really loving these bubble pendant lamps lately,” he says, referring to the 1960s Italian fixture over the Milo Baughman dining table. The sculptural pick was a vintage Etsy find. Sourcing primarily secondhand items wasn’t just a way to get rid of that new, white-box apartment feel—it also meant he could get things delivered fast, given most major retailers’ inventory has been backed up during the pandemic.

A chunky sectional couch would have eaten up the main living area, spatially and visually, hence the three-seater sofa. From there, Lucido brought in an armchair and positioned it by the window next to a black steel side table by the designer’s Bronx-based metalsmith friend, JM Szymanski. But instead of finding a matching piece for the other side of the space, closest to the entry, he bought in two stools that can easily scoot over to the dining table when guests come over. “They’re extremely versatile,” explains Lucido. The metal pieces also fulfilled his search for a bevy of different materials. “I keep a mental checklist of wood, glass, stone, etc. It’s important to have that full picture,” he notes.

In the bedroom, Lucido saved floor space by skipping nightstands altogether. Instead the bedside lighting (the sconces are from Schoolhouse) has been integrated into the amber-toned velvet headboard, which is mounted flush to the wall. “It maximizes the look of that nook,” he says of the built-in piece.

“I just hate media cabinets,” says Lucido, laughing. ”It’s almost 2022; no one really even needs storage for that stuff anymore.” Still, he notes, while you might not need a cupboard for hiding a DVD player, you should have something to ground the black box if it’s mounted on your wall, that way it doesn’t look like it’s floating midair. Here he went with an old wood bench, which, much like the stools, can double as extra seating when needed.

Don’t weigh down an already crowded room with dark, pooling drapery; opt for delicate treatments instead. Here simple matchstick blinds lend a natural glow and warmth to the bedroom and living space. “They dress the windows in an organic way,” notes Lucido. A clear view of the outdoors (or in this case, the Manhattan skyline) makes a 500-something-square space feel all the more expansive.

Photography by Ori Harpaz, shot on film with a medium-format camera.