When You Live the #VanLife, How Do You Quarantine?

Three couples open up about their experience. 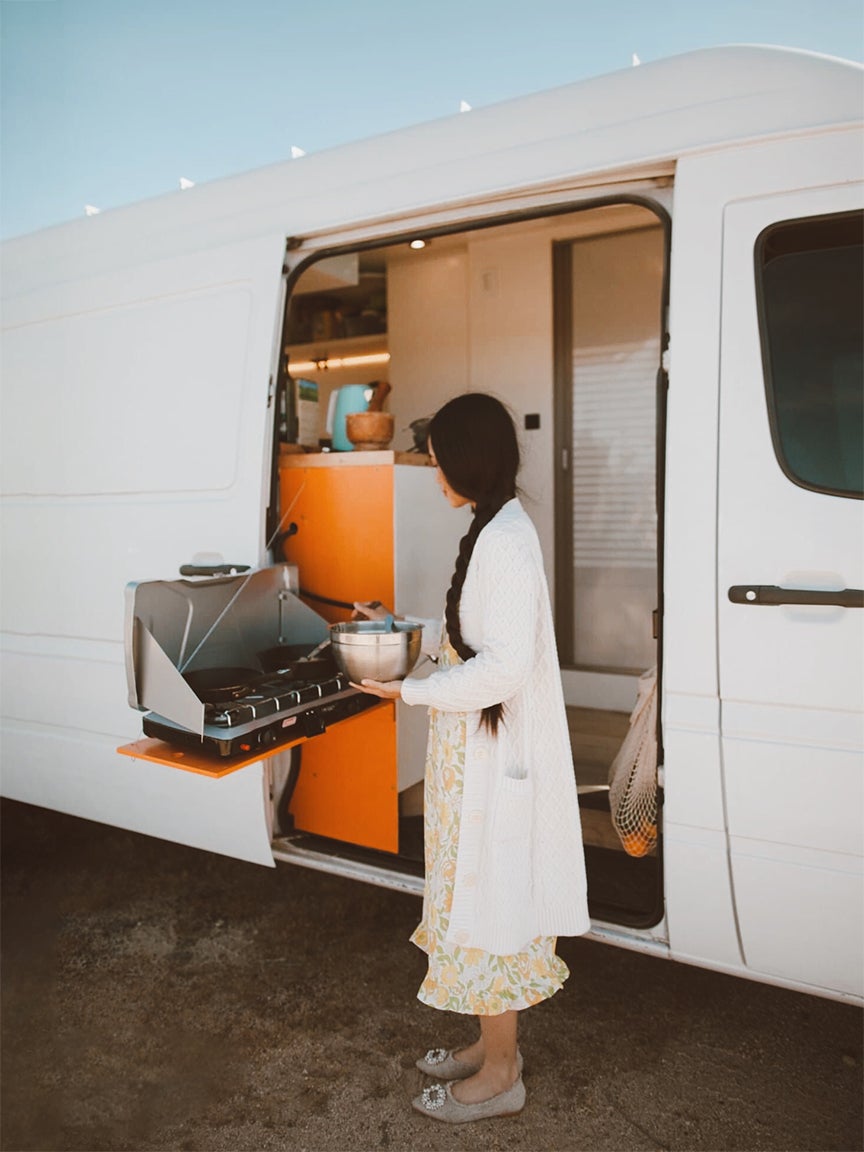 Courtesy of May Pham

Home looks a little different for everybody. And for those in the van life community, it most often involves four (or more wheels), a setup that makes the most of minimal square footage and an ever-changing view outside the window. But when you’re ordered to shelter in place, suddenly that nomadic way of living comes with a whole new set of challenges. How do you quarantine when you consider the wide-open road a central component of your lifestyle?

It depends on where you are, what your van is equipped with, and what drew you to the unconventional housing option in the first place. As people take this time to consider what they want out of their home and maybe even consider leaving their cities for smaller towns or the country, van life seems destined to grow even more popular—the hashtag alone already has more than 7 million posts.

As easy as it is to romanticize such a lifestyle, there are also some challenges to face—which is why, with the spread of COVID-19 and social-distancing measures, some van-goers decided to put down roots, at least temporarily. That’s the case for Martha Main and Nat Tingley, who travel in a renovated 2017 Ram Promaster. In early March the couple was planning on heading out West after spending time in Savannah, Georgia. But news reports on the virus made them reconsider. “We were getting a lot of information, but it was pretty manic and inconsistent,” says Tingley. They had just crossed into Beaumont, Texas, when they decided to turn around and drive 1,700 miles over the course of three days back to their home in Rhode Island.

A key factor in their decision was practicality. Their van, like many smaller models, is not equipped with a bathroom, so they typically rely on public facilities and gyms for showers (Planet Fitness is a common stop for many van-lifers). The prospect of these businesses closing made their lifestyle suddenly unsustainable for the time being—there was nowhere to go but home.

Also stopped in their tracks were James and Deanna Dunn—but not for good. The couple is based in Los Angeles but travel out to Pennsylvania every spring to do maintenance and service at a nuclear power plant, which frees up time during the rest of the year for them to travel and work on their own projects—including renovating a vintage camper and a sprinter van. This year they had packed up their apartment in storage before heading over—but once they made it to the East Coast, the pandemic had set in. After safely quarantining, the couple did their work at the plant and, once finished, began devoting their time to a “quarantine van build”—their biggest project yet.


We’re stuck in quarantine, so we’re converting this van into a #campervan! Here’s the rundown so far! #quarantinevanbuild ?

They are staying with Deanna’s parents in New Jersey and in the process of transforming a RAM Promaster into a totally livable vehicle, complete with a shower, mini fridge, queen-size bed, and sectional seating area. When it’s finished, they’re considering getting back on the road once national parks and other outdoor attractions are safely open for visiting, since the van’s shower, toilet, WiFi, and the like would allow them to travel without relying on any kind of public facilities. “Eventually we’re going to get back to L.A., but we have the freedom to do this longer-term now,” says Deanna. “It gives us flexibility timeline-wise.”

May and Derek Pham had been planning to make the leap to van life for the past two years—and after buying their van on New Year’s Day quickly decided to speed up the process. “We felt the impact of the pandemic much earlier, as friends and relatives who traveled to China and Vietnam faced delays, cancellations, and quarantines,” says May. “We sensed this thing would get much worse.”

Though they initially planned for at least six months to convert the vehicle, in mid-January, Derek started working on it for 10 to 12 hours each day, finishing it in just three months. They moved into the van on April 1, but continued work on it for another two weeks. Since then, they’ve traveled around California—never too far from Los Angeles, where May’s parents live.

As a travel-oriented content creator and Amazon seller, respectively, May and Derek consider the shift to working from the van relatively seamless and have found the money saved that would otherwise go to their rent and utilities a relief in this tough time. Plus it’s given them some perspective on how they want to live their lives. “It feels awesome to wake up by the poppy field in full bloom in Lancaster and catch the sunset in Joshua Tree,” May says. “We’re enjoying this minimal way of living—using less water and only buying things that we need.” They plan to live in the van for at least two years, and once international travel is safe again post-pandemic, make their way to Canada, Mexico, and South America.

What Main and Tingley, the Dunns, and the Phams have in common is the response they’ve gotten from friends and followers—many of whom are intrigued by the prospect of taking up van life for themselves now and in the future. But Tingley admits that the lifestyle likely won’t be the same as it has been, in his and Main’s experience: One big reason why the couple embraced van travel in the first place was because of the community it fostered. They made friends with the people they met in their travels, but now see those kinds of relationships being harder to forge. Social distancing does not necessarily lend itself to forming bonds with strangers. “The van was our tool for auditing different places around the country and eventually deciding where we might want to live,” he says. “But if we can’t experience those cities in a more meaningful way, we’ll focus more on nature and visit public lands.”

For the Dunns and the Phams, life on the road is mostly about the ability to pare back to the essentials, create their own schedule, and—to whatever ability then can—find their independence from a mortgage, a commute, and a static day-to-day. And that, in a moment when many are redefining what exactly constitutes a home, is a compelling prospect indeed. “We have that freedom to enjoy ourselves,” says Deanna. “Even if that just means taking an afternoon, parking somewhere, and drinking coffee out the back.”