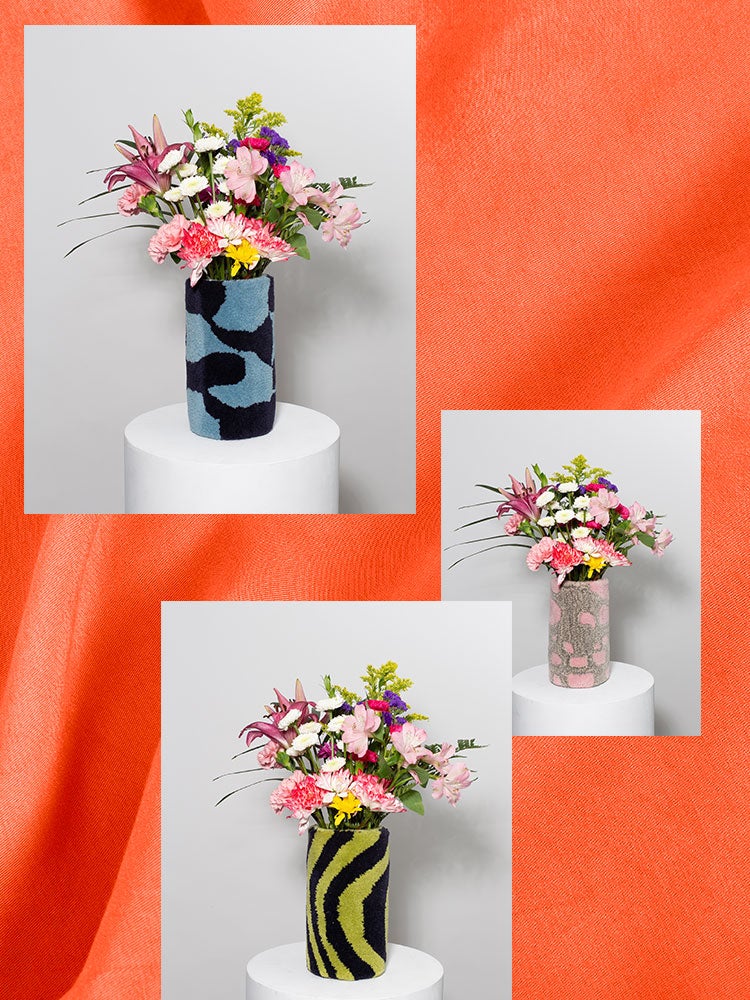 Ugly Rugly makes one beautiful vase given its name. The New York–based studio, best known its oddly shaped, strange-in-a-good-way rugs and loopy baskets sold at Urban Outfitters, dropped a new collection of quirky accessories this week. In the mix: a fuzzy vessel inspired by outer space.

The idea for a carpeted vase first came to founders Lauren and Cole Hansen about two years ago, when they had some extra rug scraps lying around. Lauren held up one of the test fabrics to a container…and voilà! “The birth of the tufted vase,” she says. It took a while for the artists to turn the prototype into a functional catchall, mainly because they couldn’t figure out how to secure the soft slipcover to the glass cylinder inside. “Anytime the vase was moved or picked up, there was a risk of it slipping out the bottom,” recalls Lauren. Then an aha moment: The couple realized they could seal the opening with the same bindings they sew to the back of their rugs.

The duo drew on interstellar events like eclipses and terra-forming planets for the pieces’ psychedelic patterns. “Really nerdy stuff,” says Lauren, laughing. To create the wavy design, the designer imported a photo of striped fabric to her computer and manipulated it until she got an organic shape. “I tried to capture the feeling of something moving through space,” she says. Their entire collection is on preorder sale from now through October 11, with items shipping in early December.

We were immediately smitten with Ugly Rugly’s textured containers, and not just for looks. Frankly, they also take the scariness out of breaking them. So go ahead, snuggle one. Then fill it with fresh blooms. These vases are fur-real.

See more stories like this:  How Ellen Van Dusen Scored Her Zany, Cartoon-Like Chandelier Is It Just Us or Does This Decor Look Like Soft-Serve Ice Cream? We’re Seeing This Glossy ’80s Design Everywhere, Are You?