And other lessons from a dreamy NYC loft. 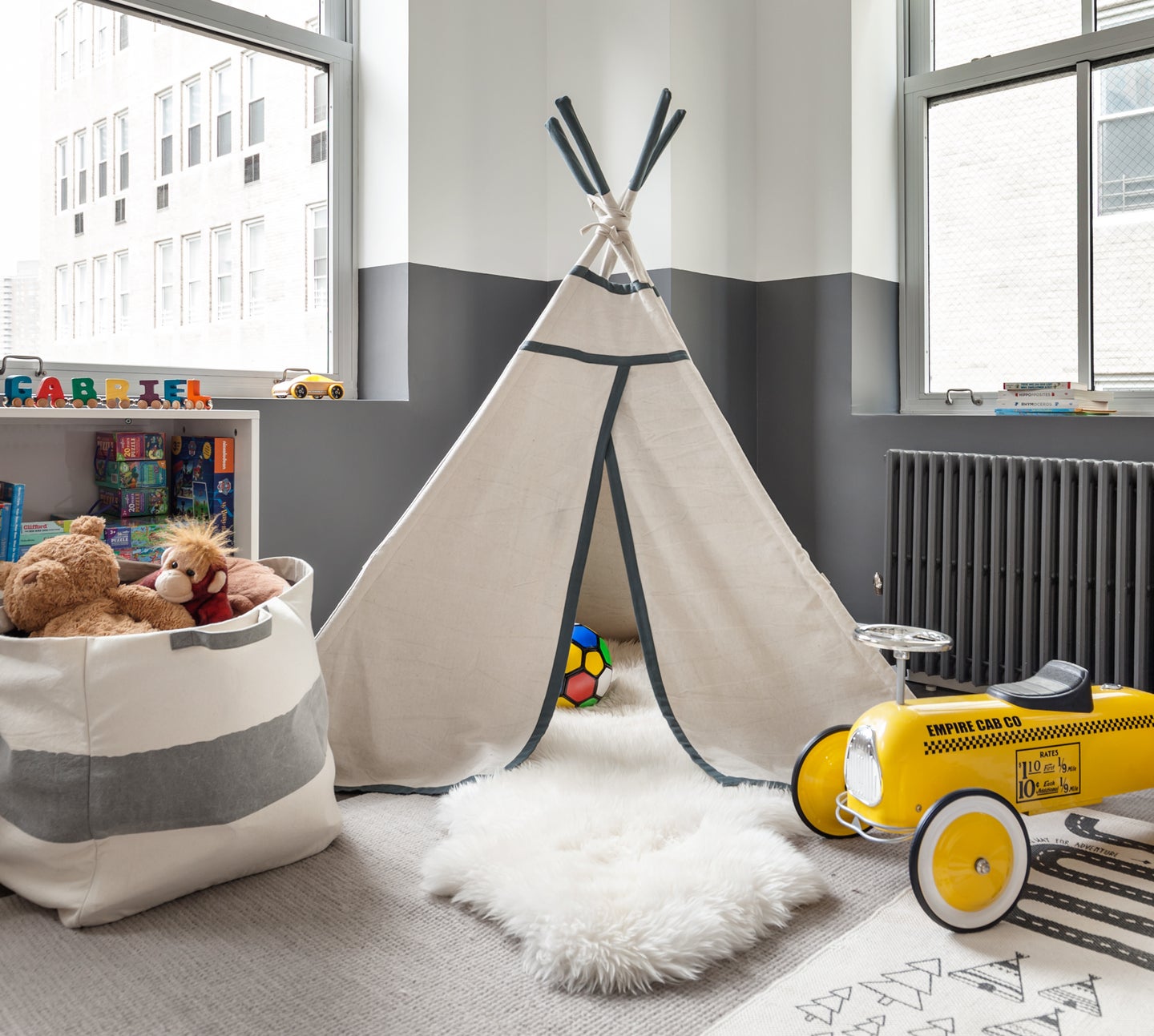 As starter apartment stories often go, a small space fit for two can start to feel crowded when you introduce a kid to the mix—let alone two. With plans to add a second child to their growing tribe, a young couple living in Manhattan tasked interior designer Allison Lind to complete their search for space. Their pursuit would eventually land them in a sun-drenched loft in Tribeca, now finished with an airy whitewashed kitchen and sublime playroom.

“The light is just glorious,” says Lind of the space. “I think as any New Yorker knows, an apartment with beautiful windows and natural light is like finding the pot at the end of the rainbow.”

Framed by views of the East River and Brooklyn Bridge, the sweeping downtown vistas are the clear focal point of the loft—a refreshing change from the cosmetic eyesores and disruptive structural beam in the kitchen that used to distract in its place.

“The place was… interesting,” recalls Lind. “The layout in the kitchen was a huge problem. To get from the stove to the sink, you actually had to walk out of the kitchen around a peninsula to the other side.”

The only salvageable feature in the home was a built-in wall unit in the media room, which has since been resurfaced and elevated with fresh hardware. With the help of Raad Studio, Lind set out to shift walls and relocate the master bedroom and bath before introducing soothing neutrals and classic furnishings with clean-lined silhouettes to the scene.

“My clients lean more toward contemporary with a bit of a transitional bent and mid-century flair,” says the designer. “With the intensity of New York, they wanted the space to feel really serene.”

Ahead, Lind gives us a peek inside her latest project and reminds us that even the most awkward apartment layout is no match for good design.

The shelving system in the kitchen is a sight for sore eyes. Was this unit in the original plans?

We had all these plans and ideas of what to do with this beautiful kitchen to brighten things up and, as we started demolishing walls, we found out that we couldn’t move that thing. It was a huge bummer, so we really stressed over that structure. It’s an awkward shape. We didn’t want to make it a perfect square because that would really break things up, and cladding that rectangular shape in anything strictly decorative would have also felt out of place. Cabinet space in every apartment situation is minimal, so we thought, let’s maximize where we can store stuff.

Why did you decide against floor-to-ceiling with cabinets?

The base unit on both sides offers functional hidden storage. A lot of people scoff at the idea of open shelving because they think it’s going to look busy, but I think, in this regard, full cabinets would have felt too heavy. This adds something interesting. You have accessible shelves for everyday glassware, morning on one side and partyware on the other.

What’s the one element you think about the most when designing an entryway?

To me, the entryway is the place that makes that first impression when people come in. I wanted it to be pretty, but it also had to be functional. When you’re coming in with a stroller and a baby from the streets of New York, you’re going to need a place to sit down and take off shoes and coats. Then we fell in love with that table from ABC Home with that gorgeous wood grain.

The palette appears to be pretty consistent until you reach the media area. Why did you decide to go so dark here?

The living room and kitchen are so bright and airy that I felt like we needed moments to break that up, so that’s why I pushed them to go darker in the media room and playroom. It gives the eye a break. Art, plants, and other pops of color introduce spunk and personality to the spaces.

How did you land on the two-toned walls for their oldest child’s room?

Little kids grow up so fast. He’s a toddler right now, but soon he’s going to be a little man and will have strong opinions about what he wants. Had we painted the walls your stereotypical “boy blue,” he’d eventually tire of it. I see this as a fun canvas. We didn’t want to leave the walls white and we wanted to do something that was interesting and shift over time. The art and the tent, for instance, can be changed out as he grows. We wanted the same serene feeling in here as to not overwhelm the kiddo, but then, of course, you get so much color and fun through the art and the toys.

What’s the best way to incorporate a playroom in an open space or small apartment?

The reality is that if you have kids, chaos is inevitable. There are going to be messes unless you’re a magician. With this space, we provided areas where it’s easy to tuck the mess by bringing in baskets and bins for quick and easy cleanup. We also did floating shelves as a fun way to incorporate arts and crafts while still streaming in. It’s not a bunch of things posted to the wall—there’s some order to it. Then we had that built-in bench created so it’s comfortable for everybody, including adults.

If you had to pick a favorite moment, what would it be?

The powder room wallpaper. I’m so unbelievably obsessed with it. It’s by Eskayel. I could sit in that room and stare at that wallpaper for hours.

This Supermodel’s LA Home Is All About Cozy Neutrals