How to Make the Plant Wall of Your Dreams

Green is the new gallery wall. 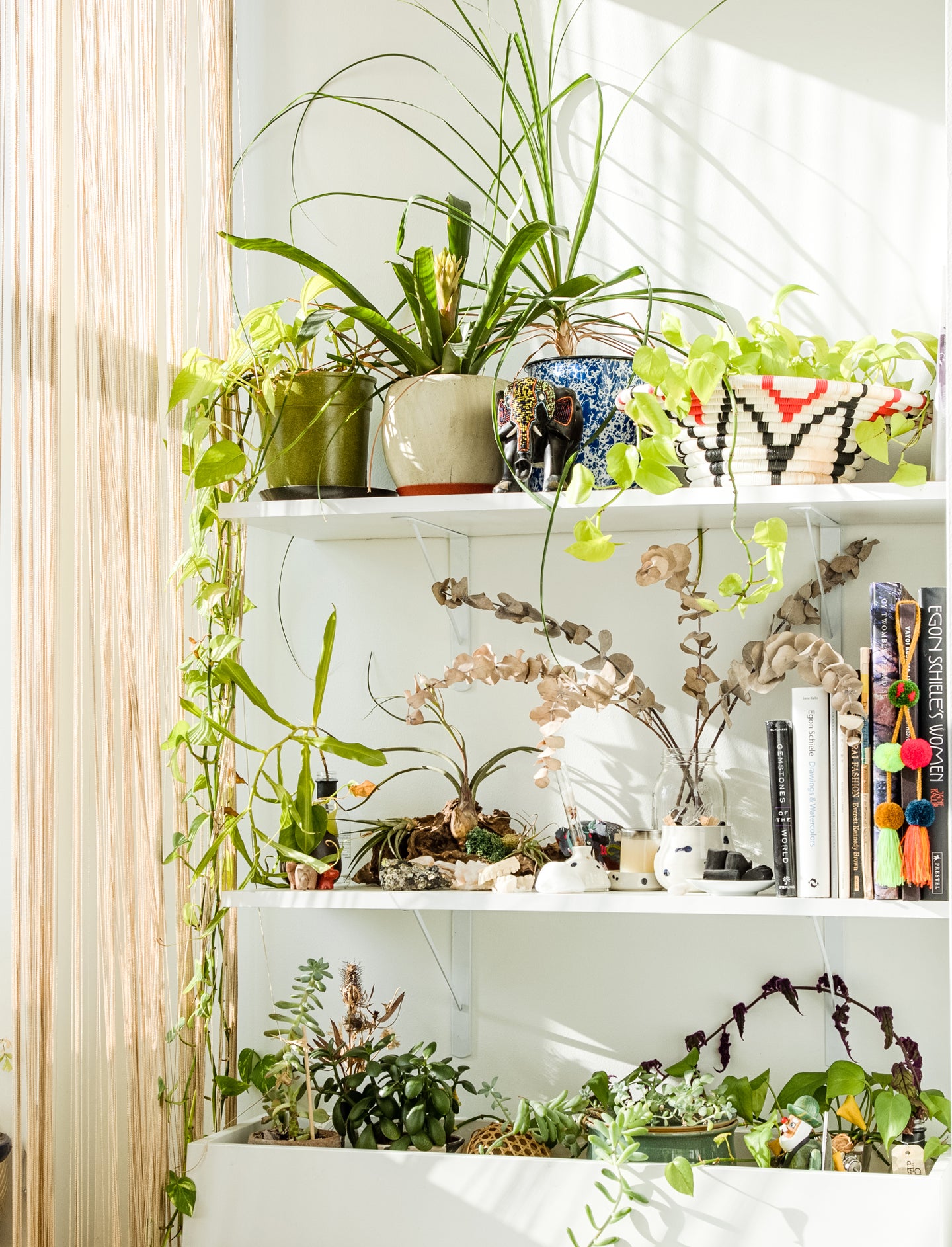 The world is divided into two types: Plant people and everyone who wishes they were a plant person. If you already have a greenery-filled home, you know firsthand the benefits of living among (controlled) nature. If you identify as the latter, you’ve undoubtedly heard of these pros. A source of negative ions and general zen, plants bring an element of calm into any space they inhabit. Plant walls are where this wellness-based decorative touch meets the art of the statement wall. After all, who needs a gallery wall when you can have a living, breathing assortment of greenery in its stead?

While a plant wall can feel quite daunting to re-create in a residential space, it doesn’t have to be. There are tons of different ways to create one at home—some are a heavier lift, and some are super basic. It can be as simple as stacking your greenery on a bookshelf or plant stand. IKEA’s Satsumas stand comes with five pots and encapsulates stylish Scandinavian minimalism. In a pinch, it’s perfect for a mini plant wall that’ll spruce up an empty corner.

But if you’re willing to put in a bit more work, we have you covered. We spoke to experts in the plant design field to get their intel on all things related to plant walls. From knowing what plants to pick to figuring out exactly how to install a plant wall indoors, their tips will set you up for success.

It’s best to go with extremes; either choose a bunch of the same exact plant to create the greenery equivalent of a monochrome design space or aim for as much variety as possible. “Trailing plants, like a heartleaf philodendron or spider plant look great in wall planters, intermixed with some mounded or upright plants such as philodendron congo, monstera, or rubber plants to provide some texture variation,” suggests Lisa Muñoz, founder of Leaf and June.

Aside from visual impact, the other thing to consider when choosing plants for your wall is their care. “Choose plants that all like the same amount of moisture,” recommends Ali Glokler, head of indoor at Harrison Green. “If you use a plant that likes to completely dry out between waterings and a plant that likes constant moisture, they won’t work well together and ultimately, one will die out.” She recommends a variety of ferns, such as Bird’s Nest Ferns, Bluestar Ferns, Silver Ribbon Ferns, and Kangaroo Ferns.

Rebecca Bullene, founder of Greenery NYC, says to also be mindful of light requirements. After you’ve ensured the care for your plant wall is uniform, have fun mixing it up: Bullene recommends a mix of plants that grow upward with plants that cascade.

Next, Choose Your Vessel

Perhaps the single most important part of creating a good plant wall is ensuring your planter has enough drainage. Muñoz cautions that many indoor wall planters don’t have drainage holes. Instead, DIY it: “You can include your own built-in drainage by adding rocks to the bottom, and be sure to check the soil thoroughly before watering,” she says.

Glokler actually finds planters without drainage holes to be easier, though she cautions that they will likely require more attentive care. Also, plan for unforeseen water damage. “If the planter has holes in the bottom, do you have a place for the water to drain out and not spill all over?” she says.

Muñoz reminds us to consider the weight and material of the planters. “While plastic or a glazed ceramic is great in protecting walls from any spillage or dripping, it doesn’t breathe like an unglazed ceramic planter, meaning that the soil might not dry out as quickly,” she explains. “There are plastic wall planters that do have some perforation, thus allowing the soil to breathe without spills or drips.” She’s a fan of WallyGro planters, which mount directly into the wall.

For Bullene, the best planter is one that requires minimal work on the part of the plant parent. “Rather than something that is permanently fixed to the wall, I like using planters that are on brackets and allow the planter to be removed—that way, if there’s ever an issue, it’s easy to pop the planter down rather than trying to work on a ladder,” she says. Aside from the WallyGro planters (apparently a universal favorite among the plant community), she likes Ferm Living for their elegant yet functional planters. Go for the Hexagon Pot with a simple black Plant Holder. Scandi simplicity at its finest.

How to Install Your Plant Wall

Much like installing open shelving, you’ll need prep and the right equipment. Figure out what kind of wall you’re working with and make sure you use anchors so your new little green friends don’t tumble to their deaths unexpectedly. Bullene also says it’s important to have your plants already potted for maximum ease of installation.

“I always lay out my wall pattern before drilling holes, first in Photoshop, and then again on the wall using tape,” explains Bullene. “I like to make odd-numbered patterns—like three, five, or seven pots, for example—so I use blue painter’s tape to be sure I like the look and spacing before I mount them.

Muñoz favors a full, lush plant wall instead and nests modular planters next to each other to maximize the green. That said, the main thing to keep in mind is that laying out a plant wall is much like laying out a gallery wall: There’s no right way to do it, and it’s totally personal. “If you have planters that are unique and you want to showcase them, it’s great to space them out and plant non-trailing plants to give the planters time to shine,” she offers as an alternative.

If you don’t want to install planters directly into your wall, use open shelving instead. Maybe you already have shelves up and are looking for something new to display; or, maybe you’re willing to DIY them. Either way, this is a great idea because if you ever tire of your greenery wall (perish the thought!) or if your plants end up dying, you can repurpose the shelves as bookshelves or a tchotchke display and create another decorative vignette.

Glokler is particularly a fan of this tactic. “I’ve had the best luck using rectangular or square planters that sit on top of the shelves,” she says. “If you plant dense enough, the shelves disappear and all you see are the plants. It’s an easier way to create a plant wall that doesn’t require an irrigation and drainage system.” Opt for a super-basic, minimal wooden shelf big enough to house your planter of choice.

How to Keep Your Plant Wall From Dying

Not to put a damper on your plans for a living wall, but plants are fickle things. “You will inevitably have some plants that don’t take well or die out,” warns Glokler. “No matter what science will tell you about a plant, you may find that it requires completely different care. Take time to get to know your plants and understand what they are trying to tell you.” If you start out not demanding perfection, you’ll avoid a lot of frustration down the road.

To better your chances, consistency is key. Gloker recommends sticking to a watering schedule and refraining from playing Tetris with the planters, cautioning that plants need stability and don’t like to be moved around a lot.

“Plants will need weekly care, so don’t put them too high or in a place that will be hard for you to reach every week,” advises Bullene. After seeing people mount planters over their beds only to quickly realize that this makes watering and pruning a precarious activity, she recommends instead having your wall be somewhere that can get a bit messy and is within reach.

“My goal is always the long-term health of the plants—they look better as they age in place and really fill out, so be sure to make them easily accessible,” she says.

See more plant stories: It’s Official: These Are 2019’s Trendiest Plants How to Rescue Your Plants in Colder Weather I Took an Online Class to Make Me a Better Plant Parent