The Design Lover’s Field Guide to the French Riviera 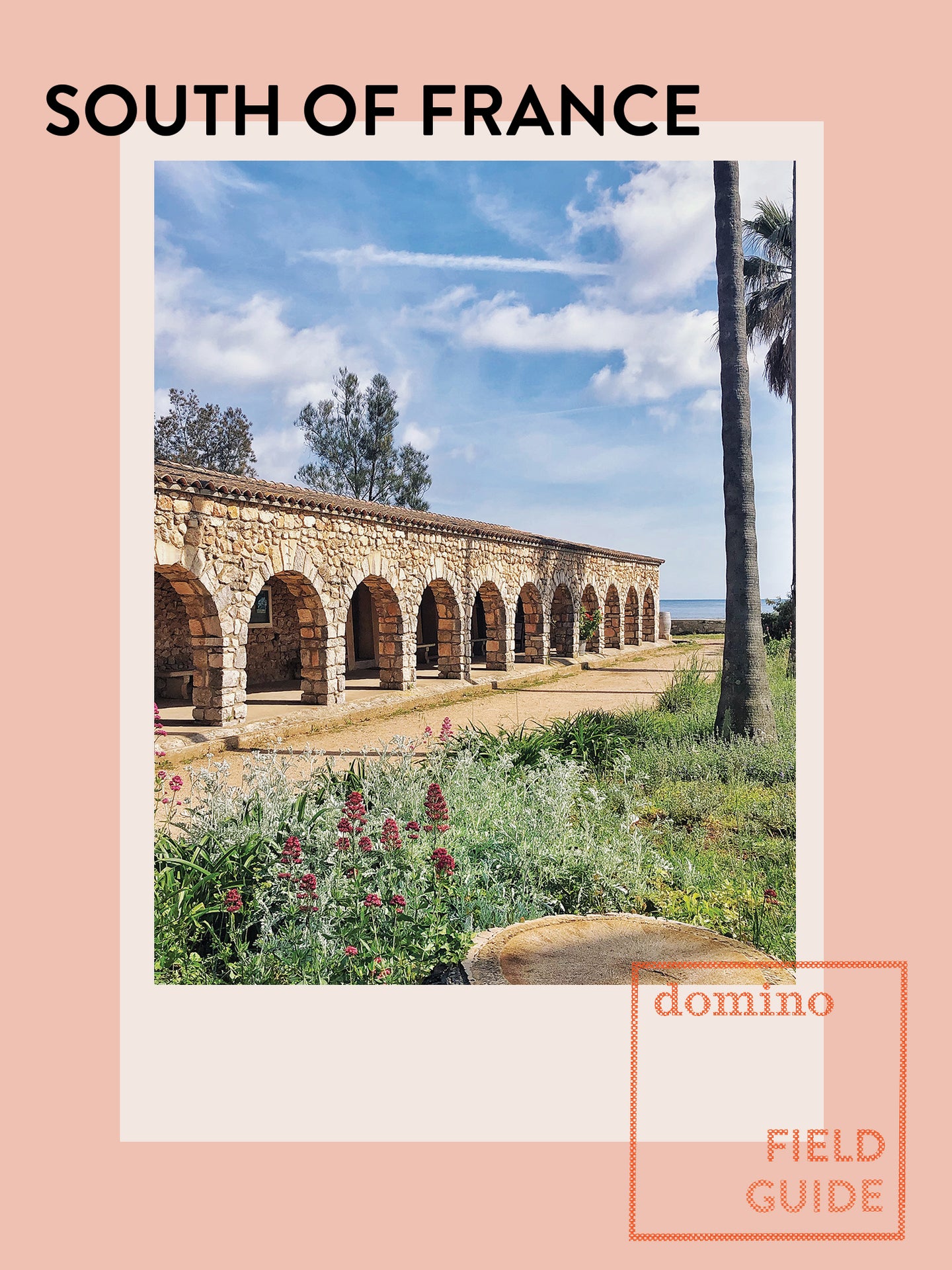 When you only have days (or hours) to explore a new city, Domino’s Field Guide is a need-to-know edit of the coolest bars, hotels, restaurants, galleries, and boutiques in the top design destinations. Next up: the French Riviera.

There are few better places to be when the weather is warm than the French Riviera. The crisp Mediterranean Sea glistens in the sunshine and the rocky cliffs make a perfect diving board. I was definitely feeling the destination calling my name on the inaugural seasonal flight from New York to Nice on La Compagnie, an all-business-class French airline that also services NYC to Paris. Crisp rosé and a selection of fine cheeses on board set the tone for the rest of the trip. From Nice, there was so much to explore: the buzzy beaches of Saint-Tropez, the antique shops of Isle-sur-la-Sorgue, the natural beauty of Cap d’Antibes, the art-filled  Saint-Paul-de-Vence. A seven-minute flight on Monacair will even take you all the way to Monte Carlo, where the breathtaking cliffside views and turn-of-the-century architecture will have you feeling like a modern Princess Grace.

Feeling the same pull of the French Riviera as I did? We mapped out the perfect itinerary from Saint-Tropez to Monte Carlo. Bon voyage!

Hôtel de Paris: Pass through from some of France’s most beautiful villages—St.-Jean-Cap-Ferrat and Èze—and you’ll find yourself in the heart of Monaco, where Hôtel de Paris, Monte Carlo’s oldest property, first opened in 1863. But don’t let its age fool you: It just underwent a four-year renovation to unveil a palatial, meticulously restored hotel with multiple Michelin-starred restaurants, a 7,000-square-foot spa, and nightly live music at Le Bar Américain. If small and low-key hotels are more your speed, SBM Resorts’s sister property, India Mahdavi–designed Monte-Carlo Beach, will make you feel like you’re living inside a Slim Aarons photograph. Place du Casino, 98000, Monaco

Hôtel Martinez: One of the Riviera’s most famous grand hotels, Hôtel Martinez has been welcoming some of the Cannes Film Festival’s biggest stars since the late 1920s. Just this year, it unveiled a complete redesign inspired by the hues of the sea and the property’s Art Deco glamour. Its two-Michelin-starred restaurant, La Palme d’Or, alone is worth the detour. The hotel also owns La Plage du Martinez across from the infamous La Croisette Boulevard, a breezy beach club with a restaurant and bar. 73 Boulevard de la Croisette, 06400 Cannes, France

La Réserve: Ramatuelle, near Saint-Tropez, is a quiet enclave near the hustle and bustle of the French Riviera’s buzziest destination. La Réserve, a lush property perched atop a cliff overlooking the Mediterranean, is the ideal spot for those wanting to be close to the action, but not in it. 736 Chemin des Crêtes, 83350 Ramatuelle, France

La Colombe d’Or: Book a table here months in advance for lunch—it will be worth the trip. Located in the tiny village of Saint-Paul-de-Vence, between Nice and the Alpes Maritimes, this family-owned inn boasts an idyllic courtyard restaurant overlooking the region’s rolling hills. The menu is simple, but the ingredients are incredibly fresh. The property is also peppered with art from Chagall, Calder, Matisse, and Picasso—who were all regulars back in the day. Place du Général de Gaulle, 06570 Saint-Paul-de-Vence, France

Noväa Social Food: When in Cannes, start your day at Noväa Social Food. The brand-new vegetarian café, tucked away on a quiet street in the center of the city, serves up fresh coffee, baked goods, acai bowls, and salads in a casual but trendy atmosphere. Sit outside and enjoy a cappuccino and a pastry—your life will be complete. 3 Rue des Frères Casanova, 06400 Cannes, France

La Réserve à la Plage: On Saint-Tropez’s Pampelonne Beach, just a skip away from the infamous Club 55, La Réserve à la Plage is an entirely redesigned beach bar and restaurant with Tropezian boho vibes. Have a long, rosé-fueled lunch in the shade, take a dip in the crisp sea, sunbathe lazily, and browse at the club’s beach shop for the ultimate relaxing afternoon. Chemin de l’Epi, 83350 Ramatuelle, France

Eden-Roc Restaurant: Just because you’re not staying at the Eden-Roc, arguably the French Riviera’s most famous hotel, doesn’t mean you shouldn’t treat yourself to an indulgent meal. The outdoor restaurant overlooks the hotel’s iconic infinity pool, the subject of many Slim Aarons photographs. While you’re there, take a walk around the Sentier du Littoral, which circles the idyllic Cap d’Antibes. And if you’re in the market for something a touch more low-key, the Plage Keller Restaurant le César is also excellent. Boulevard J. F. Kennedy, 06160 Antibes, France

Mada One: Your first stop in Monaco should be at Mada One, a new pink-hued café and wine bar at One Monte Carlo. Open from morning until after happy hour, the spot serves everything from pastries, coffee, and apéros to mini sandwiches, fish accras, and meatballs. It’s the perfect place to pop in for a quick midday snack or afternoon drink. Promenade Princesse Charlène, 98000, Monaco

Ômer: Another brand-new eatery in Monaco is Ômer, Alain Ducasse’s latest concept. The world-famous chef started his career at Hôtel de Paris, where he still holds three Michelin stars for his Louis XV restaurant. But across the hall, this comparatively laid-back eatery serves specialties from across the Mediterranean. Expect a full gamut of flavors from Greece, Lebanon, France, Malta, Tunisia, and more. Place du Casino, 98000, Monaco

Elsa: Monaco is clearly not short on Michelin-starred restaurants. But if you must choose only one, we recommend an alfresco lunch at Elsa, the world’s first 100 percent organic Michelin-starred spot. Overlooking the sea at Monte-Carlo Beach, the restaurant serves up fresh, local Monegasque dishes like smoked scallops, green asparagus, and black tagliolini. Av. Princesse Grace, 98000, Monaco

Club 55 Boutique: If you brave the crowds of Club 55, make sure to stop by its shop, a beachy, bohemian bazaar filled with straw bags, colorful towels, striped pillows, and linen cover-ups. La Résèrve à la Plage, nearby, has a similarly treasure-filled store. 43 Boulevard Patch, 83350 Ramatuelle, France

Parfumerie Fragonard: If you’re in the mood for another day trip, head north to Grasse, France’s perfume capital, where Fragonard, the city’s most famous perfumery, has shops, museums, and factories all open to the public. A veritable feast for the senses. 20 Boulevard Fragonard, 06130 Grasse, France

The French Riviera spans many villages, each with its own charm, so it’s worth having at least a week to explore. The westernmost point, Saint-Tropez, has glitzy beach vibes and is the closest base camp to explore Isle-sur-la-Sorgue. Slightly quieter is Saint-Raphaël, where you can spend a few days doing nothing but taking dips in the sea, eating the freshest food, sipping rosé, and reading novels.

Cannes is one of the most accessible cities from the international airport outside of Nice. There, expect all the glamour from the Cannes Film Festival to linger long after it’s gone. Spend a day at La Plage du Martinez, where you can enjoy the sun in a buzzy but laid-back atmosphere, then take a day trip to L’Abbaye de Lérins, a grand abbey on an island just off of the city’s port.

We also suggest spending 24 hours in Saint-Juan-Les-Pins and Cap d’Antibes, home of the famous Eden-Roc Hotel, where you can take a leisurely walk along the cape for breathtaking views. If you’re up for it, skip town for a day to visit the Maeght Foundation in Saint-Paul-de-Vence, a modern art museum with stunning gardens filled with sculpture from Calder and more. Getting hungry? Have lunch at La Colombe d’Or. While in Nice, spend an afternoon at the Marché aux Fleurs Cours Saleya.

As you’re making your way to Monaco, be sure to stop by the beautiful villages of St.-Jean-Cap-Ferrat and Èze. Once in Monaco, tour more than just the casino. The Exotic Gardens, perched on the cliffside, are worth a visit, as is the old town near the palace. If you are staying at Hôtel de Paris, some rooms will give you access to Monte Carlo Beach’s beach club (as well as its tennis and golf clubs), so spend a day away from the hustle and bustle in the quieter areas. Finally, treat yourself to dinner at Ômer and finish off the night listening to live music at Le Bar Américain.

Editor’s note: This trip was provided courtesy of La Compagnie. All opinions are the editors’ own.