The Design Lover’s Guide to London

So much more than fish and chips. 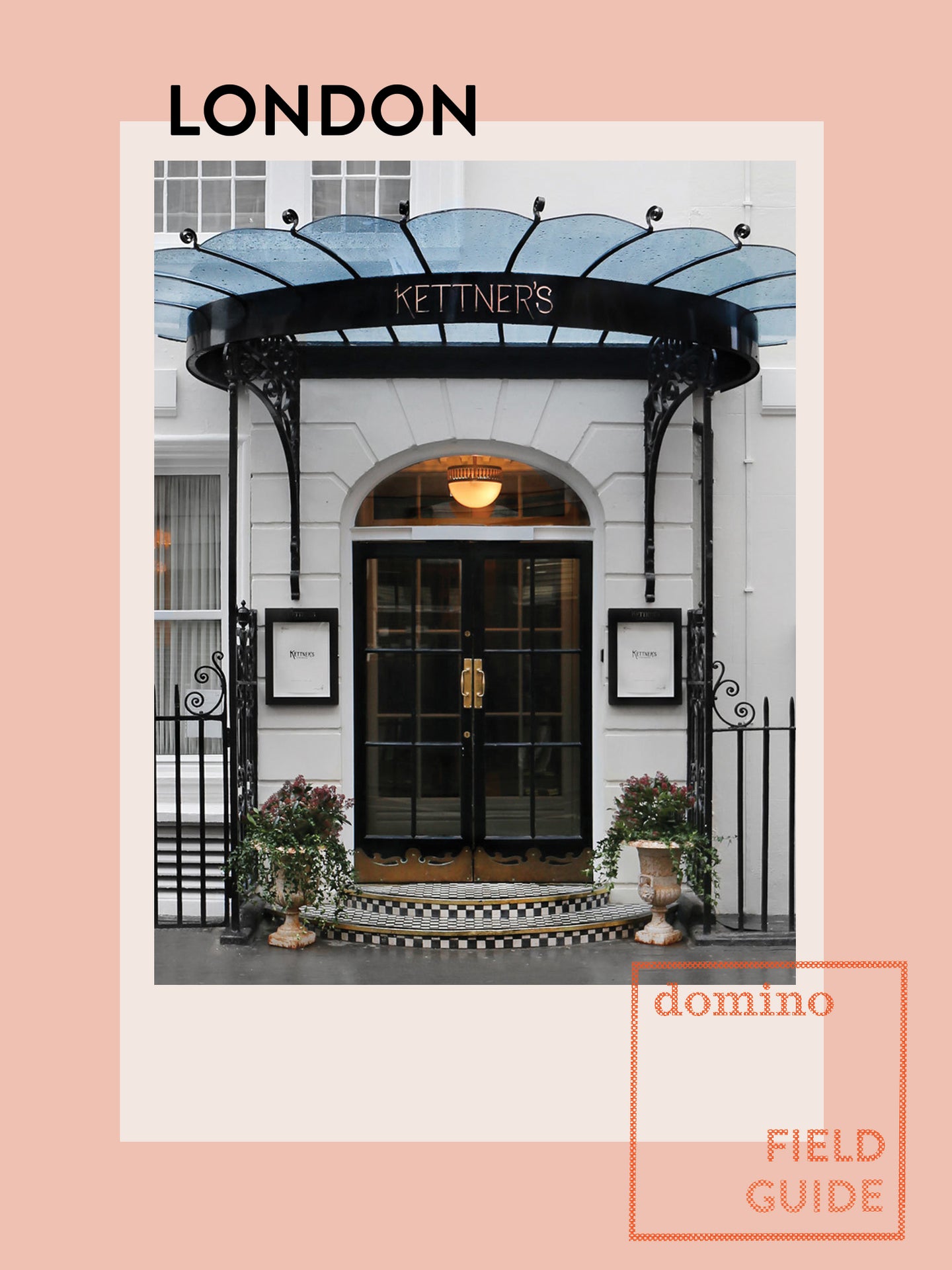 There’s nothing quite like getting lost in a new city, but when you only have days (or hours) to explore, it helps to have a curated list from travelers you trust. That’s where Domino’s Field Guide comes in. Compiled by editors and design-minded locals around the globe, consider this a need-to-know edit of the coolest bars, hotels, restaurants, galleries, and boutiques in the top design cities. Next up: London.

Whether you’ve never been to London or have visited a handful of times, the British capital never ceases to charm and delight. The quaint black cabs, the townhouse-lined streets, the sun sheepishly peeking through the clouds on occasion and yes, the firetruck red double-decker buses and phone booths peppered through the metropolis. But beyond Buckingham Palace, the Thames, and the (always delectable) fish and chips, the city also thrives with cutting-edge fashion, world-class art, and a buzzing food scene.

If you’ve already hit all the main tourist attractions, it’s time to see London in a whole new light: Dine in establishments once frequented by Oscar Wilde and Agatha Christie, try Michelin-starred West African food, and lose yourself on the antique shop-lined streets of Chelsea. At night, see a play, stop into the Connaught Bar for a history lesson in cocktail making, and try one of the city’s most-impressive new restaurants. You’ll feel right at home in this buzzy city with old-world charm.

Kettner’s Townhouse may have reopened last year, but it has a long history in London. Once frequented by the listed of Oscar Wilde, Agatha Christie, and Winston Churchill, the Soho property was reimagined to the utmost detail by Soho House last year. Inside, the vibe is 1920s glamour with a champagne bar and a must-visit French restaurant. The 33 rooms are opulent with floral wallpaper and rust-colored velvet seating—some even have a tub in the room. Even if you don’t stay there, the restaurant, with its impeccable service and French fare, is worth the detour.

The Ned opened up in 2017 to much fanfare—it was the first Soho House–developed property to branch out from the collection of private clubs. The hotel counts its own private clubs (one in a former bank vault), a gym, and a spa, along with 10 restaurants and bars. Housed in a former bank in London’s financial district, the offerings on the property more than make up for the slightly off-the-beaten-path location. Inside, an old-world glamour reigns—live musicians play in the lobby nightly and the rooms are plush with wood-paneled walls, marble bathrooms, and fully stocked bars.

In the heart of Soho, you’ll find Kit Kemp’s newest property, Ham Yard. The interior designer—whose husband is the owner of Firmdale Hotels—has made a name for herself by decorating the couple’s eight hotels in her quintessential quirky British style—classic yet filled with pattern and color. Guests can enjoy a drawing room, library (with an honesty bar), rooftop terrace, spa, gym, theater, and bowling alley. The hotel’s restaurant and bar are worth a detour even for those not staying on site.

Located slightly outside of central London to the west is White City House, Soho House’s newest hotel property in the British capital. Housed in the former BBC Television Centre, the hotel is filled with memorabilia from the yesteryear of media. On the roof, a pool to rival Shoreditch House welcomes guests to mingle and play, while the restaurant and club have the classic plush Soho House vibe people have come to love.

Yotam Ottolenghi’s newest restaurant is a pure delight. A slight departure from his signature Middle Eastern fare, the chef’s seventh London restaurant in Fitzrovia focuses on a vegetable-focused menu with a fresh focus on fermentation and cooking over fire in a Scandinavian minimalist atmosphere. On the menu, parsnip and pecorino croquettes and crumpet lobster toast open up the appetite for a heartier fare of confit mushrooms, chalk stream trout, and Jerusalem grill.

In Marylebone, one of André Balazs’ most coveted property is housed in a former fire station. Also a hotel (albeit sometimes a pricey one), Chiltern Firehouse is worth the visit whether you stay at the hotel or not. The Michelin-starred restaurant, which is reached by crossing a charming courtyard (and an oyster trolley, no less) and going down a series of passageways, has an exclusive and lively feel. Sit at the chef’s counter for the full experience.

Touted as one of London’s hottest openings, Two Lights in East London is the city’s first real “Modern American” restaurant. Opened by the same group that operates the Michelin-starred Clove Club, the inventive menu reaches far beyond the expected avocado toast. Instead, the dishes—made for sharing—include crab and elderflower on beef fat chips, sea bream tartare, lamb ribs, and more.

Late last year, this exciting contemporary West-African restaurant received a Michelin star. The goal of Ikoyi’s owners: to bring the region’s flavors to the fine dining stage. The Sophie Ashby–designed restaurant is as much a feast for the eyes as it is for the palate, boasting terra-cotta pendant lights and citrine velvet banquettes. On the menu, plantain, raspberry salt, and smoked scotch bonnet; melon and beetroot; and crab Jollof rice will surprise and delight.

In Mayfair Casely Hayford to experience a beautiful British fashion brand. Browns for a curated boutique version of Net-a-Porter. Liberty London for a historic department store with flair. Anya Hindmarch for whimsical and colorful leather goods.

Start your day with a coffee at Farm Girl Cafe in Notting Hill and walk the quaint colorful townhouse-lined streets before they swell up with tourists. Stroll down Portobello Road for vintage and antique stores. Walk (or Uber) across Kensington Gardens into Chelsea, where you’ll find the famed Harrods department store, Saatchi Gallery, and some of the best interior stores on Pimlico Road—not to mention beautiful streets lined with red brick townhomes.

In Mayfair, you’ll find all the glitz and glamor—high-end boutiques, the famed Annabel’s private club, and the world-renowned Connaught Hotel. Stroll down Savile Row for the best in men’s fashion and stop at Fortnum & Mason for quintessentially English biscuits and tea. If you’re feeling peckish, stop by Rovi for seriously delicious Middle Eastern Fare. If you’re in the mood for traditional afternoon high tea, stop by Kettner’s Townhouse’s dining room.

After a long day of walking around, briefly freshen up at your hotel before heading back out for a play—The Curious Incident of the Dog in the Nighttime is a smash hit. Head out afterward for a late-night dinner at one of the many Soho restaurants or sit at Chiltern Firehouse’s chef’s counter. If you fancy a nightcap, head to Experimental Cocktail Club in Chinatown or head east to Shoreditch for a night on the town.

Discover more of our favorite locales: 6 Sunny (and Nearby) Destinations to Escape the End-of-Winter Lull A Design Lover’s Field Guide to Upstate New York This Quaint New England College Town Might Be the Next Big Travel Destination