We're dressing up this brunch favorite with bold spices and untraditional twists! 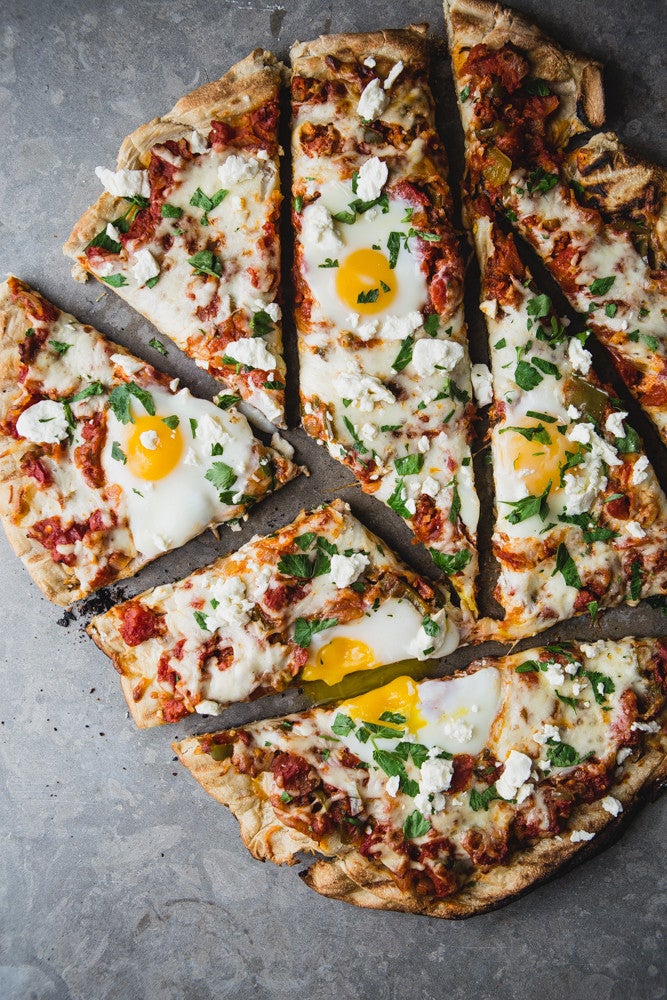 It’s easy, it’s Instagrammable, and it’s delicious: we all know and love shakshuka. Originally from North Africa, the dish has become wildly popular worldwide in recent years. Though classic shakshuka is a simple skillet meal of eggs poached in an aromatic tomato sauce, there are myriad ways to customize it to your liking. Read on to discover our favorite recipes so far!

Spice up your shakshuka (literally) with this variation, roughly inspired by huevos rancheros. With added peppers and crumbled queso blanco, this dish brings the heat. Serve it in tortillas for the ultimate culinary fusion experience.

Loaded with chickpeas, tomatoes, and sweet potatoes – which are spiralized for a gourmet touch – this shakshuka is definitely healthy. Which means it’s totally acceptable to balance out the nutrition with a healthy serving of sourdough bread.

Take the shakshuka out of the skillet without sacrificing flavor. It’s all about presentation with this recipe, which features individualized shakshukas nestled in spiralized potato bases. This unique twist is sure to impress your brunch guests!

If you’re not feeling the extra carbs, serve your shakshuka in mini skillets. This variation makes it easy to personalize each serving, so if you have someone who has dietary restrictions they can tailor their portion to suit their needs.

Because everything tastes better in pizza form. This creative approach to the dish incorporates all the traditional flavors of shakshuka with the added bonus of more cheese —you can’t have pizza without mozzarella— and a smoky grilled pizza crust.

Aptly described as the lovechild of shakshuka and a Full English, this one-pan skillet meal is the best of both worlds. All the components of an English breakfast are infused with the aromatic sauce of traditional shakshuka, coming together to create one perfect breakfast.

The traditional recipe gets a simple upgrade that makes a major difference. Adding prawns (or customizing the recipe with your favorite meat) makes this dish heartier and therefore perfect for an easy weeknight dinner.

“Shakshuka” means “a mixture” in several Arabic languages, and it’s often customized with whatever ingredients are on hand. Cashew Kitchen’s variation was born from what she had lying around in her pantry, resulting in an Indian-inspired take on the dish. How pretty is the bright color from the beetroot?

This fall-flavored dish is one you’ll definitely want to make year-round. The sweetness of the pumpkin paired with the creamy texture of the goat cheese dubs this shakshuka the ultimate comfort food.

The best part of this shakshuka focaccia is the built-in bread base that’s perfect for soaking up the tomato sauce and egg.

Go for a Greek twist by adding spinach and feta to your shakshuka. The greens make it a little healthier than the standard dish while still keeping it rich and luxurious.

Green shakshuka is rapidly becoming almost as well-known as the classic version, and with good reason. Loaded with veggies and packed with that signature cumin flavor, it’s sure to make a bold statement on your brunch table.

Another fusion of culinary cultures that works well, this shakshuka effortlessly mimics one of Italy’s most famous dishes. The anchovies in the dish add a delicious salty flavor that you’ll love even if you’re not the biggest anchovy fan.

A galette is like the elegant cousin of pizza, and this shakshuka galette is like a fancier, healthier version of the skillet meal. This recipe is surprising easy to prepare and is a fun upgrade to the breakfast favorite.