This DIYer Saved Nearly $1,000 by Stenciling Her Favorite Wallpaper Pattern

All you need is paint and patience. 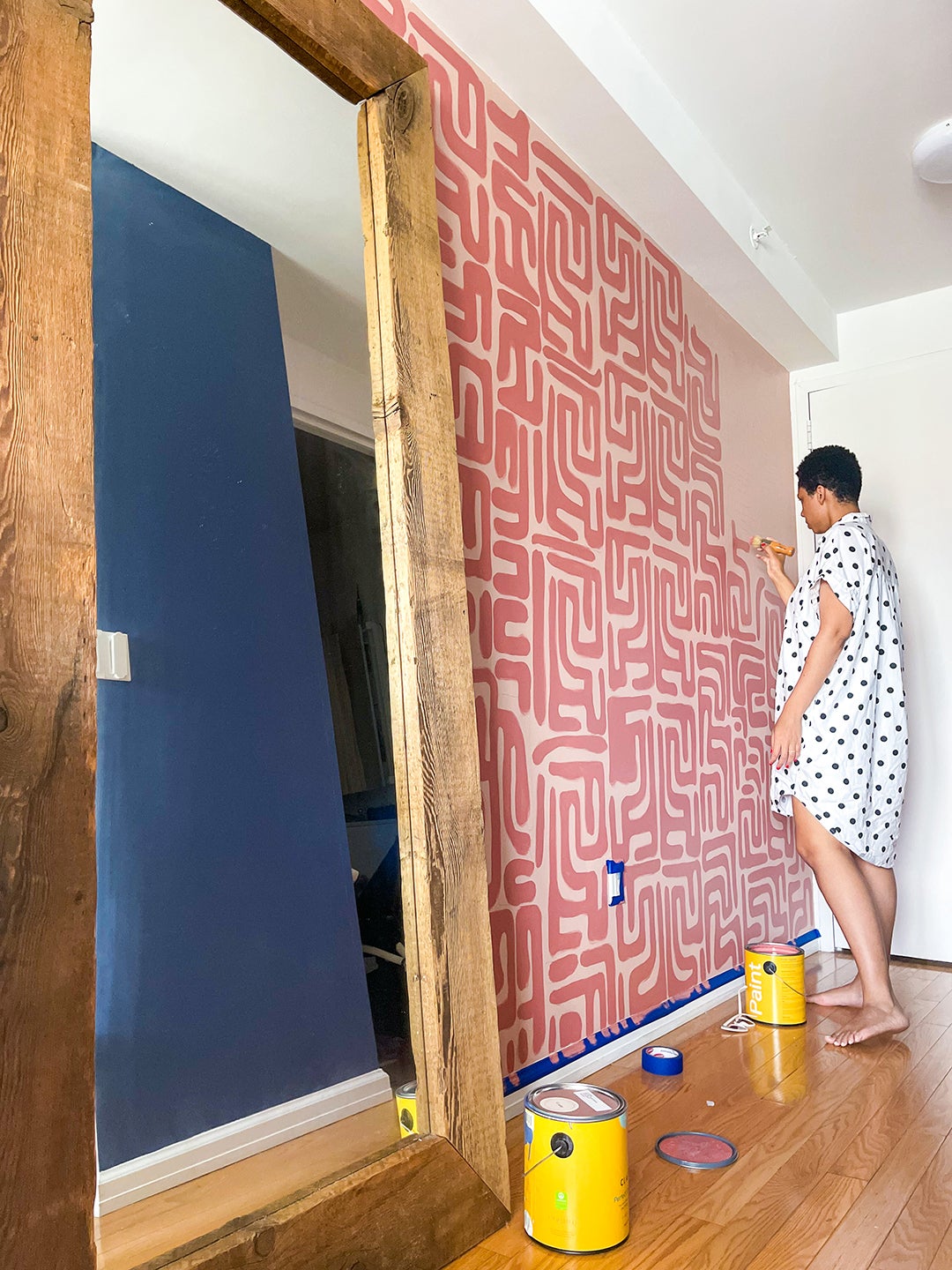 When Dinah Eke finally grew tired of the awkwardly long (and boringly blank) wall in her bedroom, she assumed wallpaper would be the simplest solution to spice up the space. But after falling head over heels in love with St. Frank’s Kuba cloth–inspired design, the project took a complicated turn. Not only did the heavyweight print require a traditional paste application (a risky install Eke wasn’t willing to try, given the fact that her Long Island City home is a rental), but she would need to purchase nearly $1,000 worth of material to fully cover the 12-by-9-foot surface. “It was crazy,” she says. “As much as I loved it, it was too much.”

Not afraid of a little DIY, Eke decided to replicate the pattern with paint. At first she figured she could project the motif onto the wall and trace it, but she quickly realized the sizing would be difficult to maintain. Inspired by designer Carmeon Hamilton’s own murals, she made a stencil instead. That’s the beauty of this type of project, says Eke—if you can’t find what you like, you can always create it. She is confident you could do the same with any geometric graphic, but her biggest words of advice: Don’t sweat the small steps—just have fun. If you mess up, you can always paint over it.

Every tool needed to complete this accent wall—aside from her Clare paint picks, Meet Cute and Pink Sky—can be purchased on Amazon:

Both Eke and her husband are from West Africa, and although St. Frank’s take on Kuba cloth, a woven raffia material, isn’t specific to the region, it had the meaning she was searching for. “It’s a nice nod to our heritage,” she explains.

Eke selected Mylar sheets for the material’s milky transparency—being see-through made it easier for her to trace the pattern and apply the paint—but you could use anything, even cardboard, as long as it’s sturdy enough. Eke went with a 12-by-24-inch Mylar option to best capture the print’s larger proportions, and after tracing the pattern with a marker, she cut it with her hobby knife set.

Step 3: Paint Your Base Color

As with any paint project, Eke taped up her baseboards before rolling on the base coat. Reflecting, she argues the whole project could have been completed in a weekend’s time. However, being a mom meant tackling the wall in between school hours, her work schedule, naps, and bedtimes, extending the finish date by weeks. One way to save on time? Paint a smaller wall, she jokes.

Step 4: Trace and Cover Your Cutout

Hands down, the most time-consuming part of the process was tracing the stencil onto the wall. Eke recommends stenciling with a mechanical pencil—the graphite is super light and easily hidden with just one coat, whereas the No. 2 carpenter’s pencil she used halfway through the project was harder to mask.

She was meticulous about lining everything up perfectly at the start, but once the brush was in hand, she decided to take a more freehand approach. “The stencil was more like suggested lines to follow rather than a hard-and-fast rule,” she says. And after trying out three different brushes, the 6.5-inch rounded style ended up being her favorite. To avoid bleeding, she applied just a small dab of paint at a time.

Step 5: Touch Up as Needed

Once the paint was dry, she went over a few spots to smooth out any edges and redo mistakes. “It was definitely a labor of love, and it has completely changed the room,” says Eke, who’s still impressed by how velvety smooth the Clare paint went on (people on Instagram were shocked to discover it wasn’t wallpaper). “The gratification was instant,” she adds. “It brings me so much joy.” Her kids, who helped out here and there, love it (and her husband, who was hesitant about the pink, doesn’t totally hate it either). Little does he know she’s not only toying with the idea of adding stitch marks to the pattern in a darker hue, but using the stencils again on her bathroom shower curtain: “I’ve never done this before, so I’ll let you know how it goes.”