New Outdoor Inspo Alert: An Oasis-Like Hotel Courtyard That Used to Be a Parking Lot

Get the look with lanterns, marble, and more. 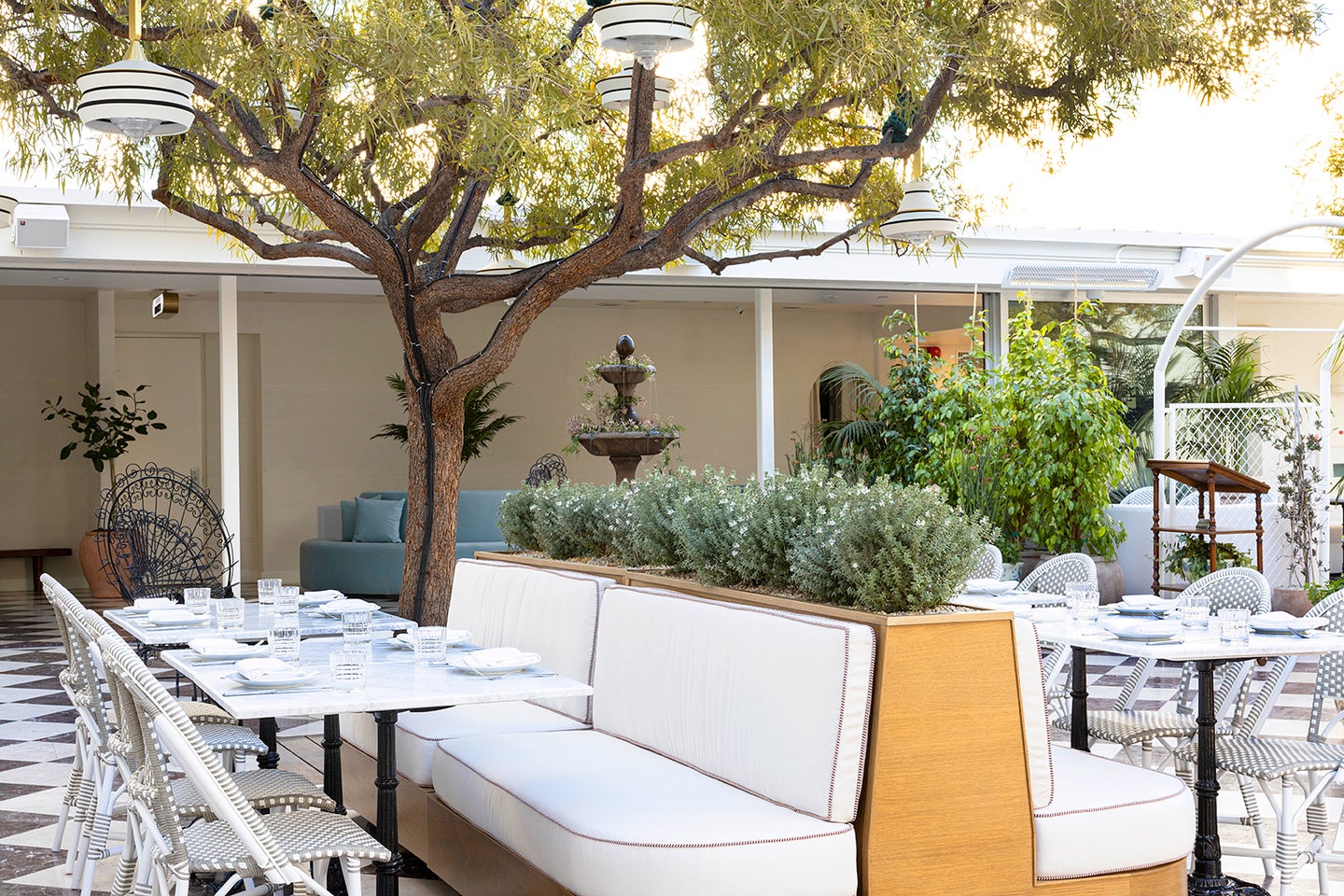 An old parking lot in West Hollywood is no longer. In fact, it’s entirely the opposite: An expansive stretch of white and red marble (nearly 3,000 square feet!) has replaced crumbling concrete, thanks to the vision of hotelier Leo Grifka of Grifka Group, who led the transformation of Short Stories, a 66-room boutique hotel that opened in March.

And while everything from the warm terracotta pink paint to the creamy Venetian plastered walls beckons you in, we’re currently pulling all of our decor inspiration from outside. The courtyard and restaurant’s alfresco dining space feel like a hidden oasis, shrouded by lush greenery and dotted with bistro chairs you’re more likely to spot on the streets of Paris. Here’s how we plan to bring the look home to our patios, backyards, and balconies.

Look to Hanging Pendants for Light

Forget threading solar string lights along your fences. We’re even skipping paper globes for this one. Outdoor-rated pendant lamps are the secret to making sunset cocktail hour feel like you’ve stumbled across an outdoor speakeasy. “These lanterns from Italy first caught our eye when we were looking at lighting for the rooms,” says Grifka of the find.

And as soon as they arrived from southern Europe, project designer Kevin Klein of Kevin Klein Design hopped up on a ladder to wrap the plug-in fixtures through the branches of the Rhus Iancea trees. The team concealed the wires by consolidating them into groups before running the cords down the trunk as one. In a way, it’s the reverse of bringing the outdoors in, and rather bringing the indoors out.

As the main seating option, Grifka and Klein created bespoke banquettes as cushy as your living room sofa, with similar curves to the jewel-tone furniture in the hotel’s entrance. Comfort was priority number-one, but knowing that many of these pieces wouldn’t be able to be brought inside come stormy weather, a performance fabric came into play. And from where else other than Sunbrella?

But you won’t spot any actual umbrellas here. Instead, the California-cool dining nooks are strategically placed in the shade beneath the tree canopies, offering natural relief from the hot L.A. sun.

Cover Up Dirt With Tile

Perhaps the most significant way Grifka and Klein blur the lines between indoors and out is beneath your feet. Instead of pavement, grass, or gravel, the duo went with an ultra-luxe marble. Of course, the stone is naturally hard-wearing enough to work as outdoor flooring (and honed to be anti-slip!), but by cutting each into diamond shapes (not squares—the measurements are slightly different and a bit more pricey to get right), the contrast between the material’s white and dark red hues is emphasized. The look is more upscale kitchen than backyard. It’s also the same tile you’ll spot in the lobby entrance. “The flooring that runs from inside to out makes a huge difference in creating a single space,” explains Grifka.

The illusion of your own secret garden can quickly be shattered if your space can easily be viewed by neighbors. Why not take a note from the succulent wall? “The plant wall by the pool was in disrepair when we inherited it. We built it back up and restocked it with plants that could thrive in that space,” offers Grifka. (We’re thinking stronger species such as cacti, if your space is exposed to southern sun, or other drought-tolerant picks like stonecrops.) While this structure is 9 feet high and 20 feet long, you can DIY yourself something smaller or find vertical planter walls online—like these from Home Depot and Amazon—to envelop your space in greenery, just as Short Stories has done.